A powerful winter storm is organizing near the eastern Great Lakes on February 27, 2020, and will slowly lift through southeastern Canada over the next day. Heavy snow and gusty winds will wallop areas from western and Upstate New York into northern New England. Then extremely heavy lake effect snow will pound areas downwind of the Great Lakes, especially off Lakes Erie and Ontario, through Saturday afternoon.

A low pressure complex is currently consolidating and intensifying over the northeastern U.S., NWS forecaster Kong noted on February 27.

Although rain associated with the trailing cold front is moving off the East Coast into the Atlantic, much of New England will remain under the influence of the strong low pressure system for the next couple of days.

Moderate to heavy rain is expected to overspread central New England this morning as the storm center approaches. In addition, as the storm intensifies further, winds will become very gusty, especially when cold air rushes in from the backside of the system after the storm center has passed by.

Northern Maine should see all snow through tonight, accumulating to over 30 cm (1 foot) in parts of the area before gradually tapering off on Friday, February 28. 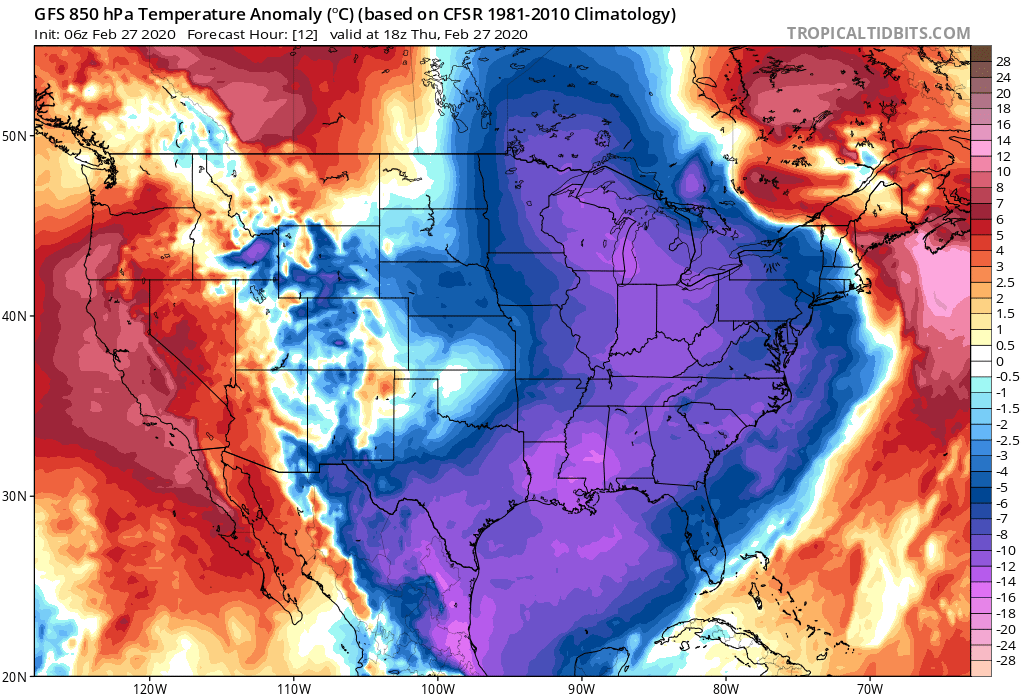 Over upstate/western New York, a major lake-effect snow event is expected to begin today once the storm center passes east of the area as cold and blustery westerly winds blow across the still warm lake waters.  Over two feet of snow is possible downwind of Lake Ontario through Friday morning.

Blizzard warnings are in effect over parts of Western New York state downwind from Lake Erie and Lake Ontario.

The snow should become less intense by Friday as the storm edges slowly further into Canada.

Over the northern Rockies to the northern High Plains, a clipper low pressure system will bring a quick round of rain or mixed precipitation across the central Plains through today, reaching the central and southern Appalachians on Friday in the form of wet snow, which may linger into Saturday morning.

Meanwhile, moisture from the next Pacific system is forecast to reach the Pacific Northwest later on Friday, and could reach the Intermountain West as snow and snow showers by Friday night.