A vigorous, slow-moving monsoon trough over northern Queensland, Australia is extending from Townsville to Gregory Springs into a deep, semi-stationary tropical low, located about 200 km (124 miles) north of Mount Isa. It will remain active this week, with further heavy and intense rainfall expected for already saturated catchments. Exceptional and record-breaking rainfall has already flooded the region and the potential for significant and dangerous flash flooding will continue for areas between Ingham and Bowen, possibly extending as far south as Mackay from Monday, February 4, 2019.

The rain continued over the next couple of days and further intensified over Ingham and Townsville, dropping over 500 mm (19.6 inches) of rain in a 24-hour period to 09:00 LT, February 3.

"Most of that fell after sunset, with rates of more than 100 mm (3.93 inches) per hour recorded in Ingham and surrounds," Higgins Storm Chasing reports. "The continuous rainfall over Greater Townsville has also lead to the City recording its wettest week in history – beating the Night of Noah by over 100 mm!"

In January 1998, when the ‘Night of Noah’ occurred, Townsville recorded 913.2 mm (35.9 inches) in a 7-day period which including the Night of Noah itself (548.8 mm / 21.6 inches overnight). The Townsville Airport recorded 886.2 mm (34.8 inches) during that 7-day period as well – this is believed to be the wettest 7-day period for Townsville since records began in the area, Higgins explained, adding:

"The current 7-day period has recorded 1 012 mm (39.8 inches) which has clearly beaten this milestone quite comfortably!"

.@MarlinaWhop with the latest on the flooding emergency in North Queensland. Townsville Airport has just cancelled all flights. #qldweather #7News pic.twitter.com/QaDAnqeojE

Townsville Mayor @crjennyhill: All we can do now is make sure we’ve got everyone working together … Our main aim now is to protect human lives.

Police and @DeptDefence soldiers working together to help residents who want to relocate before more water comes.  #teamwork #bigwet pic.twitter.com/o7nsXuJnEn

At 07:10 UTC (18:10 EST) on February 3, BOM's office in Queensland issued a Major Flood Warning for Ross River. "Risk to life and property: Dangerous and high velocity flows will occur in the Ross River Sunday night into Monday. Unprecedented areas of flooding will occur in Townsville."

Emergency services have received hundreds of call for assistance as flood waters continue to rise through the night and ADF members have launched boats into the streets of Idalia, in Townsville’s south, searching for any lights on or residents in need of rescue, the Townsville Bulletin reports.

17 000 properties across Townsville are currently without power.

Residents in flood-affected suburbs are being warned that the Bureau of Meteorology has increased its rainfall prediction over the Ross River Dam catchment overnight and into tomorrow morning.

RISK TO LIFE AND PROPERTY

The Ross River dam spillway gates have now opened to their full setting. This setting will release approximately 1 900 m3 (67 000 ft3) of water per second out of the dam. Dangerous and high velocity flows will occur in the Ross River Sunday night into Monday. Unprecedented areas of flooding will occur in Townsville. Expect access routes to be cut. 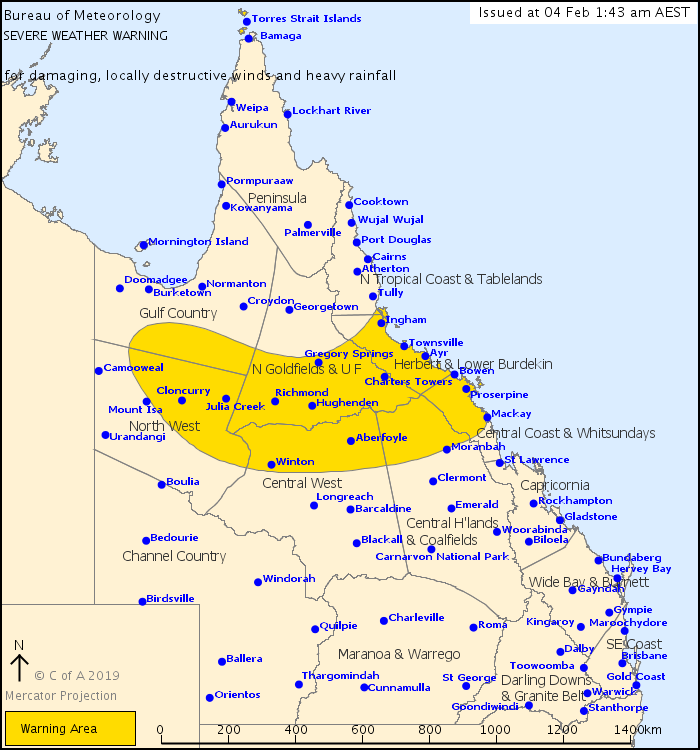 Everyone in the above suburbs should ensure they move away from riverbanks and get to higher ground. Residents still in their homes in these suburbs should move to the highest ground in their dwelling.

A map of potential inundated properties has been released by Townsville City Council. If you require evacuation assistance, contact SES on 132 500. For life-threatening emergencies call 000. For more information listen to local radio, phone 1800 738 541 or visit Councils Emergency Management Dashboard disaster.townsville.qld.gov.au

The Ross River dam spillway gates have now opened to their full setting. This setting will release approximately 1 900 m3 of water per second out of the dam. River levels downstream at Black Weir are rising and just below the moderate flood level (2.50 m / 8.20 feet).

Stream levels along the Black River and Bluewater Creek are easing with both below the minor flood level. Renewed rises similar to those recorded in previous days are possible with further heavy rainfall.

Remember: If it's flooded, forget it. For flood emergency assistance contact the SES on 132 500. For life-threatening emergencies, call Triple Zero (000) immediately. Current emergency information is available at www.qld.gov.au/alerts

The monsoon trough may remain slow-moving or drift shift slowly south over the next day or two. It will remain active this week, with further heavy and intense rainfall expected for already saturated catchments. The potential for SIGNIFICANT and DANGEROUS FLASH FLOODING will continue for areas between Ingham and Bowen, possibly extending as far south as Mackay from today.

HERBERT AND LOWER BURDEKIN AND CENTRAL COAST AND WHITSUNDAYS DISTRICTS:

For the remainder of today, further heavy rainfall with six-hourly rainfall totals between 150 mm to 200 mm (5.90 – 7.87 inches) are likely. Concentrated areas of intense rainfall with totals up to 300 mm (11.8 inches) possible, particularly with bands of thunderstorms.

Creek and river catchments are already saturated and will, therefore, respond extremely rapidly to any rainfall. Landslides have been reported with this event and will continue to be possible in vulnerable areas that have experienced significant rainfall.

Damaging wind gusts up to 100 km/h (62 mph) are also possible about the coast and ranges. Locally destructive winds in excess of 125 km/h (78 mph) may occur with thunderstorms, however, this threat is more likely to be confined to coastal areas.

A number of major Flood Warnings are current for this region – please refer to http://www.bom.gov.au/qld/warnings/

For the remainder of today, heavy rainfall, which may lead to localised flash flooding, is expected over parts of the northwestern interior (west of Julia Creek) and eastern interior (east of Gregory Springs) of the state. Six-hourly rainfall totals of 70 mm to 120 mm (2.75 – 4.72 inches) are possible.

Damaging wind gusts up to 90 km/h (56 mph) are also possible to the south of the monsoon trough and tropical low.

Locations which may be affected include CHARTERS TOWERS, CLONCURRY, JULIA CREEK, GREGORY SPRINGS, WINTON AND HUGHENDEN.

Flood Warnings are current for this region – please refer to http://www.bom.gov.au/qld/warnings/

Queensland Fire and Emergency Services advises that people should:

* Move your car under cover or away from trees.
* Secure loose outdoor items.
* Seek shelter, preferably indoors and never under trees.
* Beware of fallen trees and powerlines.
* Never drive, walk or ride through flood waters. If it's flooded, forget it.
* Keep clear of creeks and storm drains.
* For emergency assistance contact the SES on 132 500.

Warnings are also available through TV and Radio broadcasts, the Bureau's website at www.bom.gov.au or call 1300 659 219. The Bureau and Queensland Fire and Emergency Services would appreciate warnings being broadcast regularly.