Models are now in good agreement on the development a potentially dangerous weather situation across parts of the Tyrrhenian sea and the island of Sardinia, Severe Weather Europe warns.

Latest model guidance suggests the today’s convective activity, associated with a weak upper low across the region, will result in rapid cyclogenesis and the formation of a medicane over the Tyrrhenian tonight (September 19 into 20), within weak wind shear environment and over a very warm Mediterranean sea.

According to reports and footage sent to Environment Canada, there is a possibility that an extremely rare tornado formed near Hayward Lake in Lower Mainland, B.C. on September 16. If confirmed, this will be the 5th tornado in British Columbia over the past 15 years.

After further investigation, there was evidence of rotation on Doppler radar suggesting a F0 tornado, however, the status will remain "possible," the agency said September 18.

The last reported tornadoes in the Lower Mainland occurred near Coquitlam on May 1, 1988, and another near Pitt Meadows on March 10, 1991, both F0.

We received reports & footage of a possible tornado near Hayward Lake (NW of Mission, BC) on the afternoon of Sept 16, 2018. After further investigation, there was evidence of rotation on Doppler radar suggesting a F0 tornado, however the status will remain "POSSIBLE". #BCstorm pic.twitter.com/McFz3rkdM9

At least 2 people were found dead and 6 remain missing as of September 19. At least 11 people have been injured and more than 10 houses destroyed.

A body of missing person in Mae Hong Son’s mudslide was found in the Moei River but has not yet been identified. Six persons remain missing as the search continues along the rivers until Friday. @TNAMCOT pic.twitter.com/67J9bUBc4B

Elevated seismicity that started at Semisopochnoi volcano on September 16, prompting AVO to raise the Aviation Color Code to Yellow and the Volcano Alert Level to Advisory, has intensified on September 17.

A strong tremor signal at 20:49 UTC (12:49 AKDT, September 17) suggested that ash emissions may be occurring or are imminent at Semisopochnoi, forcing AVO to raise the Aviation Color Code to ORANGE and the Volcano Alert Level to WATCH.

Unrest continued at Semisopochnoi volcano on August 18 with nearly constant tremor being recorded by local sensors.

Seismicity on September 19 remained elevated and has changed from constant tremor to intermittent, discrete tremor bursts over the past 7 hours, AVO reported 21:02 UTC. No volcanic activity was observed in cloudy satellite data over the past day, and no activity has been detected in regional infrasound data.

A severe storm caused intense flash flooding in the city of Constantine, northeastern Algeria on September 19.

The strongest quake in the sequence so far is M5.8 on May 15. This is also the largest earthquake ever recorded in the archipelago.

This swarm is just one of many significant events media is paying no attention to. Read more about it here. 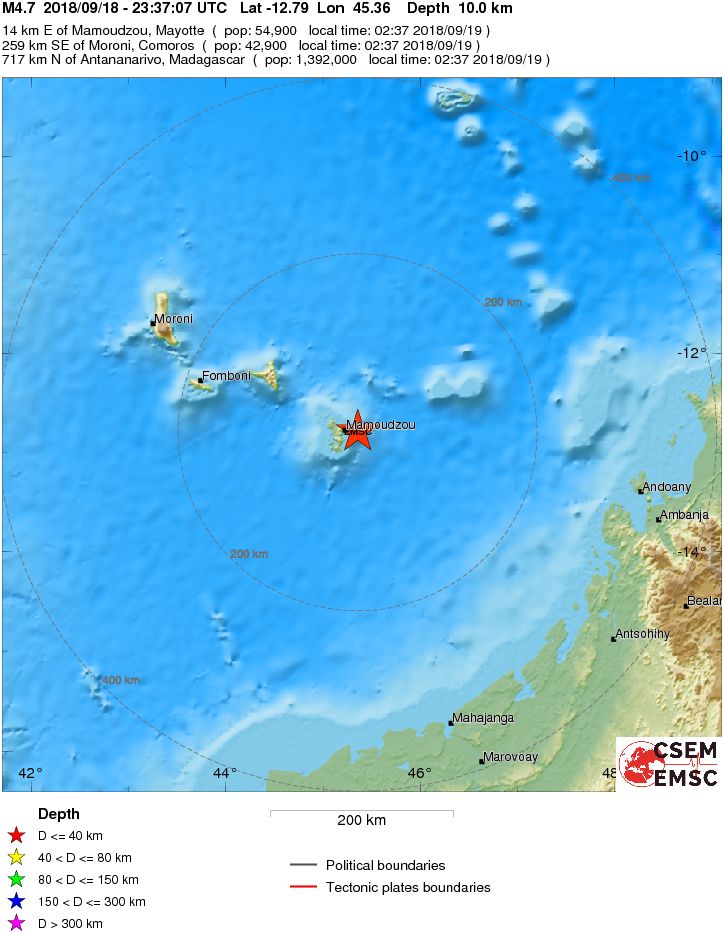 The twisters were captured off Cap Esterel, Cote d'Azure in southern France on September 17.

According to reports, the average price of a pint in the UK could go up by more than 50p. A rise in production costs of about 16% is also expected to hit major brewers such as Heineken and Carlsberg.

"The price of grain has shot up dramatically over the summer because the heatwave has hit crops all over the world," Jonathan Arnold, of grain traders Robin Appel, said.

At the same time, world barley stocks are at their lowest levels since 1984, according to the report by investment bank Berenberg.

Government orders study on drying up of rivers, wells in post-flood Kerala

With rising temperatures and abnormal drying up of rivers and wells reported in flood-hit Kerala, the state government has decided to conduct scientific studies on the post-flood phenomenon in the state.

A series of issues including soaring mercury level, unprecedented dip in water level of rivers, sudden drying-up of wells, depletion of groundwater reserves and mass perishing of earthworms have caused widespread concern in various parts of Kerala after the devastating deluge last month.

Many rivers including Periyar, Bharathapuzha, Pampa and Kabani, which were in a spate during the days of flood, are now getting dried up and their water level has decreased abnormally. Besides the drying up of wells, their caving in was also reported in many districts.

While it seems the phenomenon is new, this has been happening since at least May 2018. Way before recent massive flooding.

Snowy Mountains highway was closed at one end due to bushfire and nearly shut down at the other following snow, The Guardian reports.

According to aid workers and official government tests, a total of 128 people have now been confirmed infected with the disease, spread by mosquitos.

Officials fear efforts to rein in the disease will be complicated by the arrival of the rainy season next month.

An outbreak of cholera declared on September 6 has killed at least 30 people and infected at least 5 460.

The most severely affected areas are the two epicenters of the outbreaks in the suburbs of Glenview and Budiriro in western Harare.

The outbreak has spread from Harare to Chitungwiza, and west to Gokwe and Bulawayo and is reportedly spreading to different areas of the country.

Cold outbreak is becoming increasingly likely in Europe after September 20

Global models are in fairy good agreement of a sharp change in the weather as soon as at least one (possibly two) cold outbreaks are seen on the maps, Severe Weather Europe meteorologists report.

On the other side, ECMWF model is having only one strong cold front early next week. Both agree in MUCH colder airmass to spread far south across central Europe, Balkan peninsula and Mediterranean sea.

Nearly 45% of fruits and paddy crops have suffered damage due to the recent hailstorm that hit areas of Sopore and Handwara in north Kashmir, the RisingKashmir reports.

The Apple rich town Sopore has suffered around 35% damage to fruit and paddy crops due to the hailstorm, according to officials. Some 7 to 9% of fruit crop and 15 to 25% of paddy crop has been damaged in Handwara in Kupwara district.

Storm Ali swept across Ireland and UK on September 19, bringing wind speeds of more than 160 km/h (100 mph) and wreaking havoc on power supplies and roads. At least two people have been killed and several seriously injured.

A woman died after her caravan was blown off a cliff at Claddaghduff in Ireland's Galway County. Another person died after being hit by a falling tree in Armagh County.

Two people have been left dead by a massive storm in the UK. Among them, a woman who died after a caravan was blown off a cliff. @laurelirving7 #StormAli #7News pic.twitter.com/qGFfb10C27