There was no a cyclonic system and the heavy rains were caused by a wind discontinuity from Tamil Nadu to South interior Karnataka, he told PTI.

Heavy rain is expected to continue for two more days, the center said.

In what has become the wettest September on record for Dallas-Fort Worth, several cities across North Texas recorded impressive rainfall amounts, Dallas News reports.

Lamont Bain, a National Weather Service meteorologist, said some areas of North Texas may have received even more than Bonham in places with no official gauges.

Huge fire in the town of Heraklion, Crete, Greece

Students have been evacuated from University of Crete after a fire broke out in its building in Heraklion on September 23. Huge plumes of smoke were visible kilometers away.

At least 5 people have been killed and 9 others are still missing after major flash floods hit the town of Periban in the state of Michoacan, officials said Monday, September 24, 2018.

Flash floods took place after unusually heavy rain swelled the Cutio River and sent a wall of floodwater as high as 1.5 m (5 feet) crashing through the streets of the mountainous town of Periban on September 23, carrying away vehicles and trees.

The Bhakra Beas Management Board (BBMB) issued an advisory to the Punjab government that it will release 'excess' water from the Pong dam in the wake of incessant rains in catchment areas of the Beas river, The Time of India reports.

Educational institutes have been ordered to remain closed on Tuesday in Punjab. Schools have also been closed in Doda district of Jammu and Kashmir and in most places of Himachal Pradesh.

This bus was washed away by a flooding river in Himachal Pradesh. It was empty at the time.

At least 4 people have been killed as remnants of the first medicane of the season – Brian – dropped heavy rain on Tunisia over the past couple of days, causing catastrophic flash flooding.

Severe thunderstorms first hit the country on September 19 but rains intensified towards the end of the week.

Some areas of the country, like the northeastern city of Nabeul, received as much as 200 mm (7.9 inches) of rain on Saturday, September 22, 2018, according to information provided by the National Institute of Meteorology. This is half the country's annual precipitation, ministry spokesman Sofiene Zaag told AFP news agency on September 23. Up to 225 mm (8.85 inches) was measured in Beni Khalled.

This is the heaviest rainfall to hit the region in such a short period since 1995 when precise measurements began.

The storm threatens Japan's Ryukyu Islands and Taiwan on September 28 and 29.

Another large sinkhole has opened at Inskip Point beach in Queensland, Australia overnight September 24, 2018. This is the same beach where a sinkhole opened up on September 26, 2015, swallowing several vehicles and tents.

The hole was spotted from the air on Monday morning (September 24) by Diana Journeaux from Rainbow Beach Helicopters. "It wasn't there when we flew over on Sunday," she said.

Local skipper said they could see the hole forming. "We could see stirred up water and the beach eroding," he said, adding that it was about 100 m (330 feet) wide when they moved away.

According to a statement released by the Ministry of Ecology, a mud volcano erupted in Haradag district of Baku in Azerbaijan on September 23, 2018.

The eruption started during the early morning hours of Sunday, September 23 and it still continues, the ministry said in a statement released Sunday morning.

Numerous fissures were reported during the eruption, with depts up to 40 m (131 feet).

Activity at the Indonesian volcano Anak Krakatau is not unusual as eruptions have occurred sporadically over the past few decades, EO reports. It is somewhat unusual, however, for satellites to get cloud-free views, as they did in September 2018. 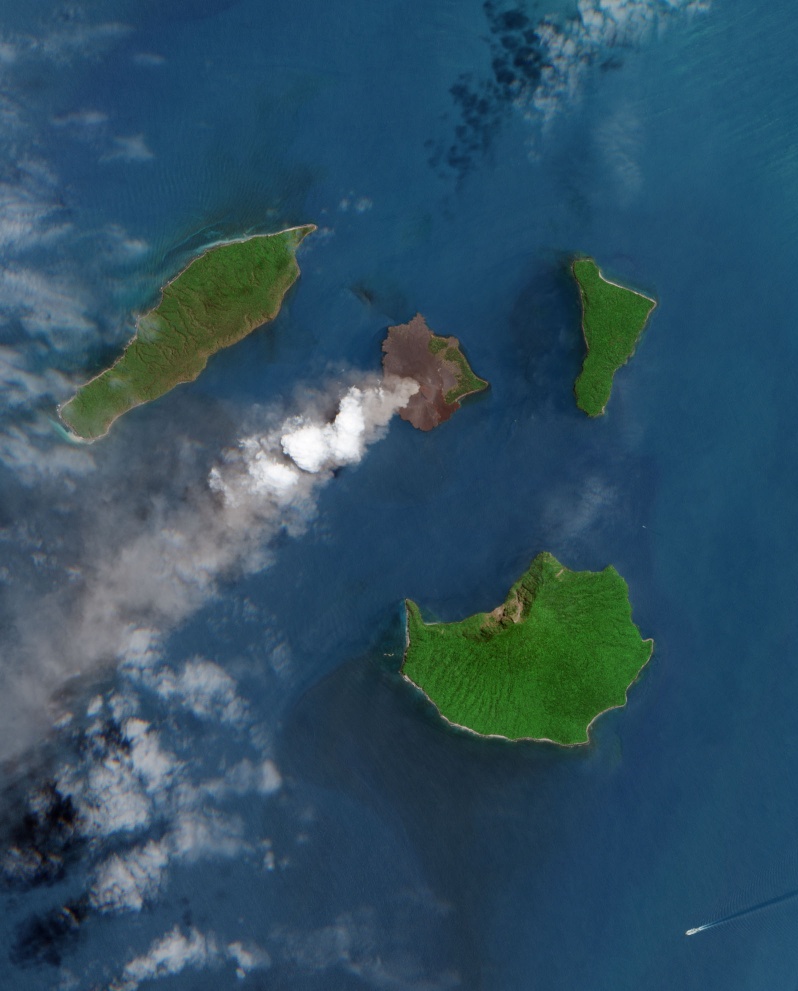