Remnants of the first medicane of the season – Brian – dropped heavy rain on Tunisia on September 22, causing catastrophic flash flooding.

Heavy rain hit Dallas-Fort Worth area through Friday night, September 21, flooding about 40 homes. Few places in the east received as much as 203.2 mm (8 inches) of rain.

A 23-year-old man drowned late Friday night after being swept off a bridge near the University of Texas at Arlington.

The same weather system that affected Dallas-Fort Worth flooded and made temporarily impassable dozens of Oklahoma roads on Friday afternoon.

Multiple water rescues were reported in Johnston and Pontotoc counties.

Kuwait’s Ministry of Interior has appealed to citizens and motorists to be vigilant due to poor weather conditions and low visibility in some areas, especially those exposed because of the increased dust in the country.

Inside the tornado near Ottawa, Canada

Severe thunderstorms accompanied by large hail and a destructive tornado swept through eastern Ontario and into Quebec during the afternoon hours of September 21, 2018.

The storm left widespread power outages, three seriously injured people of which one is in critical condition and more than 60 damaged homes.

Several close-up videos of the tornado have emerged on September 22.

On the current forecast track, the center of this system is forecast to approach St. Vincent and the Grenadines by late next week.

St. Vincent and the Grenadines Meteorological Services asked all residents and agencies to closely monitor its approach and advance their preparedness over the next few days. 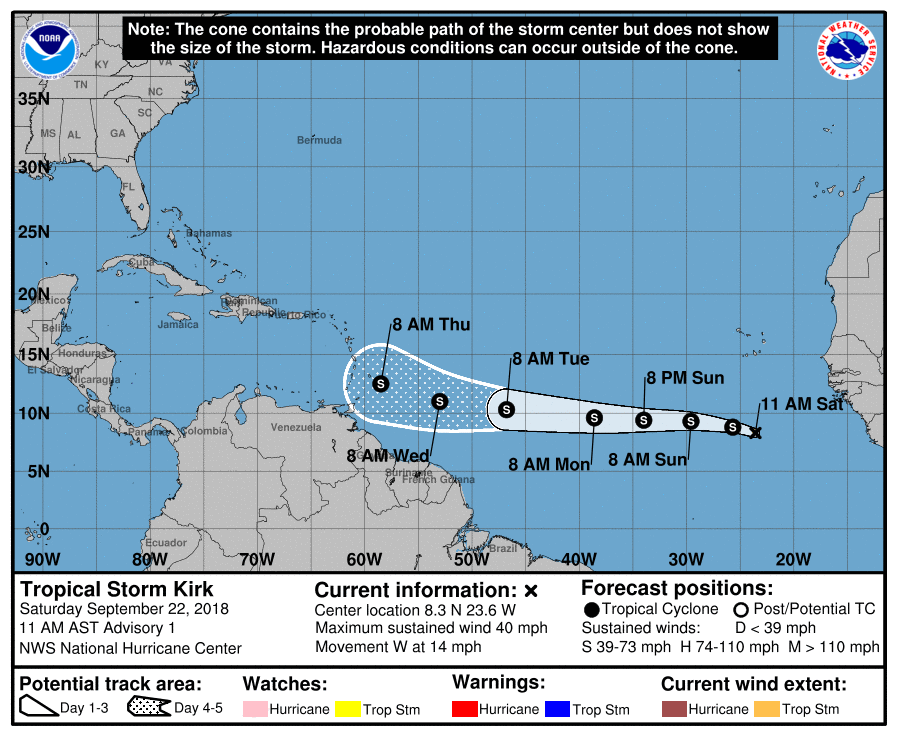 A bright fireball streaked across the sky over Ural, Russia at 21:54 UTC on September 17 and was recorded by several people and meteoric patrol camera owned by Ilya Jankowski.

The event was followed by a sonic boom.

Ebola outbreak in the Democratic Republic of Congo

One new confirmed case of Ebola Virus Diseases (EVD) has been reported in a village at the shores of Lake Albert at the border to Uganda, ECHO reports. This new confirmed case has been in contact with EVD in the city of Béni. Avoiding medical follow-up including vaccination in Béni, the person fled to Kasenye village in the Tshomia health zone close to Bunia city in Ituri province.

This new EVD case at the shores of Lake Albert is an aggrieving factor for this 10th Ebola outbreak in the DRC. The lake is well known as a trading route between the DRC and Uganda.

In addition, violent conflicts in Ituri Province have displaced over 350 000 people internally and pushed some 75 000 Congolese into Uganda in 2018, crossing Lake Albert in order to seek refuge. This population movement in close vicinity of this new EVD case is worrisome.

With this new EVD case, there are now eight health districts in the DRC that are affected by the current Ebola outbreak in North Kivu and Ituri provinces. This latest confirmed case is almost 200 km (124 miles)away from the nearest other case.

Follow-up of contacts of confirmed and probable cases is a top priority to cut the transmission chains of the outbreak and remains a major challenge in such difficult context.

On September 22, after four months of closure due to the eruption of Kilauea volcano, the park opened access to 14 roads and trails, as well as a few other tourism mainstays like the Kilauea Visitor Center and the park bookstore. However, several other pathways and buildings will remain closed due to possible earthquake damage and await further assessment.

Officials said the park the eruption caused worst damage the park has seen in its 102-year history.