Tropical Cyclone "Marcus" formed March 16, 2018 as the 8th named storm of the 2017/18 Australian region tropical cyclone season. Marcus passed over Darwin as a Category 2 system on the Australian tropical cyclone intensity scale with sustained winds near the center of 95 km/h (59 mph) and wind gusts to 130 km/h (80 mph) as it moved southwest.

Marcus battered the city with strong winds and heavy rain, bringing down trees and power lines and shutting down local water supply. Emergency services urged residents to stay inside until the system passes.

This storm will continue to bring heavy rainfall and higher than normal tides through the area, which could produce some minor flooding of low-lying areas, BOM warns.

The cyclone warning zone is from Cape Don to Cape Fourcroy and Point Stuart to Mitchell Plateau in WA, this is where gales, sustained winds greater than 60 km/h (37 mph) can be expected in the next 24 hours.

It will then re-intensify into a Category 2 system as it moves through the Timor Sea and brings destructive winds as it approaches the north Kimberley coast during Sunday, March 18.

There is a cyclone watch for areas from Mitchell Plateau to Cockatoo Island, where gales are possible in the next 24 – 48 hours. This system is likely to affect northern parts of the Kimberley and not move as far south as previous systems this season. 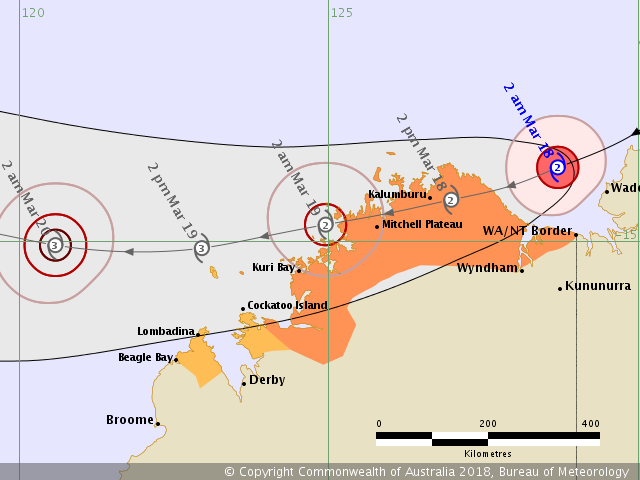 There is still some uncertainty about the movement of this system and the intensity may also change depending on the track taken, with a possibility it may become stronger if it spends a long time over water.

Tropical Cyclone "Marcus" will also be bringing some heavy rainfall with it over much of the northwest Top End today and extending into northern and western Kimberley tomorrow. With daily totals of 100 – 150 mm (3.9 – 5.9 inches) possible through some areas.

Flood watches are current for northwest coastal rivers of NT and catchments north of Derby in the north and west Kimberley Districts. 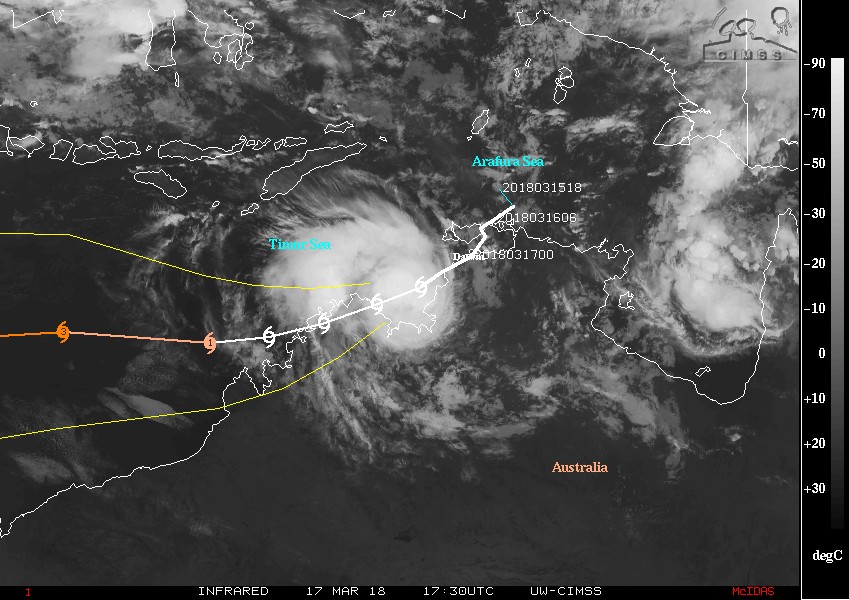 BOM forecasters said that the weather situation, as with many cyclones, can change very quickly and urged residents to listen to the advice of emergency services and stay up to date with the latest warnings and forecasts.