The Earth’s interior is still a mystery to us. While we have sent missions to probe the outer reaches of our solar system, the deepest boreholes on Earth go down to only a few kilometers. The only way to learn what’s going on deep inside our planet, in the core and the mantle, is by indirect methods.

Many of us might have seen those beautiful pictures of our round, blue planet taken from space, but did you know that our planet actually looks like a bumpy potato? It has its own share of deformations, non-uniform gravity because of the unequal distribution of mass and occasionally, mountains and valleys created by the movements of tectonic plates. Considering that around three-fourths of our planet’s surface is made up of oceans, these deformities affect the shape of the oceans too. If we removed the tides and currents from the oceans on the planet, they would settle onto a smoothly undulating shape called a geoid, rising wherever there is high gravity, and sinking where gravity is low, creating what are known as “geoid anomalies”. These highs and lows are generated by uneven mass distribution within the deep Earth.

"The existence of the Indian Ocean geoid low is one of the most outstanding problems in Earth Sciences,” said Attreyee Ghosh, an assistant professor at the Centre for Earth Sciences, Indian Institute of Science, in Bangalore, India. "It is the lowest geoid/gravity anomaly on Earth and so far no consensus existed regarding its source. It is remarkable as it means that there is some mass deficit in the deep mantle that’s causing the low.”

In a recent study accepted for publication in Geophysical Research Letters, a journal of the American Geophysical Union, Ghosh and her colleagues, in collaboration with researchers from the GFZ German Research Centre for Geosciences, Germany, explored the reasons behind the mass deficit that is causing the geoid low. Several studies in the past have tried to explain this, most of them attributing it to a remnant of an earlier plate that dived into the Earth’s mantle beneath another plate millions of years ago. However, there has been no convincing explanation of the source — until now.

In their study, the researchers used numerical models of mantle convection — a type of movement caused within a fluid where hotter and lighter material rise to the top and cooler and denser material sinks under the influence of gravity. To ‘look’ deep inside the Earth, they used seismic tomography models that use seismic waves to obtain a 3-dimensional picture of the Earth’s interior. 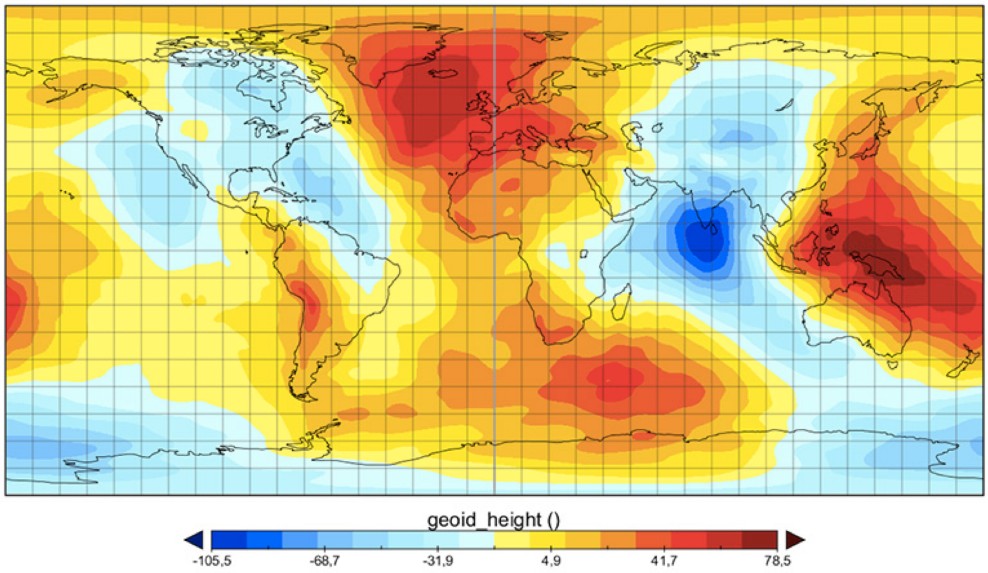 A map modeling the geoid surface. The map shows how water elevation and distribution would change by removing the effects of tides and currents. Credit: European Space Agency

Mantle plumes, upwellings of abnormally hot rock within the Earth’s mantle, are generally thought to be the reason behind such anomalies. But in this case, no known mantle plume exists in this part of the world. To explain this, the researchers had to investigate the neighboring regions of the Indian Ocean geoid low. Interestingly, they found that there was hot material arising from the African large low-shear-velocity province (LLSVP) or the African superplume, that was getting deflected eastward and terminating at the base of the low-density region beneath the Indian Ocean low. The deflection is possibly due to the fast motion of the Indian plate.

"Most of the existing theories have tried to explain this negative anomaly with the help of cold, dense oceanic plates that sank into the mantle in the past”, says Prof Ghosh. "Our study explains this low with hotter, lighter material stretching from a depth of 300 km, or 186 miles, up to ~900 km, or 559 miles, in the northern Indian Ocean, most likely stemming from the African superplume.”

This study is definitely a breakthrough in convincingly explaining the occurrence of the Indian Ocean Geoid Low. As part of future work, Prof. Ghosh and her colleagues would like to investigate the evolution of the geoid low from the past to the present using time-dependent mantle convection models.

Featured image: A map modeling the geoid surface. The map shows how water elevation and distribution would change by removing the effects of tides and currents. Photo credit: European Space Agency