On May 29, 2006, mud started erupting from several sites on the Indonesian island of Java. Boiling mud, water, rocks and gas poured from newly-created vents in the ground, burying entire towns and compelling many Indonesians to flee. By September 2006, the largest eruption site reached a peak, and enough mud gushed on the surface to fill 72 Olympic-sized swimming pools daily.

Indonesians frantically built levees to contain the mud and save the surrounding settlements and rice fields from being covered. The eruption, known as Lusi, is still ongoing and has become the most destructive ongoing mud eruption in history. The relentless sea of mud has buried some villages 40 meters (130 feet) deep and forced nearly 60 000 people from their homes. 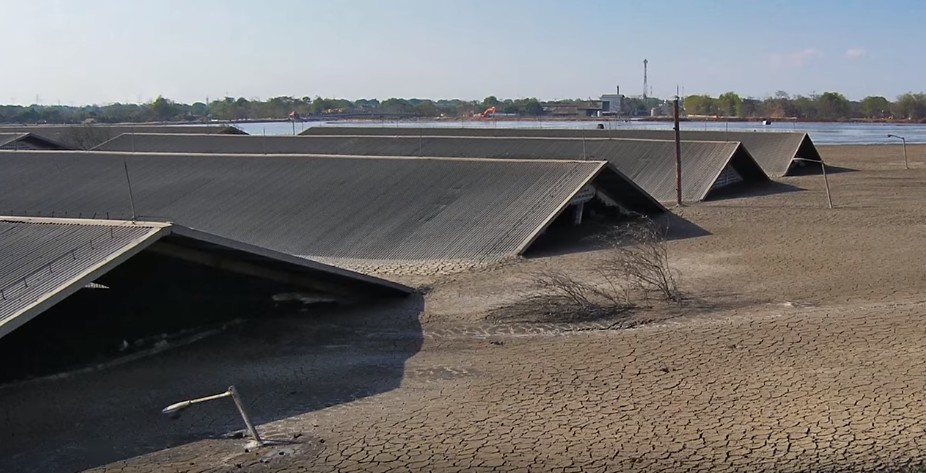 On May 29, 2006, mud started erupting from several sites on the Indonesian island of Java and hasn’t stopped since. The eruption became known as Lusi and is the most destructive ongoing mud eruption in history. Credit: Adriano Mazzini/The Lusi Lab Project.

The volcano still periodically spurts jets of rocks and gas into the air like a geyser. It is now oozing around 80 000 cubic meters (3 million cubic feet) of mud each day – enough to fill 32 Olympic-sized pools.

Now, more than 11 years after it first erupted, researchers may have figured out why the mudflows haven’t stopped: deep underground, Lusi is connected to a nearby volcanic system.

In a new study, researchers applied a technique geophysicists use to map Earth’s interior to image the area beneath Lusi. The images show the conduit supplying mud to Lusi is connected to the magma chambers of the nearby Arjuno-Welirang volcanic complex through a system of faults 6 kilometers (4 miles) below the surface.

Volcanoes can be connected to each other deep underground and scientists suspected Lusi and the Arjuno-Welirang volcanic complex were somehow linked because previous research showed some of the gas Lusi expels is typically found in magma. But no one had yet shown that Lusi is physically connected to Arjuno-Welirang.

The researchers discovered that the scorching magma from the Arjuno-Welirang volcano has essentially been "baking" the organic-rich sediments underneath Lusi. This process builds pressure by generating gas that becomes trapped below the surface. In Lusi’s case, the pressure grew until an earthquake triggered it to erupt.

Studying the connection between these two systems could help scientists to better understand how volcanic systems evolve, whether they erupt magma, mud or hydrothermal fluids.

"We clearly show the evidence that the two systems are connected at depth," said Adriano Mazzini, a geoscientist at CEED – University of Oslo and lead author of the new study in the Journal of Geophysical Research: Solid Earth, a journal of the American Geophysical Union. “What our new study shows is that the whole system was already existing there – everything was charged and ready to be triggered."

Java is part of a volcanic island arc, formed when one tectonic plate subducts below another. As the island rose upward out of the sea, volcanoes formed along its spine, with basins of shallow water between them. Lusi’s mud comes from sediments laid down in those basins while the island was still partially submerged underwater.

Mazzini has been studying Lusi since soon after the eruption began. Two years ago, the study’s authors installed a network of 31 seismometers around Lusi and the neighboring volcanic complex. Researchers typically use seismometers to measure ground shaking during earthquakes, but scientists can also use them to create three-dimensional images of the areas underneath volcanoes.

Using 10 months of data recorded by the seismometers, Mazzini and his colleagues imaged the area below Lusi and the surrounding volcanoes. The images showed a tunnel protruding from the northernmost of Arjuno-Welirang’s magma chambers into the sedimentary basin where Lusi is located. This allows magma and hydrothermal fluids originating in the mantle to intrude into Lusi’s sediments, which triggers massive reactions and creates gas that generates high pressure below Earth’s surface. Any perturbation – like an earthquake – can then trigger this system to erupt.

"It’s just a matter of reactivating or opening these faults and whatever overpressure you have gathered in the subsurface will inevitably want to escape and come to the surface, and you have a manifestation on the surface, and that is Lusi," Mazzini said.

Mazzini and other researchers suspect a magnitude 6.3 earthquake that struck Java two days before the mud started flowing was what triggered the Lusi eruption, by reactivating the fault system that connects it to Arjuno-Welirang.

By allowing magma to flow into Lusi’s sedimentary basin, the fault system could be an avenue for moving the entire volcanic system northward, said Stephen Miller, a professor of geodynamics at the University of Neuchâtel in Neuchâtel, Switzerland who was not connected to the study.

"It looks like this might be the initial stages of this march forward of this volcanic arc," Miller said. "Ultimately, it’s bringing all this heat over toward Lusi, which is driving that continuous system."

Mazzini and other scientists are unsure how much longer Lusi will continue to erupt. While mud volcanoes are fairly common on Java, Lusi is a hybrid between a mud volcano and a hydrothermal vent, and its connection to the nearby volcano will keep sediments cooking for years to come.

"So what it means to me is that Lusi’s not going to stop anytime soon," Miller said.