At 09:00 UTC on October 4, the center of Tropical Storm "Ramon" was located about 165 km (100 miles) SSE of Puerto Angel, Mexico. Its maximum sustained winds are 75 km/h (45 mph). Little change in strength is forecast during the next couple of days. Ramon is a small storm, heading west at 15 km/h (9 mph) with estimated minimum central pressure of 1 002 hPa.

This general motion with some increase in forward speed is expected over the next day or so. On the forecast track, the center of Ramon is expected to move parallel to but remain offshore of the coast of southern Mexico.

There are currently no coastal watches or warnings in effect but interests along the southern coast of Mexico should monitor the progress of Ramon, NHC notes.

Tropical-storm-force winds extend outward up to 55 km (35 miles) primarily to the west and southwest of the center. 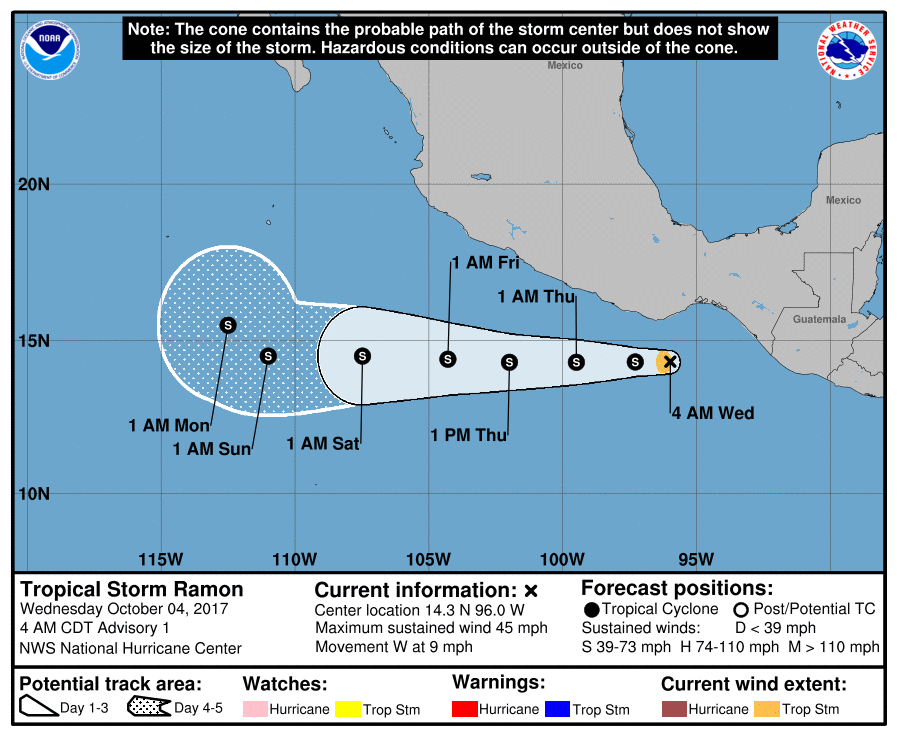 Ramon is expected to produce rainfall amounts of 50.8 to 101.6 mm (2 to 4 inches) with isolated maximum amounts of 152.4 mm (6 inches) over the Mexican states of Oaxaca and coastal Guerrero through Thursday, October 5. This rainfall could cause life-threatening flash floods and mudslides.

Strong gusty winds could occur along portions of the southern coast of Mexico between Puerto Angel and Acapulco during the next day or so.