More than 370 small to moderately strong earthquakes were recorded under San Salvador, the capital of El Salvador, since Monday, April 10, 2017. At least one person has been killed and three injured. Authorities said the shaking is attributed to the movement of local geological faults.

Between 02:13 UTC (20:13 CST) on April 10, when the sequence started with M3.9, and 13:40 UTC (07:40 CST) on April 11, the National Seismic Network of El Salvador registered a total of 375 earthquakes under the Metropolitan Area of San Salvador, the Ministry of Environment and Natural Resources (MARN) said. The epicentral area is located near Antiguo Cuscatlán, department of La Libertad, it added.

Of the total registered earthquakes, 43 have been reported as felt by the population in the capital. The magnitudes range from 1.3 to 5.1 on the Richter scale.

Due to the characteristics of the recorded signals, the origin of this seismic activity is attributed to the movement of local geological faults in the Metropolitan Area of San Salvador, MARN said and added they did not identify any anomalous activity at nearby volcanoes. "At the moment, no volcanic activity is related to this event, however, we are continually monitoring San Salvador volcanic complex," the ministry said. 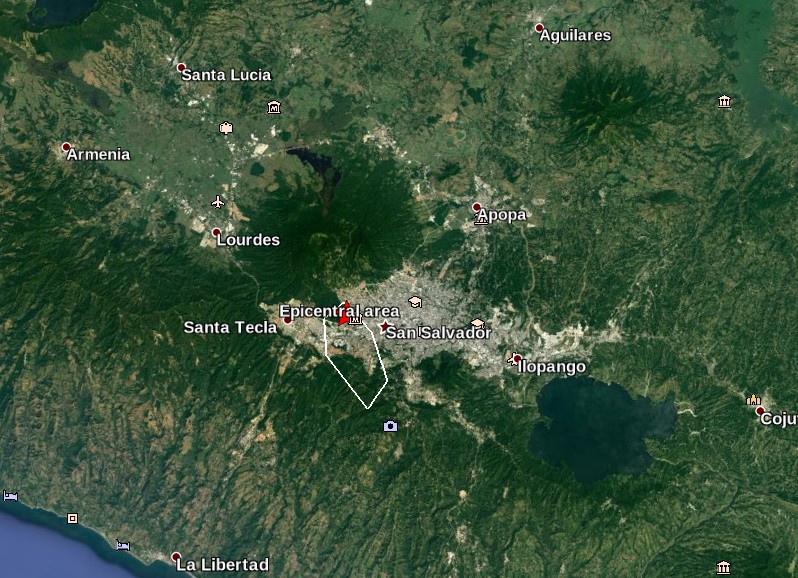 There are reports of landslides and rockfalls following the strongest quake and damage to homes in Santa Tecla and Antiguo Cuscaltan.

One person was killed after a big chunk of rock fell on his car on the Los Chorros road. Three people were injured during the same incident and transferred to a hospital, the national police in Lourdes reported.

The Director General of Civil Protection, Jorge Antonio Melendez Lopez, issued a yellow alert for all of El Salvador due to continued seismicity. The agency also called on the population to remain calm and abide by the recommendations issued by Civil Protection. The Environmental Ministry said seismicity is expected to continue over the next few days and weeks.

Featured image: One person has been killed after a big chunk of rock fell down on his car on the Los Chorros road. Credit: ElSalvador.com