A new research, resulting from the analysis of a 31-year span of NASA's Landsat satellite data, suggests the snowpack of Sierra Nevada will not return to its pre-drought levels before 2019.

The datasets from the period between the 1985 and 2015, have resulted in daily maps of the full Sierra Nevada snowpack, with about 10 times sharper resolution than before. The new data, combined with the other snow survey measurements, collected by the state's Department of Water Resources, enable the time series to extend 65 years back, all the way to 1951.

The scientists utilized probabilistic modeling methods to predict the snowpack water availability. When taking into the account the snowpack deficit, from the drought period between 2012 and 2015, the experts estimated the conditions will most likely not return to pre-drought before 2019. 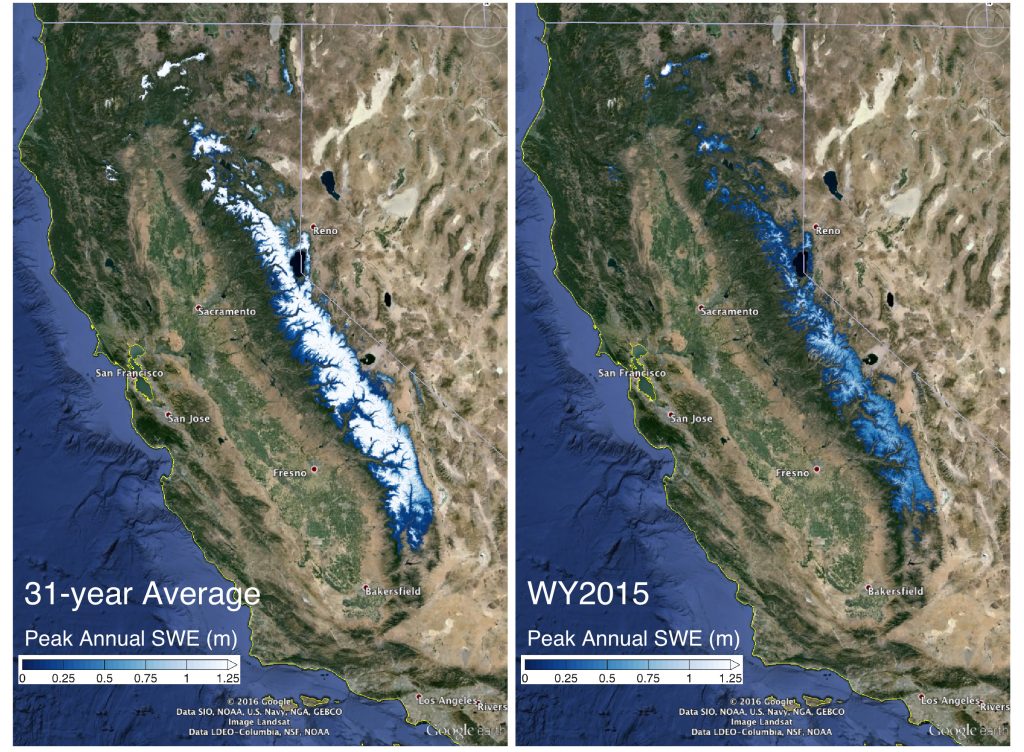 “With the consecutive years of ongoing drought, the Sierra Nevada snowpack’s total water volume is in deficit and our analysis shows it will take a few years for a complete recovery, even if there are above-average precipitation years,” said Steve Margulis, professor of civil and environmental engineering at the UCLA Henry Samueli School of Engineering and Applied Science and the study’s lead author.

California gets large amounts of water from the melt of the Sierra Nevada snowpack. Four consecutive drought years, ending with the 2015 winter, resulted in the largest cumulative drought deficit over the last 65 years. The water volume of the snowpack in 2015 was just 2.9 cubic kilometers (0.7 cubic miles) while during its typical year it measures about 18.6 cubic kilometers (4.46 cubic miles).

This animation shows the change in snow water equivalent in the Sierra Nevada mountains from 1985-2015. Credit: Steve Margulis/UCLA

The scientists have suggested the new method may be useful in characterizing the snowpack water for other mountain regions, like in western North America, the Andes or the Himalayas.

“Our larger goal is to build a very detailed, continuous picture of the historical snowpack, diagnose the primary factors that cause it to vary, and then ultimately improve models for predicting how much water will be available from it. This unprecedented information can help policy makers make more informed decisions with regard to this critical resource, especially as climate change affects it,” Margulis said.