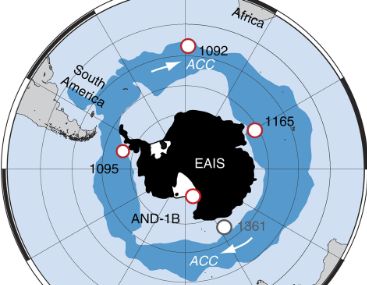 International team of scientists conducted an in-depth research which has finally shed light on my the processes responsible for the dry up of the Mediterranean Sea, about 5.6 million years ago. Research results imply that future melting of large ice masses will results in an uneven sea-level rise across the globe, University of Otago announced on November 11, 2015.

The drying event, so-called Messinian Salinity Crisis (MSC), happened about 5.6 million years ago, and left the basin 1.5 km deep and for approximately 270 000 years. The event has also left behind a few kilometers deep layer of salt caused by seawater evaporation.

Exact cause of the event has been a subject of many fierce scientific debates for years, however, it seems an adequate answer has finally solved the mystery.

Locations of ODP sites 1092, 1095 and 1165 and the AND-1B succession discussed in this study (a). ODP sites are situated in deep water and, therefore, track the strength of deep-ocean circulation in response to ice-sheet growth. The AND-1B succession is on the continental shelf and was directly influenced by expanding ice sheets that eroded sediments from the shelf and resulted in glacial erosion surfaces in the succession. A continuous succession spanning the Messinian was recovered at site 1361, but there is no evidence of a significant change in sedimentation or ocean circulation at this site. (b) Location map of ODP sites 846 and 926 from which deep-sea δ18O records are derived. Image credit: Ohneiser et al, 2015.

A team of researchers led by Dr. Christian Ohneiser, a geologist from the University of Otago, New Zealand have utilized a multidisciplinary approach in their study. They examined 60 sedimentary drill cores from around the edge of Antarctica and used a computer model of our planet which simulated growth of the Antarctic ice sheet to asses its geophysical impacts.

The MSC was first discovered during 1970s and early investigations have come up with the theory that movements of the African, Arabian and Eurasian tectonic plates have caused the Mediterranean to become landlocked. Other theories suggested that a decrease in global sea levels caused by growing ice sheets has caused the sea to separate from the Atlantic Ocean

"We determined that the continent's ice was indeed growing in the lead up to the MSC, but the timings of key events did not precisely match," Dr Ohneiser says.

"We found that the Antarctic ice sheet had an uneven effect on the global sea level because its growth resulted in a complex interplay between gravitational and rotational effects and the deformations to the Earth's crust caused by ice advance and retreat."

"This kept the Mediterranean isolated from the Atlantic Ocean until the crust began to relax and sink. At the same time, Antarctica began to melt, raising sea levels again." 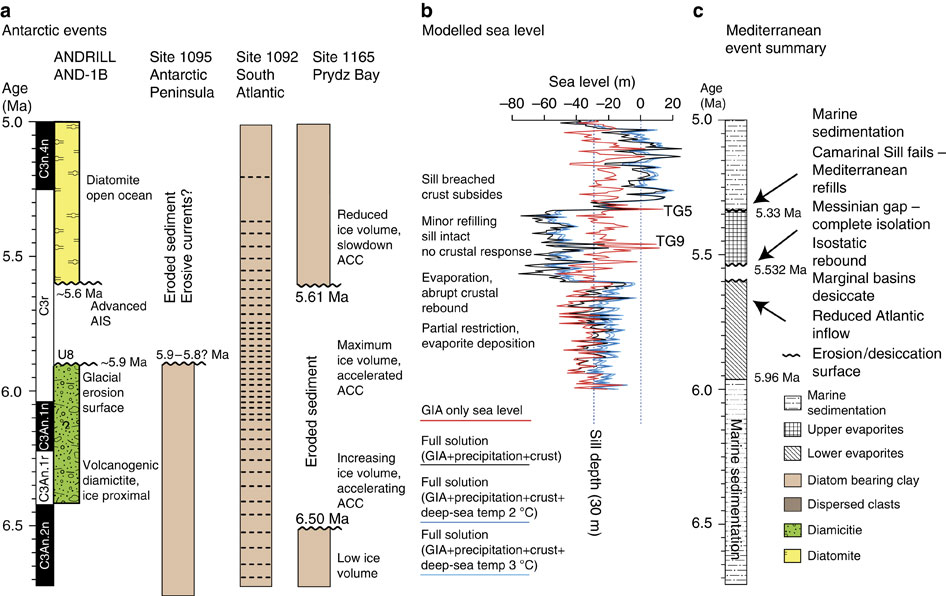 Chronology of (a) Antarctic ice-sheet growth/retreat as interpreted from drill core successions, (b) modelled sea level for Gibraltar Strait and for ODP site 1165 from the benthic δ18O and ice-volume record and (c) Mediterranean desiccation/reflooding events. Sea level at Gibraltar (b) is determined from four solutions: a GIA-only solution with no compensation for deep-sea temperature variations (red), a full solution (black) that includes the influence of salt precipitation and the crustal response and two alternative, full simulations with δ18O-derived ice-volume reconstructions that compensate for a 2 °C (dark blue) and 3 °C (light blue) glacial–interglacial deep-sea temperature component in the δ18O record.​ Image credit: Ohneiser et al, 2015

The sea level began to rise again, and about 5.33 million years ago it was high enough to spill over the thin land bridge at Gibraltar, which resulted in a massive flooding which refilled the sea. This event, known as the Zanclean flooding event, lasted for only a couple of years before fully replenishing the Mediterranean basin.

One of the most important research conclusions is that changes in global sea-level are uneven when ice sheets expand or retreat.

"Future melting of the large Southern or Northern hemisphere ice masses will result in an uneven rise in sea-level around the world, and this should be factored into future climate change scenarios," Dr. Ohneiser concluded.