A decade-long scientific debate about what’s causing the thinning of one of Antarctica’s largest ice shelves has now been settled, European Geosciences Union (EGU) reports. The Larsen C Ice Shelf – whose neighbours Larsen A and B collapsed in 1995 and 2002 – is thinning from both its surface and beneath.

For years scientists were unable to determine whether it is warming air temperatures or warmer ocean currents that is causing the Antarctic Peninsula’s floating ice shelves to lose volume and become more vulnerable to collapse. This new study takes an important step forward in assessing Antarctica’s likely contribution to future sea-level rise.

The research team combined satellite data and eight radar surveys captured during a 15-year period from 1998–2012. They found that Larsen C Ice Shelf, which is some 50,000 km2 in area or about half the size of Iceland, lost an average of four metres of ice, and had lowered by an average of one metre at the surface.

Lead author Paul Holland, a climate scientist at the British Antarctic Survey, says: “What’s exciting about this study is we now know that two different processes are causing Larsen C to thin and become less stable. Air is being lost from the top layer of snow (called the firn), which is becoming more compacted – probably because of increased melting by a warmer atmosphere. We know also that Larsen C is losing ice, probably from warmer ocean currents or changing ice flow. 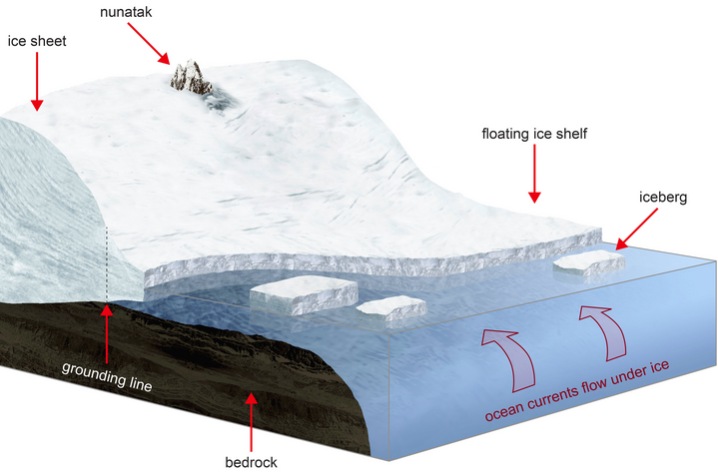 “If this vast ice shelf – which is over two and a half times the size of Wales and 10 times bigger than Larsen B – was to collapse, it would allow the tributary glaciers behind it to flow faster into the sea. This would then contribute to sea-level rise.”

The Antarctic Peninsula is one of the fastest warming regions on Earth, with a temperature rise of 2.5°C over the last 50 years.

The team, who continue to monitor the ice shelf closely, predict that a collapse could occur within a century, although maybe sooner and with little warning. A crack is forming in the ice which could cause it to retreat back further than previously observed. The ice shelf appears also to be detaching from a small island called Bawden Ice Rise at its northern edge.

Glaciologist David Vaughan, Director of Science at British Antarctic Survey, says: “When Larsen A and B were lost, the glaciers behind them accelerated and they are now contributing a significant fraction of the sea-level rise from the whole of Antarctica. Larsen C is bigger and if it were to be lost in the next few decades then it would actually add to the projections of sea-level rise by 2100.

“We expect that sea-level rise around the world will be something in excess of 50 cm higher by 2100 than it is at present and that will cause problems for coastal and low-lying cities. Understanding and counting up these small contributions from Larsen C and all the glaciers around the world is very important if we are to project, with confidence, the rate of sea-level rise into the future.”