For the first time, satellite mapping of Latin America shows that the continent's agricultural expansion has waned in the wake of the global economic downturn, according to UBC research.

"Nearly every agricultural region across Latin America slowed down in expansion from 2007 to 2013, compared to the previous six years," says Jordan Graesser, the study's lead author. Graesser is a visiting international student at UBC's Liu Institute for Global Issues and the Institute for Resources, Environment and Sustainability. 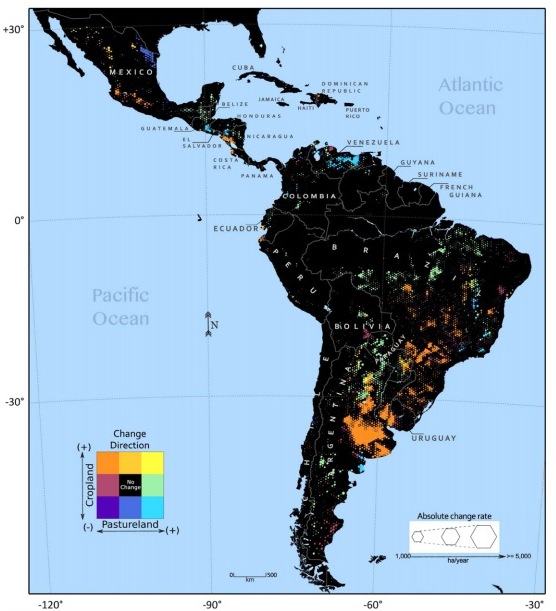 The study, recently published in Environmental Research Letters, involved the first large-scale mapping of changes in cropland and pastureland over more than a decade at the continental scale, using satellite imagery.

The slowdown is notable, given that agriculture in Latin America expanded faster over the past few decades compared to any other region on earth. The growth was fuelled by the continent's "Green Revolution" in the 1960s, where agricultural innovations, such as the development of new seeds, increased crop yields. 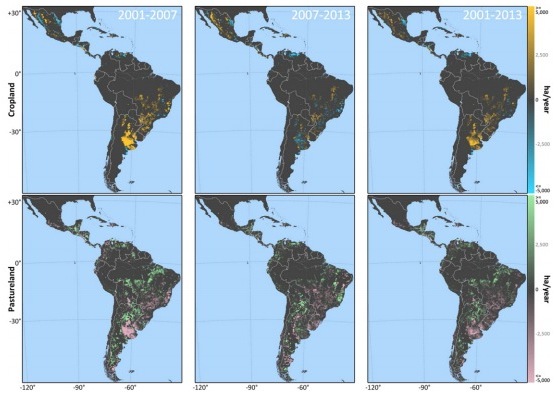 But the agricultural decline revealed by the study may not last. "Agriculture in Latin America is tied to global commodity prices," says Graesser, also a PhD student at McGill University's Department of Geography. "So if the global economy continues to recover, and if crop prices increase, there's likely going to be more expansion – which could impact biodiversity and boost carbon emissions."

Soy production is the key driver of cropland expansion in South America. Much of the soy grown there is used to feed poultry and pigs in China, where the consumption of meat has surged as the population gains affluence. Pasture expansion is driven by the growth of beef cattle production, fueled by exports to Europe and increasing domestic consumption.

Biofuels are another driver of cropland expansion in some Latin American countries. For example, sugarcane from Brazil is used for biofuel production.

The study, "Cropland/pastureland dynamics and the slowdown of deforestation in Latin America," is published in Environmental Research Letters. Graesser's co-authors are T. Mitchell Aide from the University of Puerto Rico, H. Ricardo Grau from the Universidad Nacional de Tucumán and Navin Ramankutty from UBC's Liu Institute for Global Issues and the Institute for Resources, Environment and Sustainability.

The study used 13 years (2001-2013) of satellite imagery to quantify cropland and pastureland expansion across Latin America. Cropland, the more intensive practice, refers to the growing of row crops such as soy, maize, wheat and cotton. Pastureland refers to grassland ecosystems that are grazed by livestock – primarily beef cattle in Latin America.

Brazil's Cerrado and Atlantic Forest regions, and Argentina's Humid Pampas region, experienced the greatest increase in new cropland from 2001-2013. The southern and eastern borders of the Brazilian Amazon and the Dry Chaco region (the latter stretches across Paraguay, Bolivia, Argentina and Brazil) had the largest amount of new pastureland.

Source: The University of British Columbia