A new study led by NASA's glaciologists Jay Zwally, says that an increase in Antarctic snow accumulation that began 10 000 years ago is currently adding enough ice to the continent to outweigh the increased losses from its thinning glaciers. The research challenges the conclusions of other studies, including the Intergovernmental Panel on Climate Change’s (IPCC) 2013 report, which says that Antarctica is overall losing land ice.

While Zwally confirms the new study is essentially in agreement with other studies that show an increase in ice discharge in the Antarctic Peninsula and the Thwaites and Pine Island region of West Antarctica, he points out that their main disagreement is for East Antarctica and the interior of West Antarctica. "There, we see an ice gain that exceeds the losses in the other areas,”  Zwally said and added that his team “measured small height changes over large areas, as well as the large changes observed over smaller areas.” 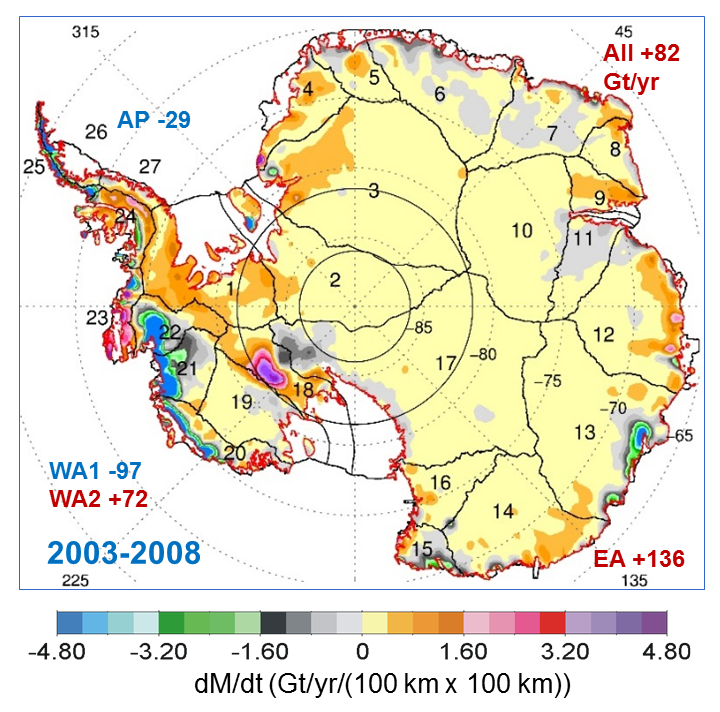 Scientists calculate how much the ice sheet is growing or shrinking from the changes in surface height that are measured by the satellite altimeters. In locations where the amount of new snowfall accumulating on an ice sheet is not equal to the ice flow downward and outward to the ocean, the surface height changes and the ice-sheet mass grows or shrinks.

But it might only take a few decades for Antarctica’s growth to reverse, according to Zwally. “If the losses of the Antarctic Peninsula and parts of West Antarctica continue to increase at the same rate they’ve been increasing for the last two decades, the losses will catch up with the long-term gain in East Antarctica in 20 or 30 years – I don’t think there will be enough snowfall increase to offset these losses.”

The principal processes affecting the mass balance and dynamics of the ice sheets are ice mass input from snowfall with losses from sublimation and drifting. Surface melting on the grounded ice of Antarctica is very small, and subject to refreezing in the firn. Interaction with the ocean occurs at the undersides of the floating ice shelves and glacier tongues, and consequent changes in thickness affect the rate of ice flow from the grounded ice. Image credit: Zwally et al.

The study analyzed changes in the surface height of the Antarctic ice sheet measured by radar altimeters on two European Space Agency European Remote Sensing (ERS) satellites, spanning from 1992 to 2001, and by the laser altimeter on NASA’s Ice, Cloud, and land Elevation Satellite (ICESat) from 2003 to 2008.

Zwally said that while other scientists have assumed that the gains in elevation seen in East Antarctica are due to recent increases in snow accumulation, his team used meteorological data beginning in 1979 to show that the snowfall in East Antarctica actually decreased by 11 billion tons per year during both the ERS and ICESat periods. They also used information on snow accumulation for tens of thousands of years, derived by other scientists from ice cores, to conclude that East Antarctica has been thickening for a very long time.

“At the end of the last Ice Age, the air became warmer and carried more moisture across the continent, doubling the amount of snow dropped on the ice sheet,” Zwally said.

The extra snowfall that began 10 000 years ago has been slowly accumulating on the ice sheet and compacting into solid ice over millennia, thickening the ice in East Antarctica and the interior of West Antarctica by an average of 1.7 cm (0.7 inches) per year. This small thickening, sustained over thousands of years and spread over the vast expanse of these sectors of Antarctica, corresponds to a very large gain of ice – enough to outweigh the losses from fast-flowing glaciers in other parts of the continent and reduce global sea level rise.