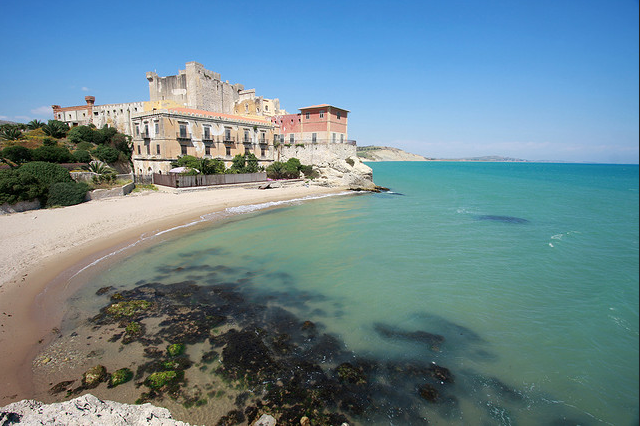 European scientists have simulated the impact of earthquake generated tsunamis across the Eastern Mediterranean area. The research showed how the tsunami waves could hit and flood coastal regions of southern Italy and Greece, which could help to identify the high risk areas and design a security defense system.

The Mediterranean region is not as well known for the tsunami occurrence as are the areas in the Pacific and Indian ocean, however they still happen on some occasions. Conditions favorable for tsunami developments in the basin develop when the African plate slides under the Eurasian plate. 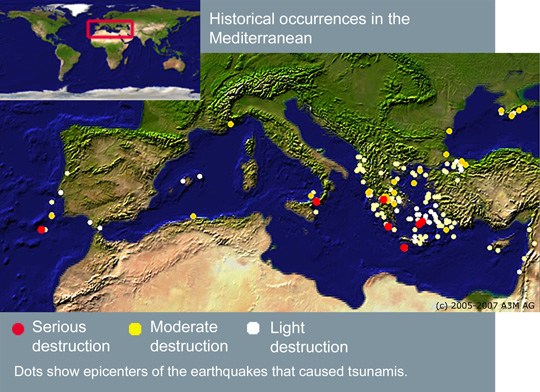 On a global scale, only about 10% of all the tsunamis happen in the Mediterranean, and a large tsunami event, on average, happens once in a century. However, such occurrence brings with it high risk level, as the Mediterranean is a relatively small basin, and a tsunami has to travel only a very short distance before reaching the coast. This is a significant disadvantage, as it leaves little to no time for security warnings and potential evacuations.

If looking at the history of the region, it can be noted that events of a significant magnitude have taken place. For example, a cluster of earthquakes hit the area off the coast of Crete in 365 AD, the largest of which had magnitudes between 8.0 and 8.5. The series of severe earthquakes generated a tsunami which devastated the ancient cities across Greece, Italy and Egypt. About 5 000 people were killed only in Alexandria on the occasion.

Another example dates back to a more recent 1908, when an earthquake of about 7.0 magnitude hit the Messina region in Italy. A generated tsunami was responsible for the deaths of thousands of people, and the witnesses reported 10 meter high waves.

About 130 million people inhabit the coastal regions of the Mediterranean today, which makes the risk even higher, and the area more vulnerable. The results of the study show the extent of flooding that might occur across parts of the southern Italy and Greece coast, if the areas were hit by a large tsunami. The research was published in the Ocean Science Journal on August 27, 2015. 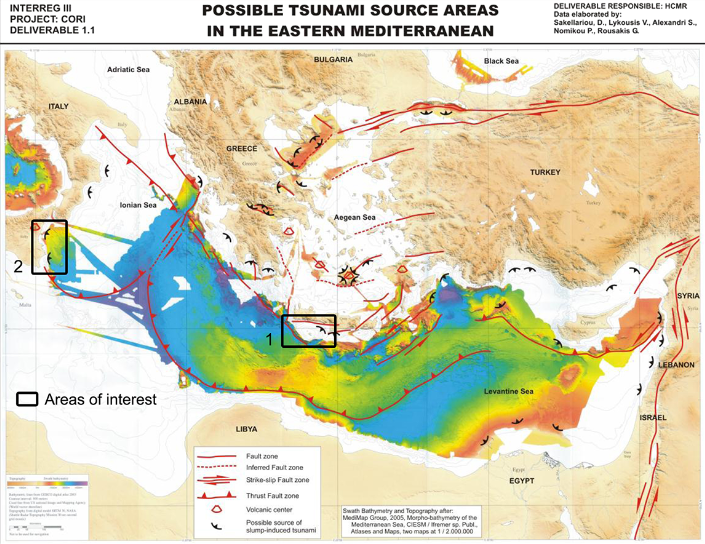 Possible tsunamigenic sources in the Eastern Mediterranean. Two black rectangles outline the areas of interes in the conducted study.

“The main gap in relevant knowledge in tsunami modeling is what happens when tsunami waves approach the nearshore and run inland. We wanted to find out how coastal areas would be affected by tsunamis in a region that is not only the most active in the Mediterranean in terms of seismicity and tectonic movements, but has also experienced numerous tsunami events in the past,” explained Achilleas Samaras, the lead author of the study and a researcher at the University of Bologna in Italy. 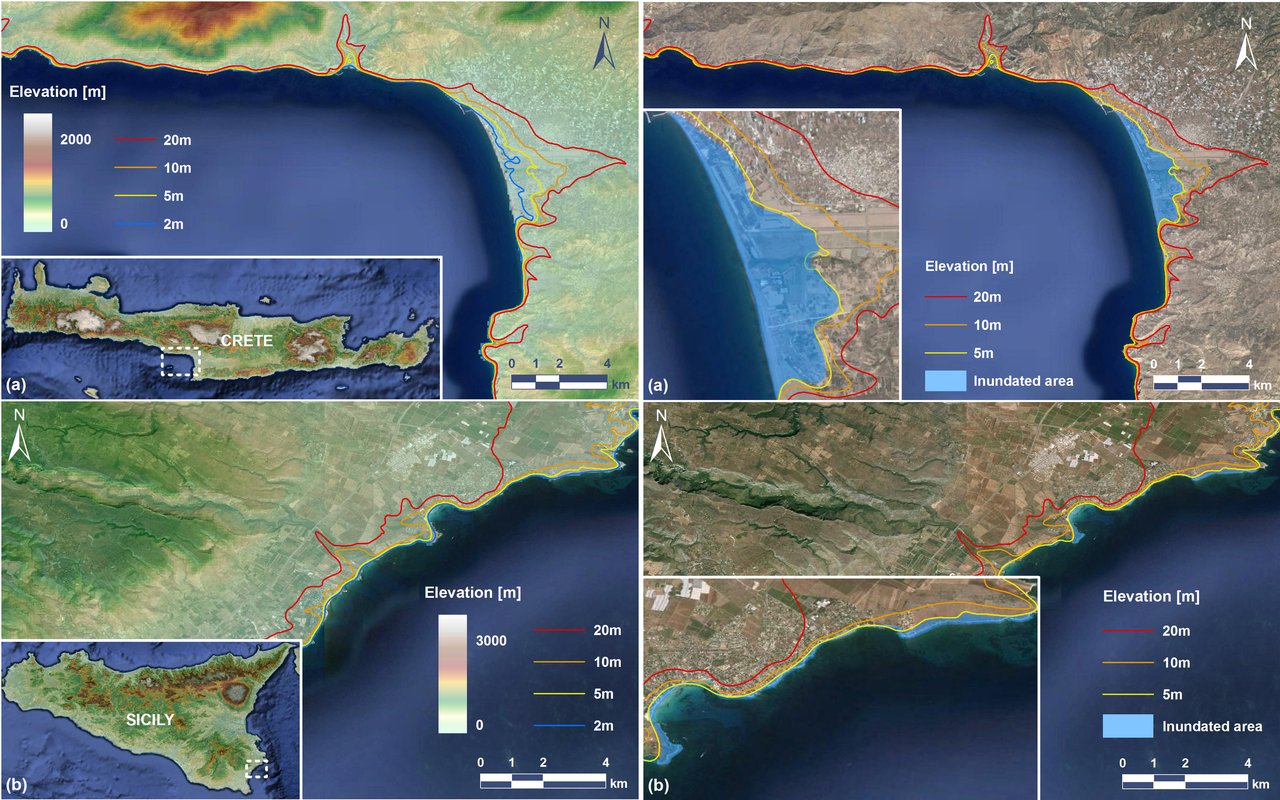 The left-hand side maps show the location and elevation of the low-lying coastal areas in south-southwest Crete (top) and in east-southeast Sicily (bottom). The ones on the right show the areas in these two locations that would be inundated in the earthquake-induced tsunami scenarios. Image credit: Samaras et al, Ocean Science, 2015.

The new computer model utilizes the seafloor depth, topography and shoreline to predict how the tsunamis form, propagate and hit the coast. For example, the team simulated the tsunamis that would be generated if the M7.0 earthquake happened off the coasts of eastern Sicily and southern Crete. 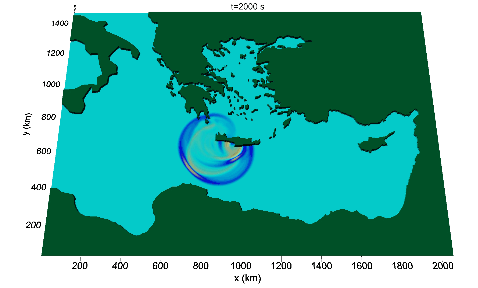 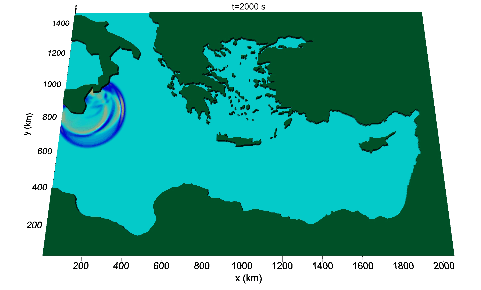 The results of the experiment show that the tsunami waves would overwhelm the low-lying parts of the coast with water rising up to 5 meters above sea level. The Crete would have been hit harder, as about 3.5 square kilometers of land would be inundated.

“We simulate tsunami generation by introducing earthquake-generated displacements at either the sea bed or the surface. The model then simulates how these disturbances – the tsunami waves – propagate and are transformed as they reach the nearshore and inundate coastal areas.”

“Due to the complexity of the studied phenomena, one should not arbitrarily extend the validity of the presented results by assuming that a tsunami with a magnitude at generation five times larger, for example, would result in an inundation area five times larger. It is reasonable, however, to consider such results as indicative of how different areas in each region would be affected by larger events,” Samaras warns.

The research teams believes their results could prove useful in creating a comprehensive database of possible tsunami scenarios in the Mediterranean, identifying the vulnerable coastal regions and planing an appropriate defense system.