Seabirds have a great impact on the marine ecosystems and are therefore well monitored. The changes in their population are good indicators of long-term and large scale changes in marine ecosystems. These populations are now heavily influenced by threats like entanglement in fishing gear, over fishing of food sources, climate change, pollution, disturbance, direct exploitation, development, energy production, and introduced species (predators such as rats and cats introduced to breeding islands that were historically free of land-based predators).

Analysis of global seabird population is limited to small spatial and temporal scales. The only global assessment of seabird population status, based on extinction risk as assessed by the IUCN Red List of Threatened Species, indicates that one third of seabird species are threatened with extinction, one half are known or suspected to be in decline, and at least four species are extinct

To estimate the overall global population trend from a large collection of time-series for different seabird populations, the researchers used multivariate autoregressive state-space (MARSS) modeling because it estimates population size based on time-series containing missing data, and estimates observation error (difference between actual and observed population size) and process error (year to year variability in population growth). MARSS models provide an estimate of the population size in the years when no survey was conducted. A MARSS model is described by the following equations, taken from Holmes et al 2012.

In the Eqs 1 and 2, x is a m*T matrix representing the state of the random variable Xt at each time t. The parameter w is a m*T matrix of the process errors at time t, with a mean 0 and covariance matrix Qt. Parameter y represents a n*T matrix of the observation, some of which may be missing. v is a n*T column vector of the non-process errors, the observation errors at tand multivariate and normal with mean 0, and covariance matrix Rt. u and a are parameters.

As each of the seabird populations was reproductively and often geographically isolated, the researchers assumed they had independent random errors (diagonal Q matrix) and had different population parameters (u and a). As the population census data were collected by different groups utilizing different techniques (even within the same population), and some species are easier to detect than others, the researchers stipulated independent observation variances for each population (diagonal and unequal R matrix). However, much of the variation in process error may be the result of environmental, rather than demographic stochasticity, meaning that populations may show similar trends and the assumption of independent process error is invalid. The researchers calculated the size of Q and R as a proportion of u and a.

9 920 records for 3 213 breeding populations were compiled. The number of records per population ranged from one to forty-nine and averaged three. The records were unevenly distributed throughout the decades and most numerous in the 1980s and 1990s. 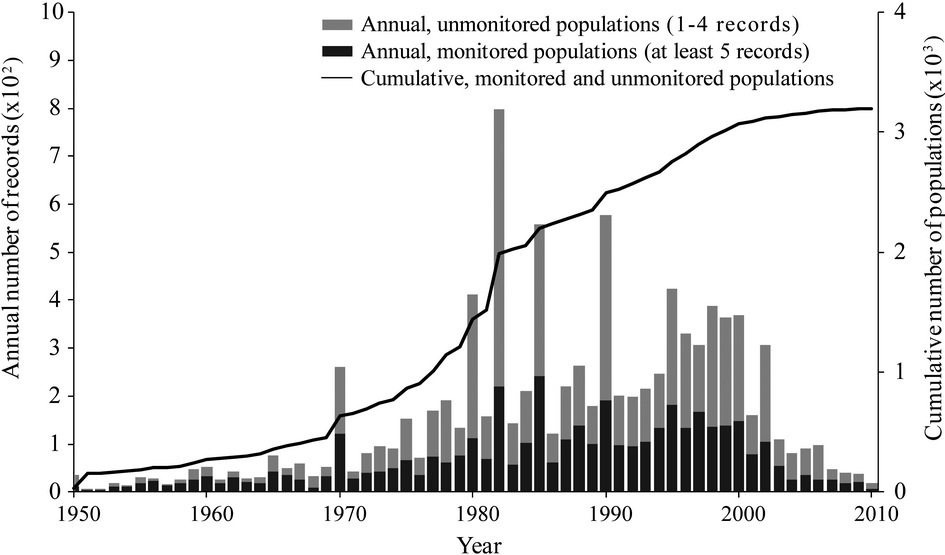 When Q and R matrices were set as diagonal and unequal (independent process and non-process errors used for each population), MARSS modeling revealed a substantial decline in seabird populations between 1950 and 2010. Compared to that in the year 1950, only 30% was left in the monitored portion of the seabird populations. On an average, each population lost a considerable number of individuals each year.

“We expected to find that seabird populations are declining, but we didn’t necessarily expect to find a decline of this magnitude,” says Michelle Paleczny, the lead author of the paper. “In order to secure a future for seabirds, it’s going to be very important for us to increase the emphasis on efforts to conserve them.”

A substantial proportion of the seabird loss was due to large declines in the five most abundant populations, all located in the southern hemisphere. Between them, the populations of Sooty Terns (Sternidae) from French Polynesia and South Orkney, the South Sandwich Island populations of both Soft-plumaged Petrels and Kerguelen Petrels (both Procellariidae), and the Peruvian population of Guanay Cormorants (Phalacrocoracidae) accounted for over 30% of the total numbers of seabirds in the sampled population in 1950; all of these populations were reduced to less than 5% of their initial size by 2010. The populations that were found to increase tended to be small coastal populations. 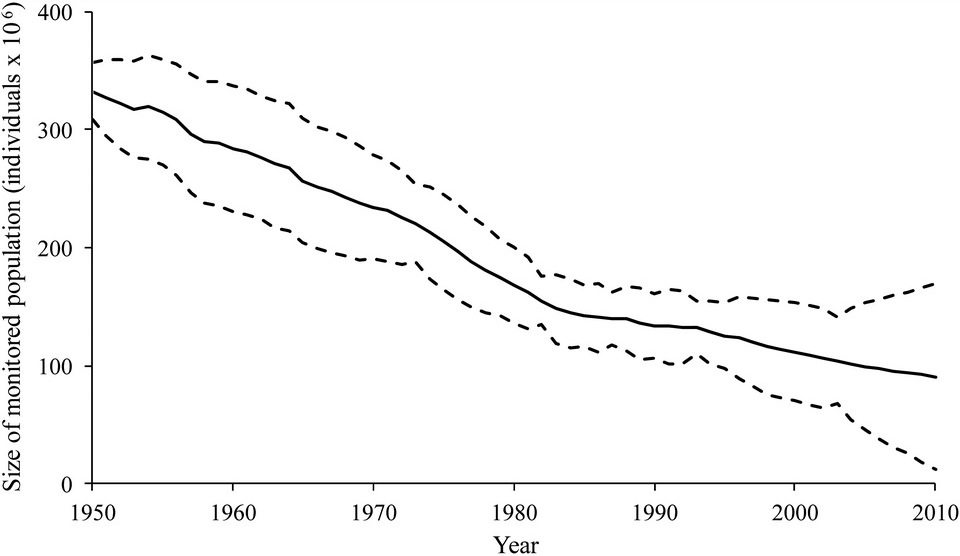 Because most of these threats pertain to seabirds all over the world, and because the study included such a variety of species, the researchers suspect that their findings are applicable to the entire global population.  Human activities have been continuously threatening the existence of seabird populations. No significant climatic oscillation was found to pose potential threats. In the end, it is high time we undertook conservation and restorative actions for seabird populations.