This year's Eta Aquarids, known for their speed, peak during the early morning hours of May 5 – 6. Traveling at about 66 km/s (148 000 mph) into Earth's atmosphere these meteors are leaving glowing trains (incandescent bits of debris in the wake of the meteor) which last for several seconds to minutes.

This is an above average shower, capable of producing up to 60 meteors per hour at its peak, which favors southern hemisphere observers. Sadly, the nearly full moon will be a big problem this year blocking out all but the brightest meteors.

In the northern hemisphere, the rate can reach about 10 to 30 meteors per hour, where they can be seen as "earthgrazers" – long meteors that appear to skip the surface of the Earth at the horizon.

The pieces of space debris that interact with our atmosphere to create the Eta Aquarids originate from comet 1P/Halley. Each time that Halley returns to the inner solar system its nucleus sheds a layer of ice and rock into space. The dust grains eventually become the Eta Aquarids in May and the Orionids in October if they collide with Earth's atmosphere. 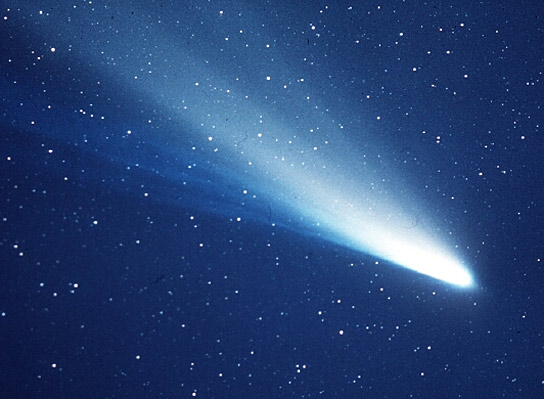 Comet Halley takes about 76 years to orbit the Sun once and the last time it was seen from the Earth was in 1986. It will not enter the inner solar system again until 2061. Its dimensions are 16x8x8 km and it is one of the darkest, or least reflective, objects in the solar system, with an albedo of 0.03.

Meteors will radiate from the constellation Aquarius, but can appear anywhere in the sky.