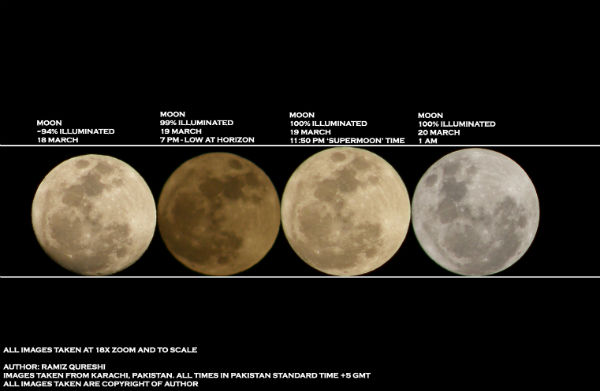 This weekend will provide the full Moon’s closest approach of the year to Earth. On Saturday, May 5, 2012 the Moon could appear as much as 14% bigger and 30% brighter than other full Moons of 2012, according to some calculations.

Every month, as the Moon circles the Earth in its elongated orbit, its distance from the Earth varies. This weekend, the Moon is reaching what’s known as its perigee, the closest point to Earth in its orbit. It will be about 356,953 kilometers (221,802 miles) from Earth on Saturday. Apogee — when the Moon is farthest away — varies, but is around 405,000 km (252,000 miles) away.

The last supermoon was in March 2011. At the time, it was the biggest and brightest full moon in 18 years.

But even better is that two weeks after the “supermoon” on May 5th, the Moon will be at apogee as it lines up in front of the Sun for an amazing annular eclipse on May 20th. An annular eclipse occurs when the Sun and Moon are exactly in line, but the apparent size of the Moon is smaller than that of the Sun. Hence the Sun appears as a very bright ring, or annulus, surrounding the outline of the Moon. (UniverseToday)

The “supermoon” may interfere with the peak of an annual meteor shower created by the leftovers from Halley’s comet. At the same time, the annual Eta Aquarid meteor shower will be hitting its peak, NASA scientists say. According to Bill Cooke of the Marshall Space Flight Center there is a small chance that the brightest fireballs from the meteor display may still be visible.

With May’s full moon timed with the moon’s perigee, it could appear 14 percent bigger and 30 percent brighter than other full moons of 2012, astronomer Tony Phillips explained in a NASA video. There is absolutely no chance the supermoon will threaten Earth.

NASA’s fireball cameras have already detected four bright ones. The 2012 Eta Aquarid meteor shower will peak at up to 60 meteors per hour on May 5. Meteor watchers in the Southern Hemisphere stand the best chance of seeing any meteors.

The eta Aquarid display is one of two meteor showers created by dust from Halley’s comet (the Orionid shower in October is the other). It occurs every April and May when the Earth passes through a stream of debris cast off by comet Halley during its 76-year trip around the sun. The eta Aquarid meteor shower of 2012 actually began on April 19 and ends on May 28, but its peak is in the overnight period between Saturday and Sunday (May 5 and 6).

Right now she’s headed towards Earth and the pinnacle of observing excitement – the Transit. It will continue to grow larger in apparent size and the crescent phase will narrow even more. On June 5 (June 6 in Australia and Asia), it will pass between the Earth and Sun… an event which only happens about twice and century and won’t happen again until the year 2117! Right now Venus is surrounded by a host of bright winter stars like Capella, Betelgeuse, Aldebaran and the Pleiades. 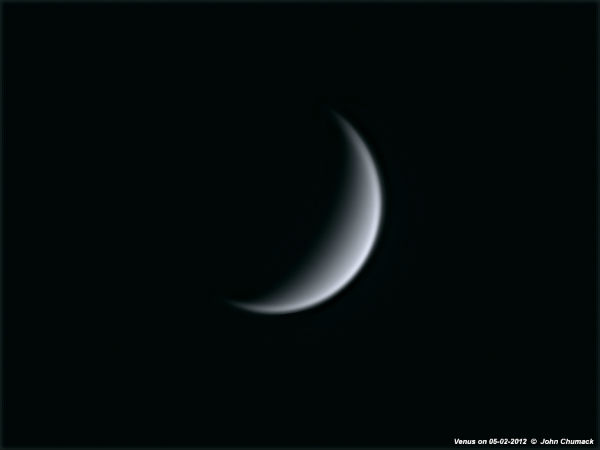 On May 20 the moon will cross in front of the sun as seen from Earth but won’t completely block the star. What scientists call an annular solar eclipse will be visible along a narrow track that stretches from East Asia (where it will be May 21) across the Pacific Ocean before crossing parts of the western United States.

An annular solar eclipse occurs when the moon is in its new phase but is too far from Earth to completely block the sun. Instead, it leaves a ring (or annulus) of the sun.

Venus and Mercury will shine together on May 31, with Mars and Saturn visible at night all month long.