The Eta Aquarid meteor shower will reach its maximum rate of activity this year on the night of May 5 and the morning of May 6. This is an above average shower, capable of producing up to 60 meteors per hour at its peak, with most of the activity seen in the southern hemisphere. In the northern hemisphere, the rate can reach about 30 meteors per hour.

The Moon will be 29 days old – new moon – at the time of peak activity, and so will present minimum interference. According to NASA, slightly higher rates are likely overnight May 4 – 5 than on May 5 – 6 but the shower's broad peak means that both nights will have meteors. Eta Aquarids run annually from April 19 to May 28.

Meteors produced by this shower are known for their speed. They travel at about 66 km/s (148 000 mph) leaving glowing "trains" (incandescent bits of debris in the wake of the meteor) which last for several seconds to minutes.

Eta Aquarids are produced by dust particles left behind by comet Halley, which has been known and observed since ancient times. Each time this comet returns to the inner Solar System its nucleus sheds its dust grains into space. When Earth passes through this stream of particles, the collide with Earth's atmosphere and become the Eta Aquarids in May and the Orionids in October if they collide with Earth's atmosphere.

It takes about 76 years for comet Halley to orbit the Sun once and the last time it was seen by casual observers was in 1986. The comet will not enter the inner Solar System again until 2061.

The point in the sky from which the Eta Aquarids appear to come from – the radiant – is the constellation Aquarius, the water bearer. One of the brightest stars within Aquarius is called Eta Aquarii, and these meteors appear from this area of the constellation.

However, the best place to look to see as many meteors as possible is not at the radiant itself, but at any dark patch of sky which is around 90° away from it, since it is at a distance of around 90° from the radiant that meteors will typically appear at their brightest. 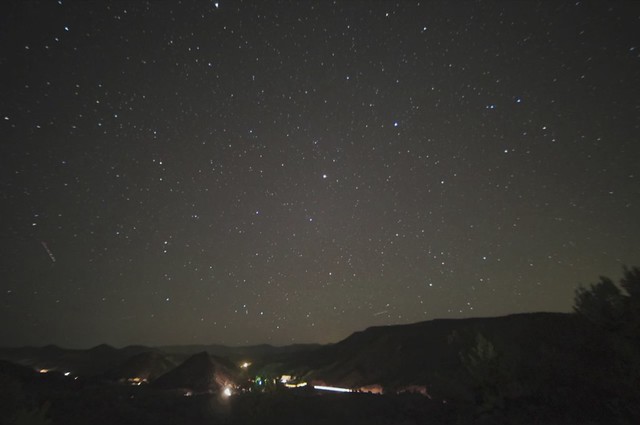