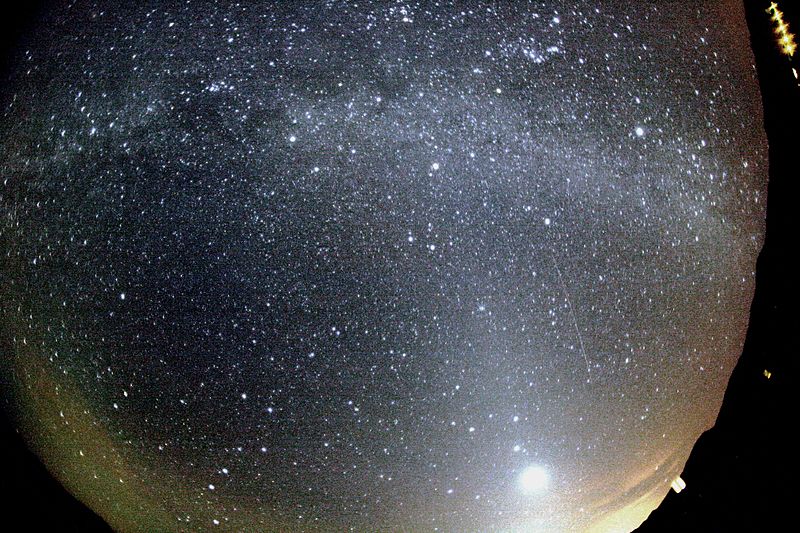 If you step outside before dawn during the next week or so, you might try to catch a view of some “cosmic litter” that has been left behind in space by Halley’s Comet: the Orionid meteor shower.

The Orionids can best be described as a junior version of the famous Perseid meteor shower. This year’s Orionids show is scheduled to reach its maximum before sunrise on the morning of Oct. 22. The meteors are known as “Orionids” because the fireballs seem to fan out from a region to the north of Orion’s second brightest star, ruddy Betelgeuse.

Currently, Orion appears ahead of us in our journey around the sun. The constellation does not completely rise above the eastern horizon until after 11 p.m. local daylight time. At its best, several hours later around 5 a.m., Orion will be highest in the sky toward the south.

The Orionids typically produce around 20 to 25 meteors per hour under a clear, dark sky. Orionid meteors are normally dim and not well seen from urban locations, so you’d do best to find a safe rural location to see the most Orionid activity.

Orionid meteors will begin to increase noticeably around Oct. 17, when they’ll start appearing at about five per hour. After peaking on the morning of Oct. 22, activity will begin to slowly descend, dropping back to around five per hour around Oct. 26. The last stragglers usually appear sometime in early to mid- November. 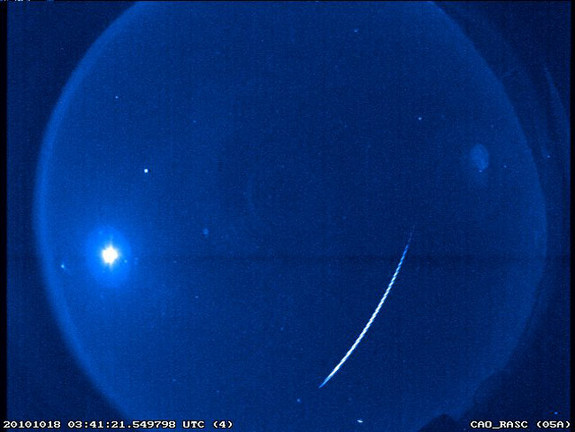 Halley’s Comet has left a visible legacy in the form of these two annual meteor showers, one of which is the Orionids. This will be a good year to look for them, since the moon will have slimmed down to a crescent on the morning of the Orionids peak, and will not pose much of a hindrance for those watching for Orionids in 2011. This slender moon will not rise until around 2 a.m. local daylight time.

Comets are the leftovers of the solar system’s creation, the odd bits and pieces of simple gases — methane, ammonia, carbon dioxide and water vapor — that went unused when the sun and its attendant planets came into their present form.  Meteoroids that are released into space out of this debris are the remnants of a comet’s nucleus. All comets eventually disintegrate into meteor swarms, and Halley’s is well into that process already.

These tiny particles — mostly ranging in size from dust to sand grains — remain along the original comet’s orbit, creating a “river of rubble” in space. In the case of Halley’s Comet, which has likely circled the sun many hundreds, if not thousands, of times, its dirty trail of debris has been distributed more or less uniformly all along its orbit.  When these tiny bits of comet collide with Earth, friction with our atmosphere raises them to white heat and produces the effect popularly referred to as “shooting stars.”

The orbit of Halley’s Comet closely approaches the Earth’s orbit at two places. One point is in the early part of May, producing a meteor display known as the Eta Aquarids. The other point comes in the middle to later part of October, producing the Orionids. 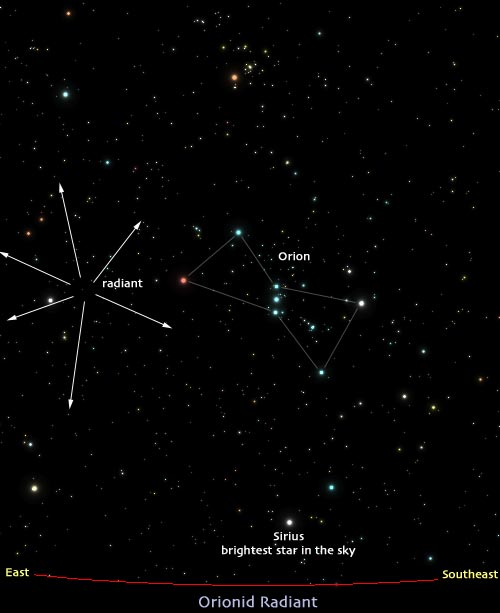 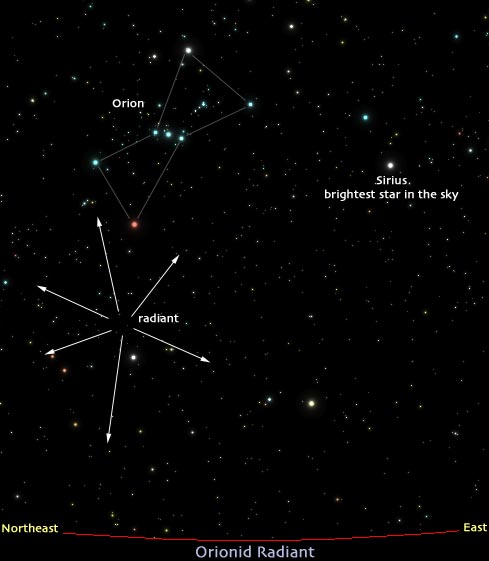 The best time to watch begins from 1 or 2 a.m. local daylight time, until around dawn, when the shower’s point of origin (in Orion’s upraised club, just north of the bright red star, Betelgeuse) is highest above the horizon. The higher this point, called the radiant, the more meteors appear all over the sky. The Orionids are one of just a handful of meteor showers that can be observed equally well from both the Northern and Southern hemispheres.

This meteor shower is one of the better annual displays, producing about 15 to 20 meteors per hour at its peak. Add the five to 10 sporadic meteors that always are plunging into our atmosphere and you get a maximum of about 20 to 30 meteors per hour for a dark sky location.  Most of these meteors are relatively faint, however, so any light pollution will cut the total way down.

The shower may be quite active for several days before or after its broad maximum, which may last from Oct. 20 through Oct. 24. Step outside before sunrise on any of these mornings, and if you catch sight of a meteor, there’s about a 75 percent chance that it likely originated from the nucleus of Halley’s Comet. At 66 kilometers (41 miles) per second, they appear as fast streaks, faster by a hair than their sisters, the Eta Aquarids of May. And like the Eta Aquarids, the brightest of family tend to leave long-lasting trains. Fireballs are possible three days after maximum.

Recent studies have shown that about half of all Orionids that are seen leave trails that lasted longer than other meteors of equal brightness. This is undoubtedly connected in some way to the makeup of Halley’s Comet. So it is that the shooting stars that we have come to call Orionids are really an encounter with the traces of a famous visitor from the depths of space and from the dawn of creation. (Space.com)

The discovery of the Orionid meteor shower should be credited to E. C. Herrick (Connecticut, USA). In 1839, he made the ambiguous statement that activity seemed to be present during October 8 to 15. A similar statement was made in 1840, when he commented that the “precise date of the greatest meteoric frequency in October is still less definitely known, but it will in all probability be found to occur between the 8th and 25th of the month.“

The first precise observation of this shower was made by A. S. Herschel on 1864 October 18, when fourteen meteors were found to radiate from the constellation of Orion. Herschel confirmed that a shower originated from Orion on 1865 October 20. Thereafter, interest in this stream increased very rapidly – with the Orionids becoming one of best observed annual showers.

The Orionids were frequently observed during the latter years of the 19th century and became the focus of debate during the first quarter of the 20th century. The British amateur astronomer W. F. Denning and the American astronomer C. P. Olivier began using the pages of two astronomical periodicals to debate whether the Orionid radiant, the point from which the meteors seemed to radiate in the sky, moved from one day to the next: Denning argued that it did not, while Olivier argued that it did. Each astronomer had supporters that chimed in, but the argument remained essentially theirs. The problem was that the Orionid radiant was more diffuse than the other well-observed annual meteor showers. Thanks to the use of photography and the very precise plotting of meteors by several amateur and professional astronomers, Oliver was eventually proven correct.

One very unusual feature the Orionids tend to display is an unpredictable maximum. In 1981, observers reported very low rates of less than 10 meteors per hour during the period of October 18 to 21 (maximum predicted for October 21), but high rates of near 20 per hour were noted on the morning of October 23. Interestingly, a study published in Czechoslovakia during 1982, revealed the Orionids generally exhibited a double maximum. The finding was based on observations made during the period spanning 1944 to 1950. Shortly thereafter, several visual studies indicated the presence of a “plateau effect” or a long period of maximum devoid of any sharp decline of activity, instead of a double peak. Most notably, the 1984 observations of the Western Australia Meteor Section, show a nearly flat maximum lasting from October 21 to 24, while N. W. McLeod, III (Florida, USA), has frequently noted it to stretch up to 6 days.

The variation in activity levels around the time of maximum has been attributed to the presence of filaments within the Orionid stream orbit. Each of these filaments represents a previous orbit that comet Halley has followed in the past. Since observations indicate that comet Halley has been around for over 2200 years and since the comet orbits the sun in about 76 years, there are quite a few filaments making up the Orionid stream. (MeteorShowersOnline)