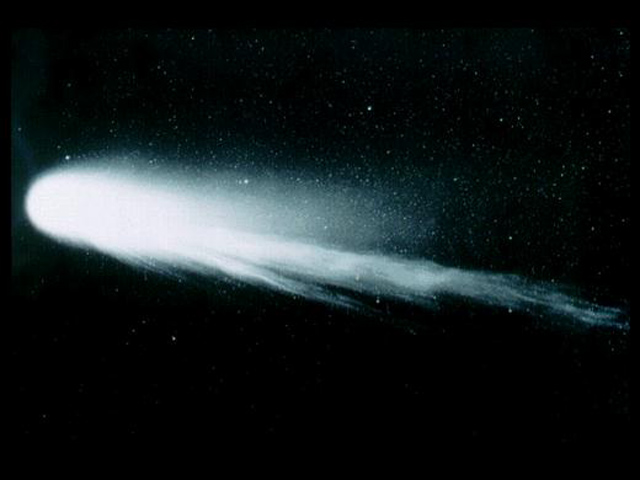 Get up in the wee hours of the morning May 6th and head out into the country, far from the city lights so you can observe eta Aquarid meteor shower. The eta Aquarids are best viewed from the southern hemisphere, but there's something special about them no matter where you live.

"Each eta Aquarid meteoroid is a piece of Halley's Comet doing a kamikaze death dive into the atmosphere," explains NASA astronomer Bill Cooke. "Many people have never seen this famous comet, but on the morning of May 6th they can watch bits of it leave fiery trails across the sky."

A messenger from the dawn of the universe, Halley's Comet orbits the sun once every 76 years. Each time it swings by the sun, intense solar heat vaporizes about 6 meters of ice and rock from the nucleus. The debris particles, about the size of sand grains, spread along the comet's orbit, filling it with tiny meteoroids.

"Although Halley's Comet is deep in the outer solar system at the moment and won't return to Earth until 2061, it treats us to a meteor shower twice a year as our planet passes by the debris cloud," says Cooke. "In May we have the eta Aquarids, and in October the Orionids."

And there is something especially significant about the 2011 eta Aquarids.This is your one chance this year to see meteors blaze across the sky without glaring moonlight dimming them. A thin crescent moon will vacate the sky in the early evening, leaving a dark canvas for the display. Early risers are in luck, as the best viewing is an hour or two before dawn. Lie down where you can see as wide an expanse of sky as possible to catch more meteors with your peripheral vision. Look up into the darkness and relax.

The radiant for the eta Aquarids is in the constellation Aquarius: diagram. But you don't need to look toward the radiant to see the meteors. But meteors can appear in any part of the sky. In fact, their trails will tend to point back toward the radiant, so if you look that way the meteor may appear somewhat stubby. They'll appear much longer going by you than coming at you.

You won't need binoculars or a telescope to observe eta Aquarid meteors. The naked eye's field of view is usually best for seeing meteors, which frequently streak more than 45 degrees across the sky. Eta Aquarids are fast, moving at 66 km/s (148,000 mph!), and often trace long paths across the sky, sometimes leaving glowing, persistent trains. In the northern hemisphere, depending on your latitude