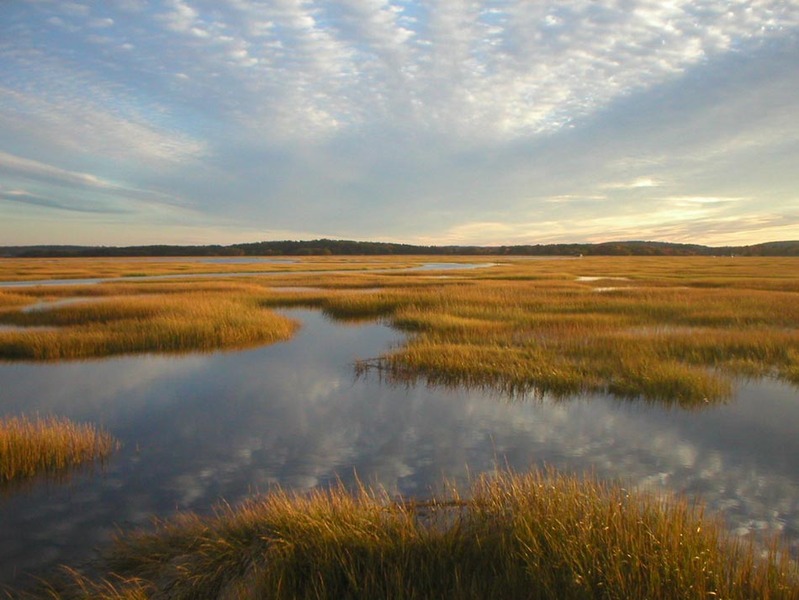 The salt marshes that rim the shores of Massachusetts’s Plum Island estuary, which provide nesting grounds for numerous waterfowl and extremely productive spawning grounds for striped bass and soft-shell clams, have grown by 300 hectares in the last 300 years. That growth, according to a new study, was fueled by post-colonial deforestation and the erosion it caused in areas upstream. The findings suggests that efforts to maintain or restore salt marshes along the Eastern Seaboard, which have begun to disappear in recent years for a variety of reasons, may be preventing the wetlands from returning to their more natural sizes.

In the past century, wetlands in many regions have shrunk dramatically. San Francisco Bay lost about 20,000 hectares of wetlands during that period, and the Mississippi River delta lost 20 times that amount. Scientists have long presumed that the ongoing loss of wetlands in many areas of the world stems from influences such as rising sea levels and human development of coastal real estate. In many regions, dams both large and small also contribute to wetland degradation by interrupting the flow of sediment to the sea, thereby depriving the marshes of material that could accumulate and help counteract local erosion.

But in some areas, the 20th-century shrinkage of wetlands may simply be a return toward normal coverage, argue Matthew Kirwan, a geomorphologist with the U.S. Geological Survey in Charlottesville, Virginia, and colleagues. They draw that conclusion from their study of the Plum Island estuary reported in the May issue of Geology. By carbon-dating peat samples taken in 2006 from more than a dozen places in those marshes, Kirwan and his colleagues found that 3 centuries ago the wetlands covered only about 2/3 their current area. Mainly during the 1700s and 1800s, the salt marshes expanded atop a temporary bounty of sediment delivered to the estuary’s shores as a result of human-induced erosion, the researchers contend. The area was first settled in the 1630s, and by 1700 at least three of the rivers flowing into the estuary powered sawmills and gristmills—evidence of the substantial deforestation and agricultural activity taking place in the watershed, Kirwan notes.

In general, the growth and subsequent death of marsh vegetation adds peat—and, therefore, erosion-stifling elevation—to wetlands. So even in today’s environment, in which sediment flowing to the sea has been reduced by dams, marshes can grow and flourish despite slowly rising sea levels, the team’s simulations show. This finding, says Kirwan, raises the possibility that many of the salt marshes fringing the Eastern Seaboard grew on top of deposits of sediment that resulted from changes in land use during the 19th century. In that case, the researchers argue, the marshes are unnaturally large, so their retreat in many places is merely a return to a more normal size.

“The role that humans played in creating such salt marshes is an interesting question,” says Charles Hopkinson, a coastal biogeochemist at the University of Georgia in Athens. More than 60 centimeters of topsoil has been lost from the Piedmont in Georgia, North Carolina, and South Carolina since the area was settled, he notes. “We really don’t have a good understanding of where that sediment went,” he adds. Nevertheless, he suggests that restoring sediment flow to shrinking marshes could aid in their restoration, or at least help them maintain their current size.

In addition to federal regulations that protect wetlands, a number of states and localities have enacted laws and ordinances that regulate development or other activities in such places. But the new study raises a question: Should coastal managers seek to maintain the marshes in their current, unnaturally large, extent, or should they leave nature to run its course? That’s a tricky issue because such wetlands are biological hotspots and provide valuable ecosystem services such as filtering nutrient-rich runoff from shore and serving as a buffer zone against storm surges. Moreover, by some estimates, as much as 50% of the wetlands acreage along the Eastern Seaboard has already been lost in recent decades, with some wetlands shrinking due to natural causes such as sea level rise but many others falling victim to human development.

In the end, the choice to preserve or let shrink an artificially large salt marsh is a value judgment, says James Syvitski, a hydrologist at the University of Colorado, Boulder. “I don’t think people would like to go back to what was there before. They like what they have today,” he says of the marshes. “People have grown to appreciate them, even though some of them shouldn’t exist.” (ScienceMag)