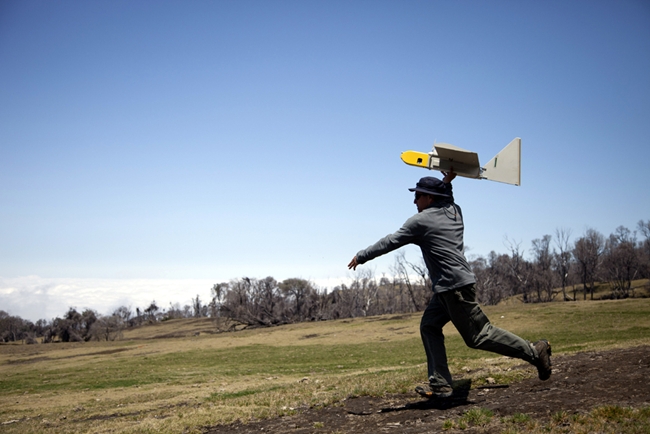 To improve understanding of volcanoes, researchers need to gather data about volcanic ash and gases. However, volcanic airspace contains noxious gases that can be dangerous for researchers as well as conventional combustion engines. Considering the nature and magnitude of risk, unmanned areal vehicles (UAVs) having electric engines that ingest little contaminated air, are ideal for such surveys. Last month a team of researchers from NASA used three re-purposed military UAVs equipped with special instruments to study the noxious sulfur dioxide plume of Costa Rica's active Turrialba volcano, near San Jose.

Between March 11 and 14, the research team lad by David Pieri of JPL, launched 10 flights of the remote-controlled UAVs into the volcanic plume and above the rim of Turrialba's 10,500-foot (3,200-meter) summit crater. During the flights, the team coordinated its data gathering with NASA's Advanced Spaceborne Thermal Emission and Reflection Radiometer (ASTER) instrument on NASA's Terra spacecraft, allowing scientists to compare sulfur dioxide concentration measurements from the satellite with measurements taken from within the plume. Pieri said,

"It is very difficult to gather data from within volcanic eruption columns and plumes because updraft wind speeds are very high and high ash concentrations can quickly destroy aircraft engines. Such flight environments can be very dangerous to manned aircraft. Volcanic eruption plumes may stretch for miles from a summit vent, and detached ash clouds can drift hundreds to thousands of miles from an eruption site." 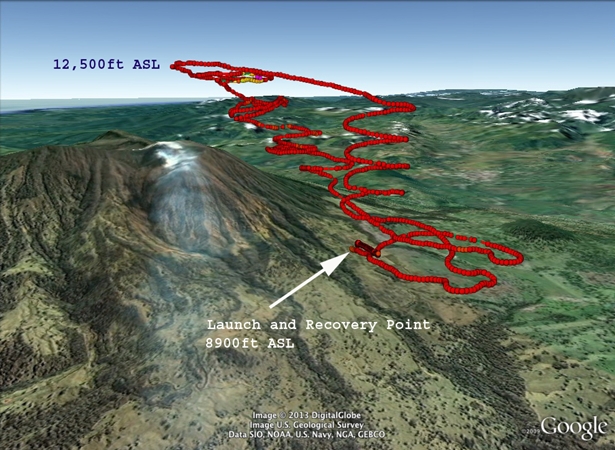 Launch and recovery points of flights into the volcanic plume and along the rim of the Turrialba summit crater approx. 10,500 feet above sea level. Image credit: NASA/ Matthew Fladeland

Researchers at NASA's Ames Research Center, Moffett Field, Calif. acquired these small, twin electric engine Dragon Eye UAVs from the United States Marine Corps.  Weight of the aircraft is less than six pounds (2.2 kilograms) each and it has a wingspan of 3.75 feet (1.1 meters). It has visible and infrared video cameras and can carry a one-pound instrument payload for up to an hour within a volcanic plume. The researchers equipped them with sulfur dioxide and particle sensors and automatic atmospheric sampling bottles keyed to measure sulfur dioxide concentration. 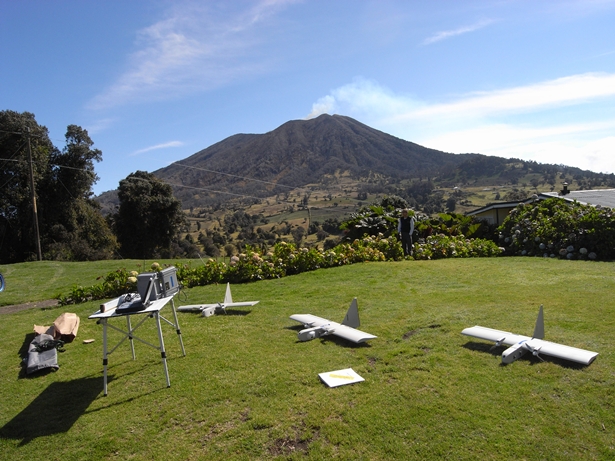 The project was aimed at improving the remote-sensing capability of satellites, including satellite data research products such as maps of the concentration and distribution of volcanic gases. Additionally, it was designed to improve computer models of how and where volcanic plumes will travel. Computer models derived from this study are believed to have contribution in safeguarding the National and International Airspace System. These computer models will also improve global climate predictions and mitigate environmental hazards (e.g., sulfur dioxide volcanic smog, or "vog") for people who live near volcanoes.

Such models help scientists study intensity and character of the volcanic activity located near the eruption vent. Knowing the height of ash and gas concentrations, and temperatures over the vent during an eruption are important initial factors for any model that predicts the direction of the volcanic plume. The project supports NASA's ASTER mission as well as JPL's planned Hyperspectral Infrared Imager (HyspIRI) satellite mission by improving satellite data-based retrievals of gases and solid aerosols associated with volcanic activity, as well as volcanic emission transport models. HyspIRI will study the world's ecosystems and provide critical information on natural disasters such as volcanoes, assessing their pre-eruptive behavior and the likelihood of future eruptions.