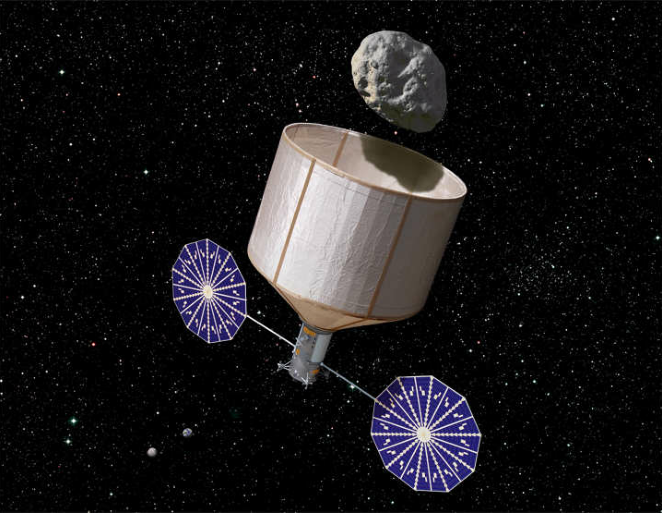 We have seen wonders of NASA in past; Curiosity rover‘s rendezvous for instance, was really a thrilling experience not only for NASA; but for science enthusiasts all over the world. Sources say NASA is now considering a plan for an “Asteroid return mission” to drag a Near Earth Asteroid (NEA) of about 7-m diameter into high lunar orbit using robotic spacecraft by mid-2020’s.

You may ask, is moving an asteroid even feasible? Well, a study report sponsored by Keck Institute for Space Studies (KISS) suggests “It is a huge idea, but not an impossible one” while admitting no celestial object has ever been moved by humans. In fact, JPL has already studied “possible feasibility to move a small asteroid, with a mass of ~10,000 kg, deep into the Earth’s gravity well – even to the orbit of the International Space Station”, report says. Expected cost of asteroid return mission will be $2.6 billion, slightly more than Curiosity rover’s mission cost.

Plan is to launch a robotic spacecraft into a 407 km low earth circular orbit (LEO) on an Atlas V 551 rocket, from where it will spiral out into lunar orbit using series of Lunar gravity assist (LGAs). In combination to LGAs, spacecraft will use Solar electric propulsion (SEP) to thrust itself out of the Earth-Moon system. This is supposed to complete in 2.2 years, whereafter spacecraft will embark on a 1.7 year journey toward asteroid. Theoretically, asteroid operations should take 90 days when spacecraft will study the asteroid, deploy a capture bag, perform capturing and un-tumble the asteroid. Thereafter it shall tow the asteroid to lunar orbit and release it there. Mission’s total duration is expected to be between 6 to 10 years. 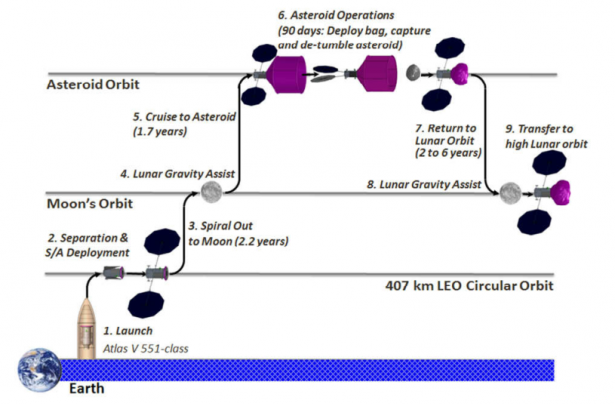 Talking about safety of the mission, report suggests putting asteroid in a “safe orbit” so that if it deviates, it won’t inflict damage on Earth’s surface. Moreover, researchers have suggested to target a type-C asteroid, so as to minimize the risk factor because of its size in case of such incident.

Such a mission will pave the path to better understanding of asteroids – scientific investigation, evaluation of their resource potential, determination of their internal structure. It will also be useful for betterment of planetary defense policies and hopefully serve as a possible test site for human operations at an asteroid.