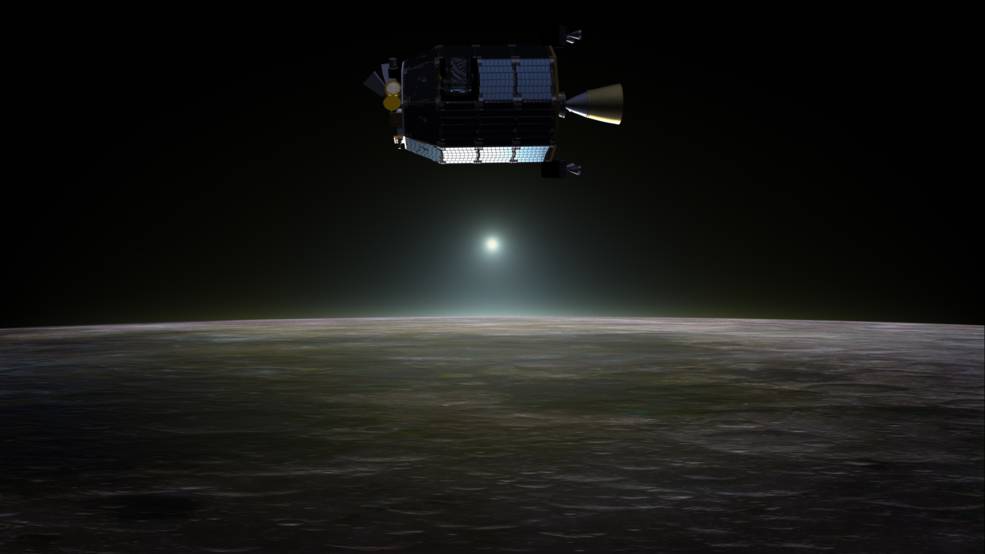 Lunar Atmosphere and Dust Environment Explorer (LADEE) spacecraft for the first time confirmed the long-speculated assumption, the Moon's atmosphere might contain neon, a gas known for it's intense glow, and commonly used in electric signs on Earth, NASA reported on August 17, 2015.

LADEE was launched in September 2013 from NASA's Wallops Flight Facility in Virgina. It began orbiting the Moon on October 6, 2013 and gathering data on November 10, 2013. The spacecraft ran out of fuel and impacted the Moon on April 17, 2014.

"The presence of neon in the exosphere of the Moon has been a subject of speculation since the Apollo missions, but no credible detections were made," said Mehdi Benna of NASA's Goddard Space Flight Center in Greenbelt, Maryland and the University of Maryland, Baltimore County. "We were very pleased to not only finally confirm its presence, but to show that it is relatively abundant."

Exospheres are the most common type of atmospheres in our Solar System, which is why their understanding is so important. Due to the Moon's atmosphere little thickness, the rocket exhaust and outgassing from spacecraft could easily affect it's composition. "It's critical to learn about the lunar exosphere before sustained human exploration substantially alters it," Benna said.

Moon's exosphere is built of a thin stream of electrically conducting gas blown from the surface of the Sun into space, the so-called solar wind. Most of it's constituents are hydrogen and helium, however, traces of other elements, including neon, can be found. Only helium, neon and argon are easily returned back to space, while the rest of the chemical elements will stick to the surface of the Moon.

The LADEE NMS spacecraft instruments have confirmed the Moon's exosphere consists mainly of helium, argon and neon. Argon peaks at sunrise, with neon at 4 a.m. and helium at 1 a.m. Although, the lunar exosphere is mainly built out of particles brought by solar wind, the instrument showed some gas on it's surface comes from lunar rocks.

For example, Argon-40 results from the decay of naturally occurring radioactive potassium-40. These chemical elements are leftover from the formation of the planets, and can, therefore, be found in rocks of all the terrestrial planets.

"We were also surprised to find that argon-40 creates a local bulge above an unusual part of the Moon's surface, the region containing Mare Imbrium and Oceanus Procellarum," said Benna. "One could not help to notice that this region happens to be the place where potassium-40 is most abundant on the surface. So there may be a connection between the atmospheric argon, the surface potassium and deep interior sources."

Another surprise was that the overall amount of argon in the Moon's exosphere was not constant in time. It increased and decreased by around 25% during the LADEE mission. This could be a result of enhanced outgassing from the surface, triggered by tidal stress on the Moon.

The mission also uncovered an unexpected source of the helium in the lunar exosphere. "About 20 percent of the helium is coming from the Moon itself, most likely as the result from the decay of radioactive thorium and uranium, also found in lunar rocks," added Benna.

"The data collected by the NMS addresses the long-standing questions related to the sources and sinks of exospheric helium and argon that have remained unanswered for four decades," explained Benna. "These discoveries highlight the limitations of current exospheric models, and the need for more sophisticated ones in the future."

Sources: NASA, The Abstract of the paper – Geophysical Research Letters