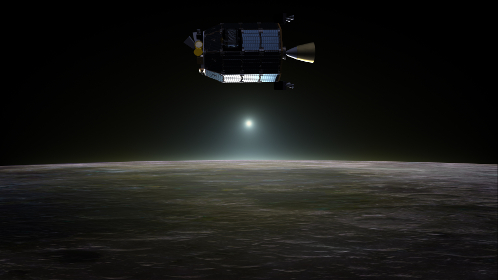 NASA scientists have discovered new properties of the Moon's exosphere – a thin layer of gas surrounding the Moon that's about 25-trillionth the density of Earth’s atmosphere. Their data reveals that meteoroids cause an increase in two key elements in Moon's exosphere.

Processes like meteoroid impacts, the bombardment of helium and hydrogen particles, thermal absorption and space weathering modify Moon's surface as all these processes work within lunar exosphere. NASA's Lunar Atmosphere and Dust Environment Explorer (LADEE) observed an increase in gases when meteoroids impact with the Moon. These solid grains of the Universe hit the lunar surface at the speed of at least 34 km (21 miles) per second. The impact releases the great amount of heat, vaporizing part of the soil and meteoroids.

Within the vapor are sodium and potassium gases, which are two of the key elements in lunar exosphere. LADEE's Ultraviolet Visible Spectrometer (UVS) measured both of the element levels around the moon twice a day (after every 12 hours) for five months. Measurements showed that sodium and potassium levels are higher in the lunar exosphere when meteors bombarded the Moon. Furthermore, it was also discovered that gases returned to their normal levels at a different pace. Potassium returned to its pre-shower state within days, but it took several months for sodium to return its normal level.

These findings will be presented at this week's meeting of the American Geophysical Union (ANU) in San Francisco and appear in the journal "Science". Observations will be incorporated by researchers into exosphere models of the moon, helping NASA to unravel other mysteries of our solar system origin and the changes over time.

"To understand the moon's exosphere requires insight into the processes controlling it, including the interaction of meteoroid showers as well as solar wind bombardment and ultraviolet radiation of the surface," said Anthony Colaprete, a researcher at NASA's Ames Research Center. "Understanding how these processes modify the exosphere allows researchers to infer its original state. Since these processes are ubiquitous across the solar system, knowledge gained by examining the moon's exosphere can be applied to a range of other bodies, granting us greater insight into their evolution through time."

Most of the bodies discovered in the solar system are considered "airless", having the only exosphere instead of dense atmospheres. Icy moons, Earth's moon, planet Mercury, asteroids and Pluto are greatest examples of bodies or planets, where exosphere starts from the surface. Larger bodies, including Earth, also have exospheres as the outermost layer of the atmosphere.

"These observations enable us to constrain the physical processes that contribute to the lunar exosphere," said Menelaos Sarantos of NASA's Goddard Spaceflight Center. "We're using these findings to build new exosphere models of how the space environments interacts with the surfaces of airless bodies, which we can use to better predict the processes and behaviors around similar bodies."

LADEE launched in September 2013 and first orbited around the moon about six months. The mission had the target of gathering information about lunar exosphere, conditions near the surface and environmental influences on lunar dust.