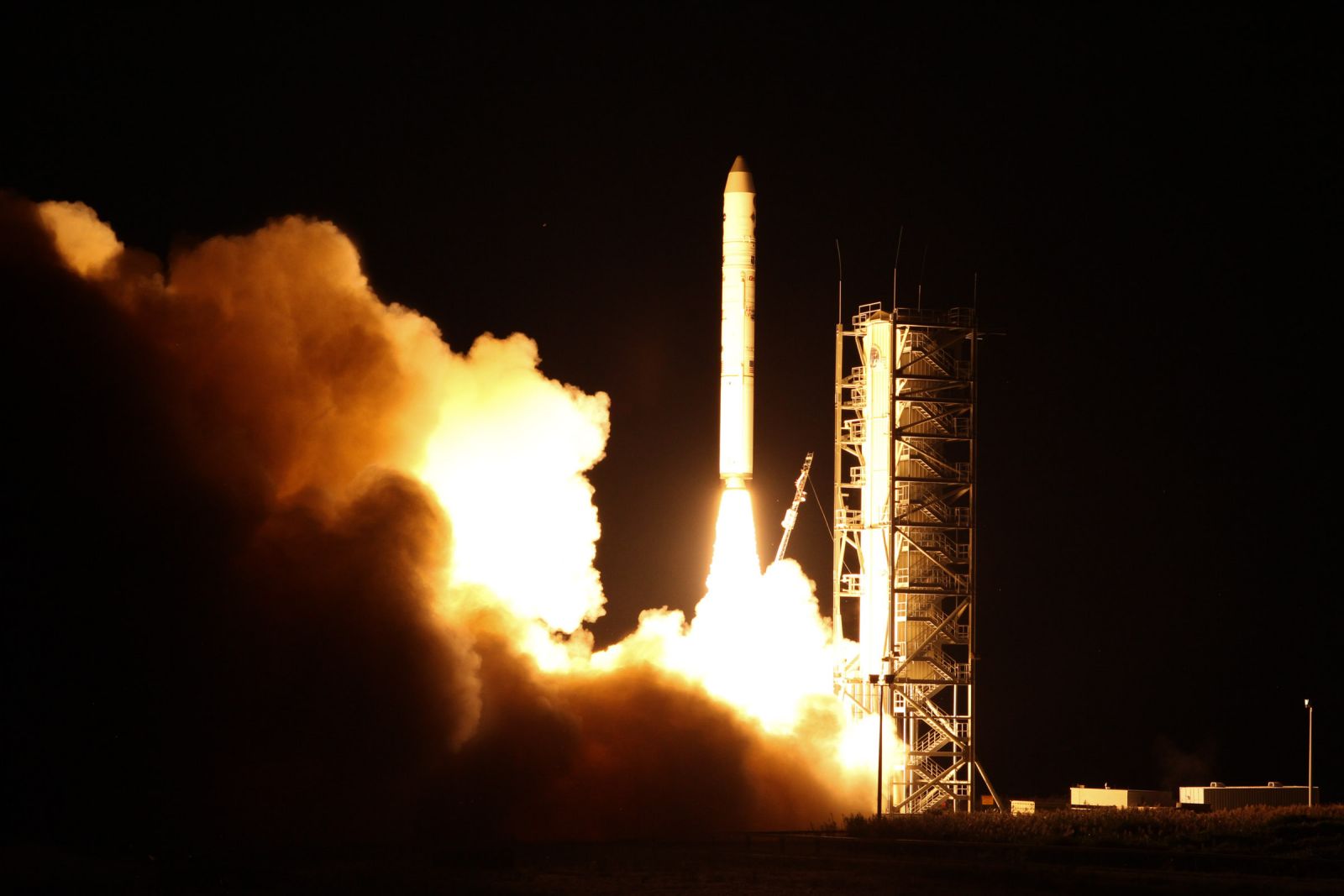 NASA's Lunar Atmosphere and Dust Environment Explorer (LADEE) was successfully launched on September 6, 2013 and has separated from its ride into space, powered up and is communicating with ground controllers. It is now on its way to arrive at the Moon in 30 days, after which it will enter the lunar orbit.

According to the LADEE mission operations team at NASA's Ames Research Center, during technical checkouts the LADEE spacecraft commanded itself to shut down the reaction wheels used to position and stabilize the spacecraft.

"The LADEE spacecraft is working as it was designed to under these conditions – there's no indication of anything wrong with the reaction wheels or spacecraft," said S. Pete Worden, Ames center director. "The LADEE spacecraft is communicating and is very robust. The mission team has ample time to resolve this issue before the spacecraft reaches lunar orbit. We don't have to do anything in a rush."

LADEE team members are currently analyzing the situation. Normal checkout takes a couple of days, and this anomaly may add a couple more days to the process.

"This is not an unusual event in spacecraft," Worden said. "We plan in the next few days to complete spacecraft checkout."

LADEE is a robotic mission that will orbit the Moon to gather detailed information about the lunar atmosphere, conditions near the surface and environmental influences on lunar dust. A thorough understanding of these characteristics will address long-standing unknowns, and help scientists understand other planetary bodies as well. 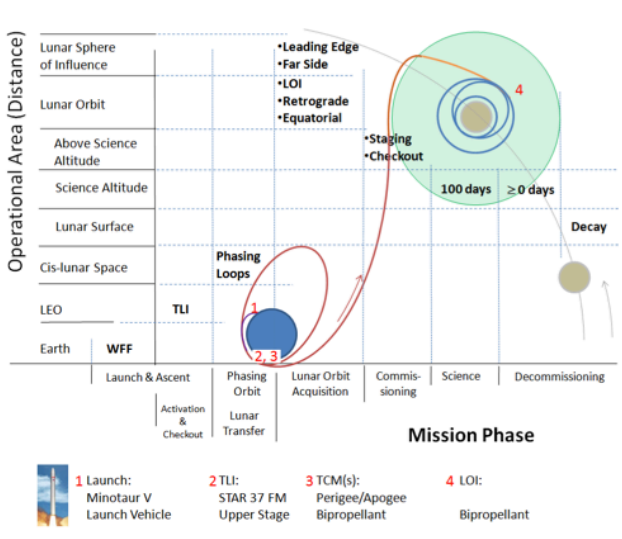 This figure shows a timeline of the LADEE mission phases from launch through the various mission phases.
Since the relative position of Earth and the Moon change over this entire period, it is simplest to illustrate the
events relative to the sun, or heliocentric view.

The spacecraft will approach the Moon from its leading edge, travel behind the Moon out of sight of the Earth, and then re-emerge and execute a three-minute Lunar Orbit Insertion maneuver. This will place LADEE in an elliptical retrograde equatorial orbit with an orbital period of approximately 24 hours.

A series of maneuvers is then performed to reduce the orbit to become nearly circular with a 156-mile (250-kilometer) altitude.

During the first 30 days, high altitude commissioning activities, such as the LLCD technology demonstration (Lunar Laser Communication Demonstration), prime operational phase and activation and basic checkout of the science payloads will be completed. The main goal of LLCD is proving fundamental concepts of laser communications and transferring data at a rate of 622 megabits per second (Mbps), which is about five times the current state-of-the-art from lunar distances.

LLCD will be NASA's first-step in creating a high performance space-based laser communications system. The LLCD mission consists of space-based and ground-based components. The Lunar Laser Space Terminal (LLST) is an optical communications test payload to fly aboard the LADEE Spacecraft and it will demonstrate laser communications from lunar orbit.The ground segment consists of three ground terminals that will perform high-rate communication with the LLST aboard LADEE. The primary ground terminal, the Lunar Laser Ground Terminal (LLGT) is located in White Sands, NM and was developed by MIT/Lincoln Laboratory and NASA. The ground segment also includes two secondary terminals located at NASA/JPL's Table Mountain Facility in California and the European Space Agency's El Teide Observatory in Tenerife, Spain. The main goal of LLCD is proving fundamental concepts of laser communications and transferring data at a rate of 622 megabits per second (Mbps), which is about five times the current state-of-the-art from lunar distances. Engineers expect future space missions to benefit greatly from the use of laser communications technology.

LLCD requires LADEE to very precisely maintain its pointing at the Lunar Laser Ground Terminal. In between successive orbits of Lunar Laser Space Terminal observations, the spacecraft will be oriented for best power production and thermal stability.

During the last 10 days of the commissioning period, LADEE's onboard propulsion subsystem will lower the observatory's altitude to 46.6 miles (75 km) while science payload checkout activities continue, and the first measurements of the lunar exosphere and dust properties will be performed. The commissioning phase will end when LADEE is maneuvered into a science orbit.

Due to the unevenness of the Moon’s gravitational field, the 50 x 50 km orbit requires significant orbit maintenance activity with maneuvers taking place as often as every 3-5 days or as infrequently as once every two weeks. Orbit Maintenance Maneuvers will be used to keep LADEE's lowest altitude above 31 miles (50 kilometers) and highest altitude below 93 miles (150 kilometers) to the extent possible. Orbital Maintenance Maneuvers are designed to maintain the altitude over the lunar sunrise terminator whenever possible.

The science orbit is designed to satisfy the basic science requirements of the LADEE mission, which are for a low-altitude, nearcircular, equatorial orbit. The primary design parameter from a science perspective is the orbit altitude, since sensitivity to the lunar atmosphere is driven by orbit altitude (i.e. the lower the altitude, the more sensitive the science measurements). Limits on the minimum orbit altitude are driven primarily by orbit lifetime considerations.

During the 100-day Science Phase, the Moon will rotate more than three times underneath the LADEE orbit. The LADEE spacecraft and payload instruments are designed to orbit the Moon in an upright posture; that is, with the longitudinal spin axis pointing north. This upright cruise attitude is intended to place the antenna in the best location for communication with Earth, and will allow exposure to the sun similar to power and thermal conditions in lunar orbit.

Following the Science Phase, a decommissioning period is planned, during which the altitude will be managed down to lower altitudes, after which the spacecraft will impact the lunar surface. 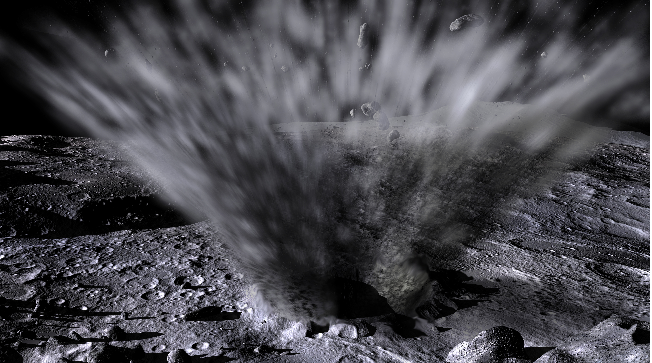