NASA scientists are developing a trailblazing, long-term technology demonstration of what could become the high-speed internet of the sky. The Laser Communications Relay Demonstration (LCRD) will help NASA understand the best ways to operate laser communications systems. They could enable much higher data rates for connections between spacecraft and Earth, such as scientific data downlink and astronaut communications. Launch is scheduled to occur in summer 2019.

"LCRD is the next step in implementing NASA’s vision of using optical communications for both near-Earth and deep space missions," said Steve Jurczyk, associate administrator of NASA’s Space Technology Mission Directorate, which leads the LCRD project. "This technology has the potential to revolutionize space communications, and we are excited to partner with the Human Exploration and Operations Mission Directorate’s Space Communications and Navigation program office, MIT Lincoln Labs and the U.S. Air Force on this effort."

"LCRD is designed to operate for many years and will allow NASA to learn how to optimally use this disruptive new technology," said Don Cornwell, director of the  Advanced Communication and Navigation division of the Space Communications and Navigation program office at NASA Headquarters, which leads the development of the instrument.

"We are also designing a laser terminal for the International Space Station that will use LCRD to relay data from the station to the ground at gigabit-per-second data rates. We plan to fly this new terminal in 2021, and once tested, we hope that many other Earth-orbiting NASA missions will also fly copies of it to relay their data through LCRD to the ground," he said.

The mission builds upon the Lunar Laser Communications Demonstration (LLCD), a very successful pathfinder mission that flew aboard the Lunar Atmosphere Dust and Environment Explorer in 2013. While LLCD was first to demonstrate high-data-rate laser communications beyond low-Earth orbit, LCRD will demonstrate the technology’s operational longevity and reliability. The mission will also test LCRD’s capabilities within many different environmental conditions and operational scenarios.

"We’ve learned a lot over the years about radio-frequency communications and how it works to make the most of the technology," Dave Israel, LCRD’s principal investigator, said about the current communications system. "With LCRD, we’ll have the opportunity to put laser communications through its paces to test the performance over different weather conditions and times of day to get that experience."

LCRD is designed to function between two and five years. Two ground terminals equipped with laser modems located in Table Mountain, California, and in Hawaii will demonstrate communications capability to and from LCRD, which will be located in an orbit that matches Earth's rotation, called a geosynchronous orbit, between the two stations. 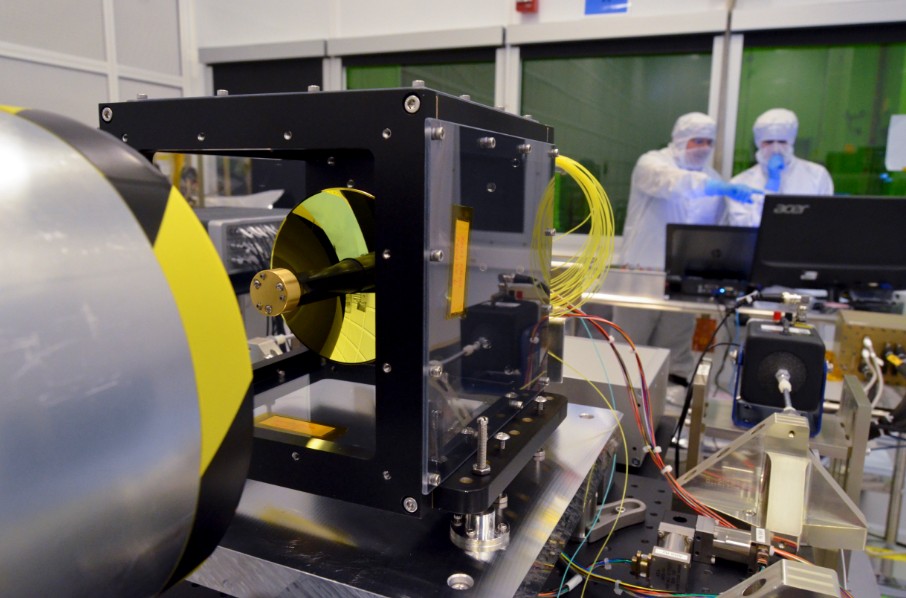 An engineer examines the gimbal and latch assembly component of one of LCRD’s two optical module assembly. The optical module, when combined with the modems and controller electronics, make up the LCRD’s flight payload. Credits: NASA's Goddard Space Flight Center/Sandra Vilevac

The modems translate digital data into laser or radio-frequency signals and back again. Once they convert the data to laser light, the optical module will beam the data to Earth. To do so, the module must be perfectly pointed to receive and transmit the data. The controller electronics (CE) module commands actuators to help point and steady the telescope despite any movement or vibration on the spacecraft.

LCRD recently successfully passed a key decision point review and has moved on to the integration and test stage of development, during which engineers will ensure each component will behave as intended after the instrument launches. Launch is scheduled to occur in summer 2019.