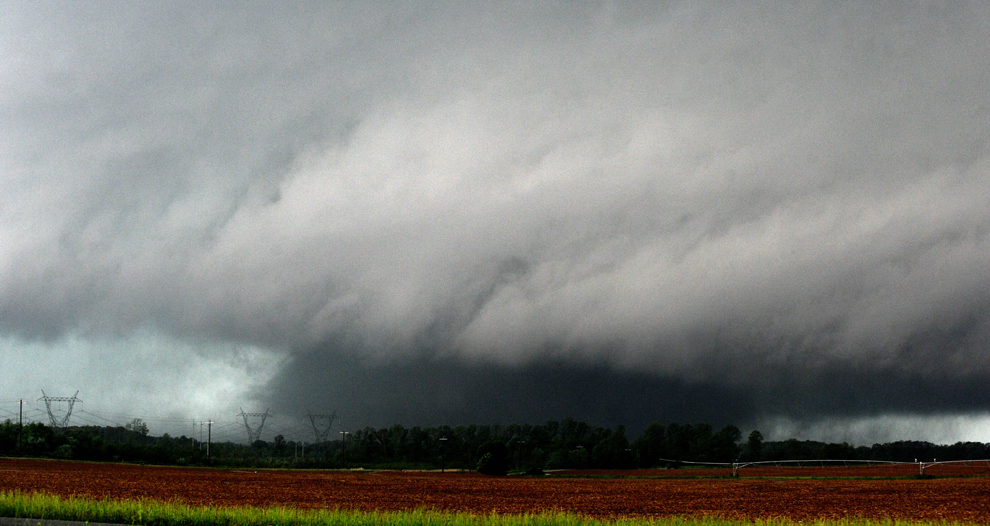 The grim death toll from the 24-hour storm period continued to rise, with 294 counted in six states. Among them were two university students in Alabama. Nearly 1 million people were without electricity. 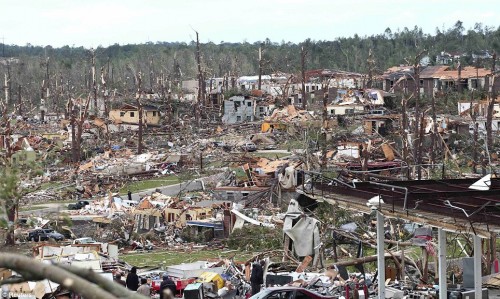 The vast majority of fatalities occurred in Alabama, where at least 207 people perished, according to state and local officials. The epicenter of the state’s misery was in Tuscaloosa. The South endured the second deadliest tornado outbreak in the nation’s history since 1950. Weather experts said humidity, cooler temperatures and vertical wind shear made for a deadly concoction. The death toll in the hard-hit city of Tuscaloosa, in west-central Alabama, was at 38 as of Thursday morning. 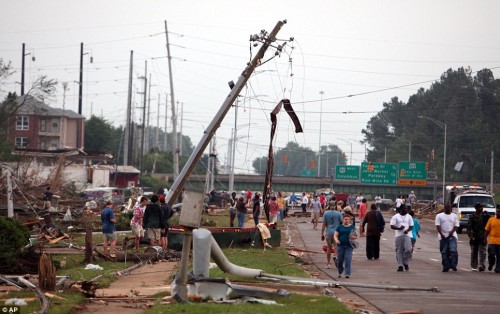 Violent weather claimed lives in 19 Alabama counties, with Tuscaloosa County at the top of the list. Thirty-two people perished in DeKalb County in northeastern Alabama, and 14 died in Jefferson County, home to Birmingham. The death toll for Franklin County stood Thursday evening at 27. More than 1,700 people were treated for injuries at trauma centers and hospitals in Alabama, including those treated and released. 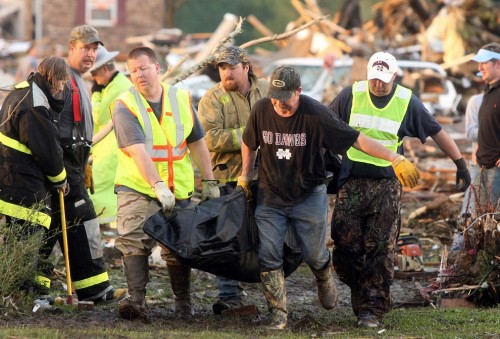 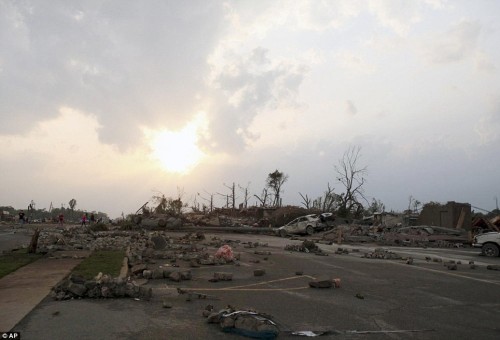 Eight people died and 28 were hospitalized in the agricultural community of Apison, east of Chattanooga, Tennessee. The town of Ringgold, Georgia, about 17 miles southeast of Chattanooga, was hit particularly hard, officials said. The storm also unleashed as many as 80,000 chickens in Pickens County, Georgia, after four huge coops were destroyed. A nearby three-story Super 8 Motel collapsed, killing at least seven people. WXIA-TV reports that Ringgold Police requested a “mass casualty morgue” to be set up at the destruction site. 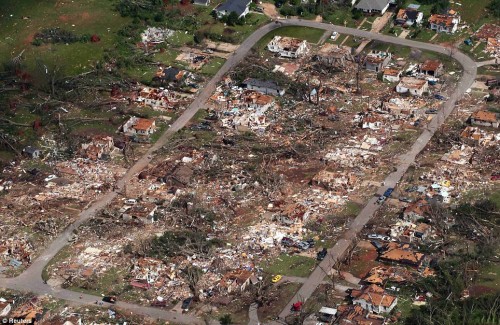 “This could be one of the most devastating tornado outbreaks in the nation’s history by the time it’s over,” CNN meteorologist Sean Morris said.

Obama is asked for a major disaster declaration. According to FEMA, such declarations are made when “an incident is of such severity and magnitude that effective response is beyond state and local capabilities and that federal assistance is necessary.“ 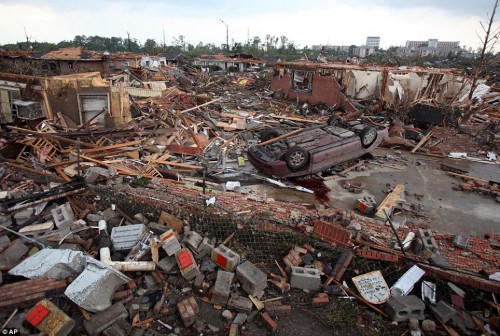 A widespread outbreak of severe weather across the Deep South may be one for the record books, as the National Weather Service received reports of more than 150 tornadoes. The long-term average for confirmed tornadoes in April is 116. The deadly phenomena can be spawned from rotating thunderstorms called supercells, which can stretch across areas as large as entire counties. A tornado can form when a mesocyclone — a rotating column of air — is created within a super cell storm and is stretched to create a funnel-like structure that can reach speeds of up to several hundred miles per hour.

The worst tornado outbreak in U.S. history occurred in April 1974, when 148 twisters touched down in 13 states over a 16-hour period, according to the National Weather Service. The agency said 330 people died and 5,484 were injured in a path of damage that covered more than 2,500 miles.That month saw a total of 267 tornadoes — the largest number recorded since 1950.(CNN) 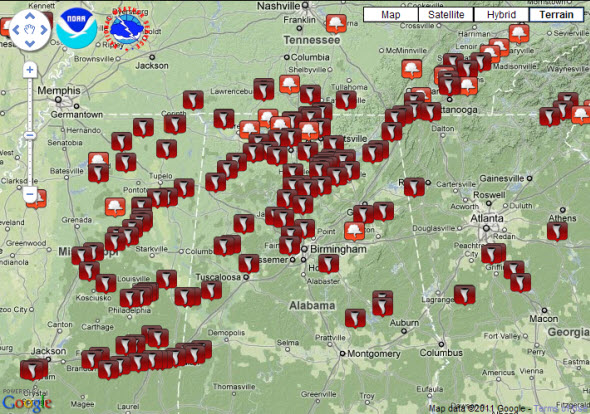 Tornadoes even occurred as far north as upstate New York on Wednesday night. One such tornado struck Swartwood, N.Y., damaging six homes to the point they are now deemed uninhabitable. Wednesday’s massive tornado outbreak got under way when a tornado was spotted in Esperanza, Miss., just after 9 a.m. CDT. A twister was sighted later on near Lawrenceburg, Tenn., around 10:40 a.m. CDT. Another possible tornado touched down one mile north of Decatur, Ala., around 11:30 a.m. CDT, while debris was reported with a tornado near Athens High School in Athens, Ala., around the same time. 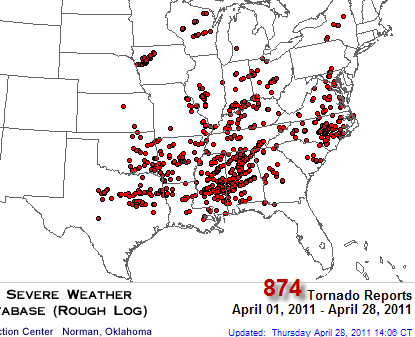 The most extreme tornado in recorded history was the Tri-State Tornado, which roared through parts of Missouri, Illinois, and Indiana on March 18, 1925. It was likely an F5, though tornadoes were not ranked on any scale in that era. It holds records for longest path length (219 miles, 352 km), longest duration (about 3.5 hours), and fastest forward speed for a significant tornado (73 mph, 117 km/h) anywhere on earth. In addition to it, it is the deadliest single tornado in United States history (695 dead). It was also the second costliest tornado in history at the time, but has been surpassed by several others non-normalized. When costs are normalized for wealth and inflation, it still ranks third today.

The deadliest tornado in world history was the Daultipur-Salturia Tornado in Bangladesh on April 26, 1989, which killed approximately 1,300 people. Bangladesh has had at least 19 tornadoes in its history kill more than 100 people, almost half of the total in the rest of the world.

The most extensive tornado outbreak on record, in almost every category, was the Super Outbreak, which affected a large area of the central United States and extreme southern Ontario in Canada on April 3 and April 4, 1974. Not only did this outbreak feature an incredible 148 tornadoes in only 18 hours, but an unprecedented number of them were violent; 7 were of F5 intensity, and 23 F4. This outbreak had a staggering 16 tornadoes on the ground at the same time at the peak of the outbreak. More than 300 people, possibly as many as 330, were killed by tornadoes during this outbreak. The Super Outbreak of April 3–4, 1974 spawned 148 confirmed tornadoes across eastern North America and resulted in the second highest death toll (319) for a tornado outbreak in the United States. Not only did it produce an exceptional number of tornadoes, but it was also an inordinately intense outbreak producing dozens of large, long-track tornadoes, including 7 F5 and 23 F4 tornadoes. More significant tornadoes occurred within 24 hours than any other week in the tornado record.

During the F5 tornado that moved into Oklahoma City on May 3, 1999, a Doppler On Wheels situated near the tornado measured winds of 301 +/- 20 mph (484 +/- 32 km/h) momentarily in a small area inside the funnel approximately 100 m (330 ft) above ground level. Winds were measured at 257-268 mph (414–431 km/h) using portable doppler radar in the Red Rock Tornado during the Andover, Kansas Tornado Outbreak. Though these winds are possibly indicative of an F5 strength tornado, this particular tornado’s path never encountered any significant structures and caused minimal damage. Thus it was rated an F4. The highest forward speed is 73 mph (117 km/h) from the Tri-State Tornado (other weak tornadoes have approached or exceeded this speed, but this is the fastest forward movement observed in a major tornado).

An apparent tornado is recorded to have struck Tlatelolco (present day Mexico City), on August 21, 1521, two days before the Aztec capital’s fall to Cortés. Many other tornadoes are documented historically within the Basin of Mexico. The earliest recorded tornado in Europe struck Isdalla, near Kilbeggan, Ireland on April 30, 1054. The earliest known British tornado hit central London on October 23, 1091 and was especially destructive. (Wikipedia) 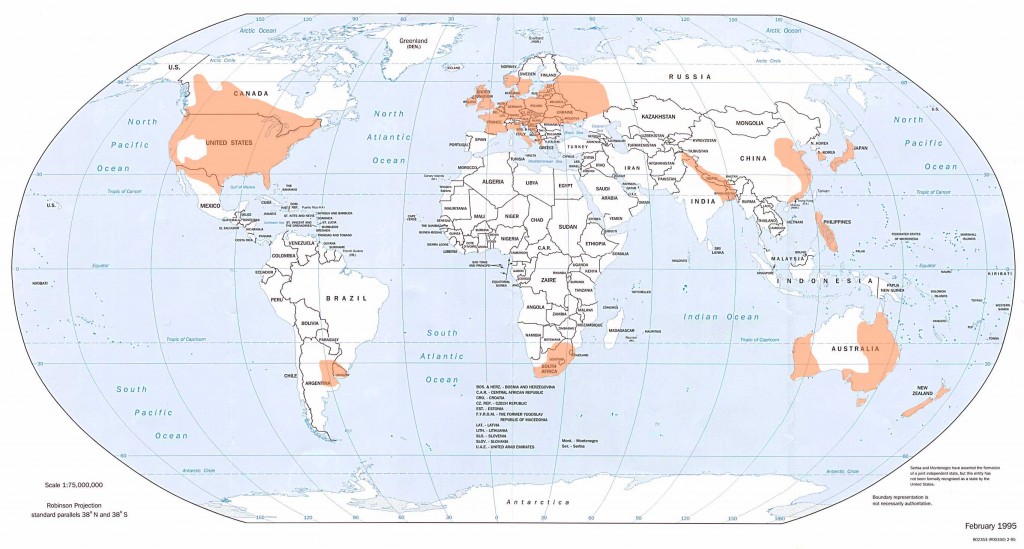