The Eta Aquarid meteors usually provide a solid display at the beginning of May. Few annual meteor showers provide a decent show for the southern hemisphere observers as the Eta Aquarid do. That is because the radiant is very near a Y-shaped asterism in northern Aquarius constellation.

According to International Meteor Organization (IMO) the peak of the Eta Aquarids will be on May 6, 2013 at 1:00 UTC. This should favor skywatchers on European longitudes eastward on May 6  during the morning hours. Also, the Eta Aquarid radiant rises only a few hours before dawn producing optimal conditions for observing in the same time period. Since the meteor shower is active from April 19th to May 28th, to predict the peak of the shower can often be an inexact science. For North American viewers to observe an early arrival of the Eta Aquarids on May 5th or even the morning of the 4th could still be possible.

Eta Aquarids are flakes of dust from Halley’s Comet, left behind since the comet last visited Earth in 1986. Our planet passes through the stream twice annually in May and October, resulting with the Eta Aquarid meteor shower in May, and Orionids in October. Both showers are caused by Halley’s Comet. Earthgrazers (meteors that skim horizontally through the upper atmosphere) are slow and beautiful, streaking far across the sky. The best time frame to detect Earthgrazers is between 2:00 to 2:30 a.m. local time when Aquarius is just peeking above the horizon.

The Eta Aquarids are named after a 4th-magnitude star in the constellation Aquarius. The star has no direct connection with the meteor shower except that, coincidentally, meteors appear to emerge from a point nearby. Eta Aquarii is 156 light years away from Earth and 44 times more luminous than the Sun. The constellation Aquarius does not rise very far above the horizon in the northern hemisphere, and that is the reason why northerners see relatively few meteors. But the ones they do observe might be spectacular Earthgrazers. 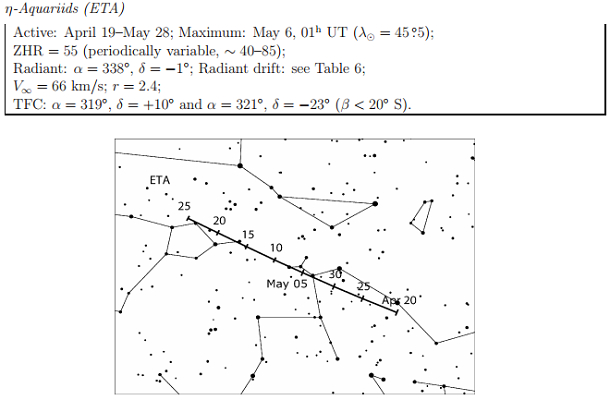 Typical Eta Aquarid meteors are as bright as a 3rd magnitude star, and the meteoroids hit Earth’s atmosphere traveling at 66 km/s. The fast and often bright meteors make the wait for radiant-rise worthwhile, and many events leave glowing persistent trains after them. While the radiant is still low, Eta Aquarids tend to have very long paths, which can mean observers underestimate the angular speeds of the meteors, so extra care is needed when making such reports.

IMO analyses in recent years, based on data collected between 1984–2001, have shown that ZHRs (Zenithal Hourly Rate) are generally above 30 between about May 3–10, and that the peak rates appear to be variable on a roughly 12-year timescale. Assuming this Jupiter-inﬂuenced cycle is borne-out, the next trough is due around 2014–2016, so ZHRs should be relatively modest in 2013, according to this idea. Activity around the most recent ZHR peak period in circa 2008 and 2009 seemed to have been ~ 85 and 65 respectively, with ZHRs up to ~ 65 recorded again in 2011. 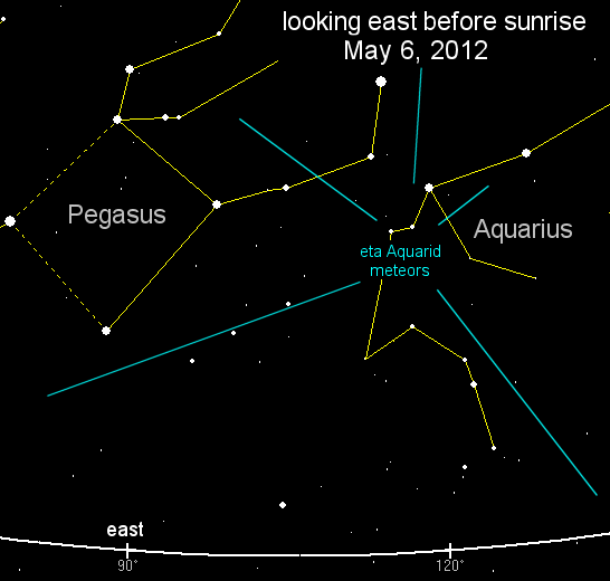 This year’s ZHR will probably reach 55. This year also offers near-perfect prospects, because the Moon is just a 17% illuminated waning crescent only 4 days from New at the meteor shower’s peak. The radiant culminates at about 08h local time.

Experienced meteor watchers suggest the following viewing strategy: Dress warmly. Bring a reclining chair, or spread a thick blanket over a flat spot of ground. Lie down and look up somewhat toward the east. Meteors can appear in any part of the sky, although their trails will point back toward Aquarius.