Tropical Storm Warnings are in effect but the system is not intensifying.

Maximum sustained winds were near 140 km/h (85 mph), with higher gusts. Little change in strength is expected through Saturday, with weakening expected on Sunday.

NOAA's Central Pacific Hurricane Center (CPHC) said a decrease in forward speed is expected Saturday night and Sunday, with a turn toward the west.

Heavy rainfall with total rain accumulations between 15 – 45 cm (6 and 8 inches), as well as isolated totals of 30 cm (12 inches) are possible. Heavy rain could potentially affect the other islands Saturday and Sunday.

This rainfall could cause life-threatening flash floods and mud slides. 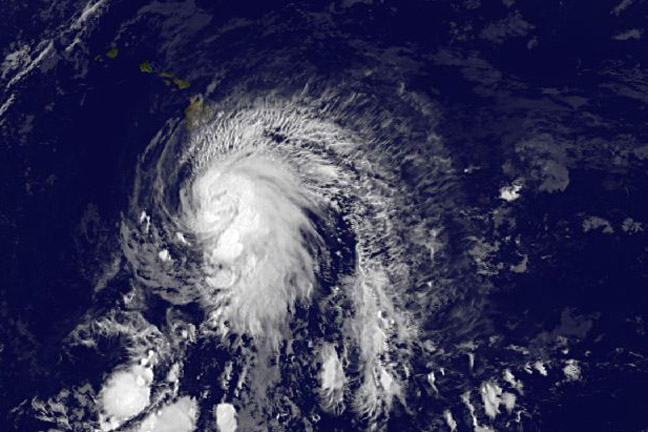 CPHC noted that large swells are expected to build over the eastern end of the main Hawaiian island chain Friday through Saturday. These large swells will continue to spread up the island chain through the weekend.

Surf produced by these swells could potentially be damaging along exposed south and southeast shorelines on Saturday and persist through the weekend in some areas.

No hurricane has landed a direct hit on Hawaii since Iniki, a Category 4 hurricane that struck in September of 1992, killing six people and causing damages estimated at $2.4 billion.