A strong phreatic eruption occurred at the crater lake of Poas volcano on October 14, 2014. The explosion ejected mud and water more than 200 m into the air. According to first news articles, nobody was hurt, but the visiting areas have been evacuated.

Today's eruption was similar to the one on October 8, 2014, the strongest eruption of the year so far.

Poas began the current cycle of phreatic activity in March 2006 and the same has been characterized by the sporadic occurrence of numerous small scale eruptions.

From mid-2009 until the present Observatorio Vulcanologico y Sismologico de Costa Rica-Universidad Nacional​ (OVSICORI-UNA) observed a general increase in the occurrence of phreatic eruptions. Some had enough energy to generate columns that exceed height of 200 – 300 meters. 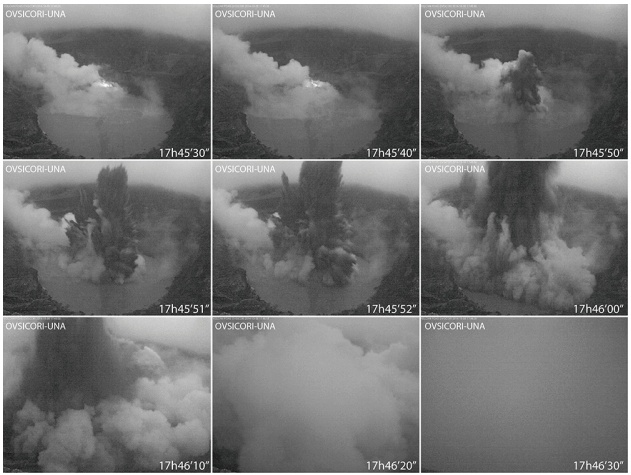 Poas last appeared in GVP's weekly volcano report during the week of September 3 – 9, 2014:

"OVSICORI-UNA reported that three consecutive phreatic eruptions occurred within the crater lake of Poás on August 27, each within 2 minutes of the previous one. One explosion generated a plume up to 200 m above the surface of the lake. Based on seismic energy released, this event was similar to the eruption on June 1, one of the largest of the year which partially destroyed a gas-measuring station.

The broad, well-vegetated edifice of Poás, one of the most active volcanoes of Costa Rica, contains three craters along a N-S line. The frequently visited multi-hued summit crater lakes of the basaltic-to-dacitic volcano, which is one of Costa Rica's most prominent natural landmarks, are easily accessible by vehicle from the nearby capital city of San José. A N-S-trending fissure cutting the 2708-m-high complex stratovolcano extends to the lower northern flank, where it has produced the Congo stratovolcano and several lake-filled maars. 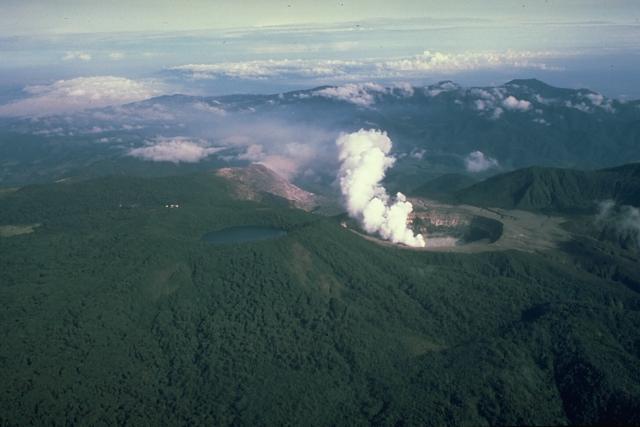 The southernmost of the two summit crater lakes, Botos, is cold and clear and last erupted about 7500 years ago. The more prominent geothermally heated northern lake, Laguna Caliente, is one of the world's most acidic natural lakes, with a pH of near zero. It has been the site of frequent phreatic and phreatomagmatic eruptions since the first historical eruption was reported in 1828. Eruptions often include geyser-like ejections of crater-lake water. (GVP)