Satellite imagery of Bardarbunga eruption has been scarce because of persistent cloud cover and a relatively small number of spacecraft that collect images at high latitudes but in the past few days NASA satellites have finally been able to observe the event from orbit.

At 12:45 UTC on August 31, 2014, the Moderate Resolution Imaging Spectroradiometer (MODIS) on NASA’s Aqua satellite acquired these views of the eruption. The false-color image uses a combination of infrared and visible light (MODIS bands 7-2-1) to highlight the heat signatures of the erupting lava and to distinguish glacial ice from clouds. 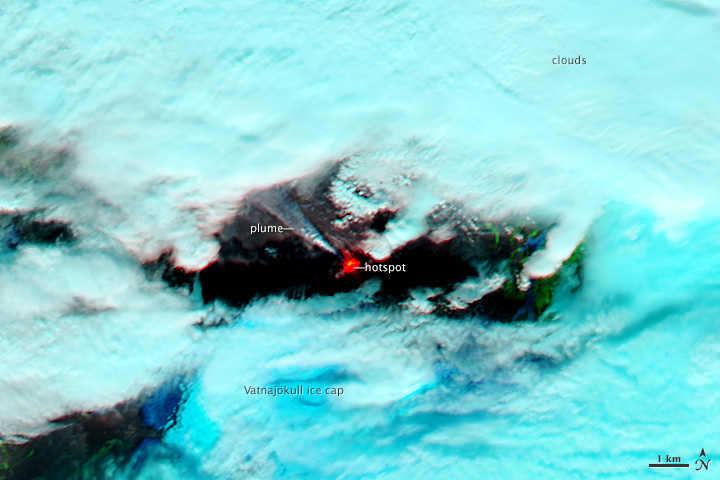 In the following, natural-color image, the lava appears black. 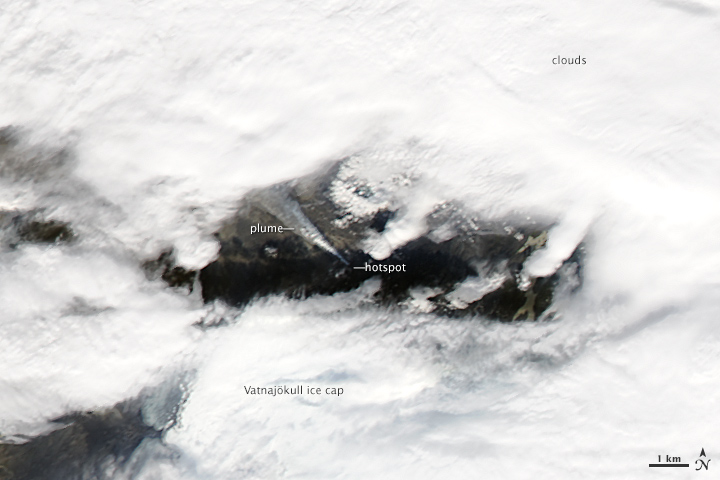 Overnight on September 1, the Advanced Land Imager (ALI) on NASA’s Earth Observing-1 satellite captured the first high-resolution view of the scene. The image below is a composite of a natural-color observation from August 27 overlaid with an infrared (IR) night view from September 1. The night view combines shortwave IR, near IR, and red wavelengths (bands 9-7-5) to tease out the hottest areas within the vent and lava field. (EO)

The image shows at least a 1-kilometer fissure and lava flowing in channels. The front of the flow has been moving mostly to the northeast in recent days. 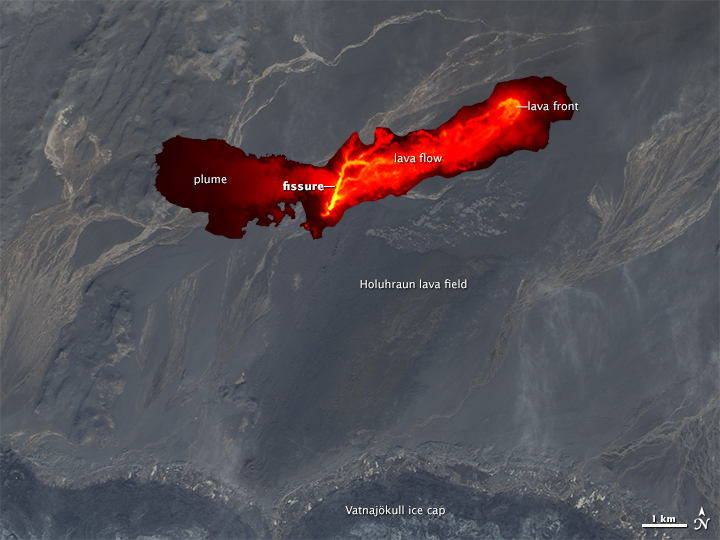 Intense earthquake swarm near the volcano began on August 16, 2014.  Since then, vast amounts of magma have formed a sheet of freshly cooled rock, called a dyke, that stretches for about 45 kilometers north of Bárðarbunga.

Evgenia Ilyinskaya, a volcanologist with the British Geological Survey in Edinburgh, said that the sheer volume of magma involved — perhaps some 0.4 cubic kilometres in the dyke — suggests that it is coming directly from Earth’s mantle. That places the source perhaps hundreds of kilometers below the surface of the crust, rather than in a shallow magma chamber of the sort found beneath many volcanoes. (Nature)

According to Icelandic Met Office situation update report published on September 3 at 19:00 UTC, persistent seismic activity is still detected in the northern part of the dyke intrusion, between the eruption site and south to about 6 km into Dyngjujökull.

"Event rates are lower than in recent days. Some events are detected in Bárðarbunga, all of them were smaller than magnitude 4 since the M5.5 event last night at 03:09 UTC. The volcanic activity at the fissure in Holuhraun is continuous, no significant changes were reported from scientists in the field.

The origin of the increased tremor signal since this morning is still unclear and data is still analyzed. However, there are no signs of a subglacial eruption under Dyngjujökull. No obvious changes such as increased water flow or cauldrons on the glacier surface were observed from scientists onboard TF-SIF this afternoon. Water meters in Jökulsá á Fjöllum do not show any unusual changes in discharge and electric conductivity. The low frequent tremor signal is still continuing, its strength is variable." (IMO)