The Icelandic Met Office has detected numerous small earthquakes from June 19 to 23 ESE of Bardarbunga volcano, an area active since the end of the eruption in February 2015.

"The last eruption in this area started in February 1726 (+- 30 days) and ended in May 1726 (+- 30 days), but more eruptions might have taken place at this location without being known or detected by people in the past," Jón Frímann, an avid observer of volcanic activity on Iceland, noted.

"The depth of this earthquake swarm is considerable. Deepest earthquake recorded had a depth of 30.4 km (18.8 miles) and it is possible that it might be an error or poor location, other earthquakes recorded had a shallower depth. The crust in this location is up to 45 km (29.7 miles) thick according to measurements. It is not possible to know if this earthquake activity is going to result in an eruption. If an eruption happens it might happen without any warning and not a lot of earthquake activity before it happens."

There were no volcanic tremors detected, IMO said. 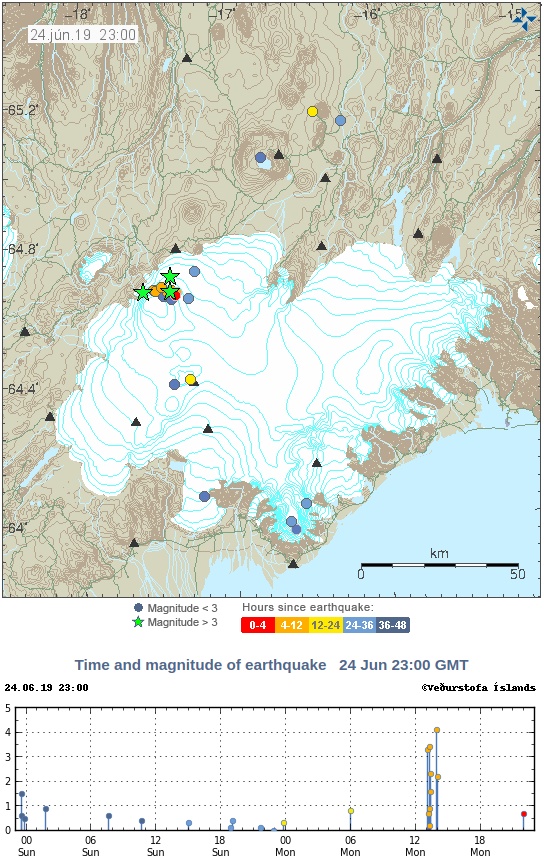 A similar swarm of earthquakes was detected in the northern part of the Bardarbunga volcano caldera, Iceland on June 14, 2018.

The M4.9 quake is the largest earthquake since the end of Bardarbunga's last eruption in 2015 along with another one of the same magnitude that occurred on January 30, 2018.