Icelandic Met Office (IMO) is reporting a sharp increase in seismic activity close to subglacial stratovolcano Bárðarbunga in NW Vatnajökull ice cap​. A seismic swarm has been ongoing since 03:00 UTC on August 16, 2014, and near continuous earthquakes have been occurring since then.

This is the most intense earthquake swarm in this area for years, according to IMO. The last confirmed eruption of this volcano took place on June 18, 1910 (VEI 2), while the largest known eruption (VEI 6) took place in February 1477. In historic times there have been large eruptions of this volcano every 250 – 600 years.

The depths of earthquakes in the present swarm are in the upper crust and their magnitudes are mainly around 1.5; a few earthquakes are of magnitude greater than ML3.

Long-term seismic and GPS data indicate that there is increased unrest in the northwestern region of Vatnajökull glacier, where Bárðarbunga is located:

Over the last seven years seismic activity has been gradually increasing in Bárðarbunga and the fissure swarm north of the volcano. This activity dropped down at the Grímsvötn eruption in May 2011, but soon after, the activity started to gradually increase again and has now reached similar level of activity to that just before the Grímsvötn eruption. Earlier this year, in the middle of May 2014, there was a small swarm of over 200 events and now the present swarm has already generated at least 300 earthquakes. 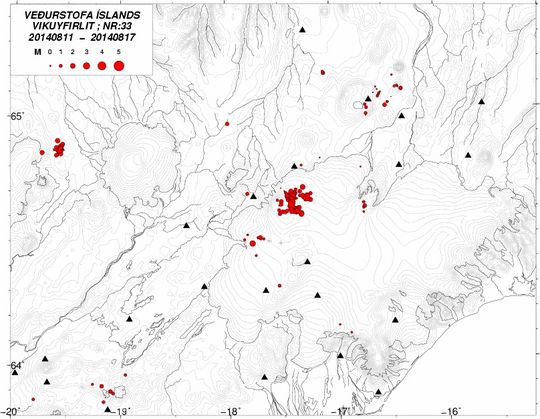 Since early June 2014, displacements at GPS stations around Vatnajökull (Hamarinn, Grímsfjall, Vonarskarð and Dyngjuháls) show an increased upward movement and away from Bárðarbunga.

Together, these two systems indicate magma movements in Bárðarbunga. Due to increased seismicity IMO has decided to turn volcano Bárðarbunga status to yellow on the aviation color code map. In case of a sub-aerial eruption, an ash plume of potential concerns for aviation will be generated.

At 23:00 on August 16, there was no unequivocal indication that magma has reached the surface.

The Global Volcanism Program has no Weekly Reports available for Bárdarbunga.