After the second named storm of the 2014 Atlantic Hurricane Season, Tropical Storm "Bertha", lashed the Caribbean it drifted away, quickly intensified and became hurricane on August 4, 2014. Bertha has significantly weakened since then but soon after it left the Caribbean it merged with a frontal system in the North Atlantic Ocean. The storm crossed the Atlantic and its remnants are now on approach to southern UK and northern France.

Bertha first crossed over the Dominican Republic on Sunday, August 3, 2014, just southwest of Puerto Rico, dropping 3 to 5 inches (8 – 13 centimeters) of rain, with isolated amounts of up to 8 inches. Overflowing rivers let to the temporary evacuation of dozens of families.

Authorities in Puerto Rico said nearly 29 000 households were without electricity Sunday. Most of the power outages occurred in the central mountainous region following more than 1 200 lightning strikes that occurred in the area during afternoon hours alone.

However, the rainfall was welcomed by many in parched sections of the U.S. Caribbean island, where a moderate drought has withered crops. (FoxNews)

There were no reports of damage in the Turks & Caicos or the southern Bahamas. 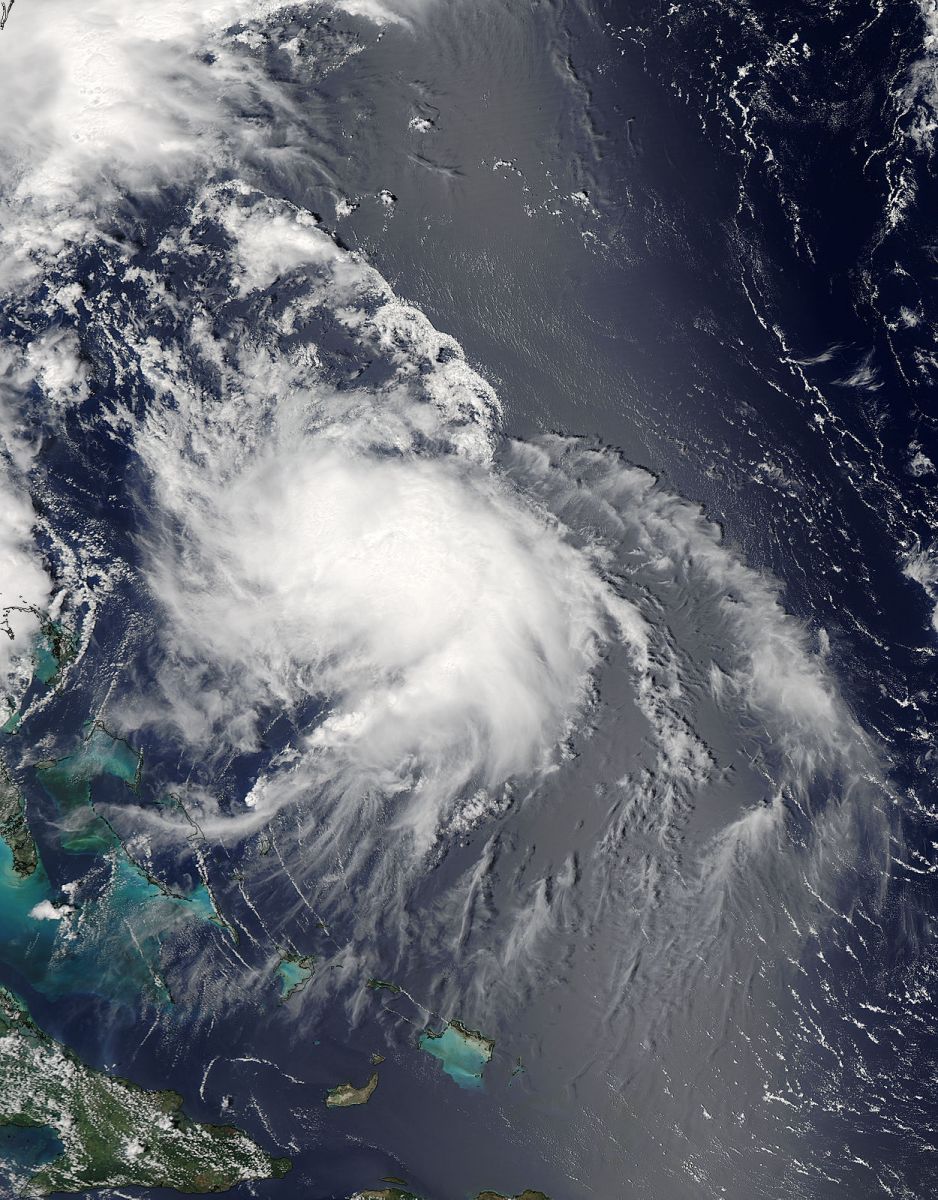 This visible image of Hurricane Bertha off the Bahamas at 15:00 UTC on August 5, 2014,  was taken by the MODIS instrument aboard NASA's Aqua satellite. Image Credit: NASA Goddard MODIS Rapid Response Team.

After its brief episode as a hurricane, a visible satellite image captured by NOAA's GOES-East satellite on at 12:00 UTC on August 6 shows that Post-Tropical Storm "Bertha" was merging with a frontal system in the North Atlantic Ocean. 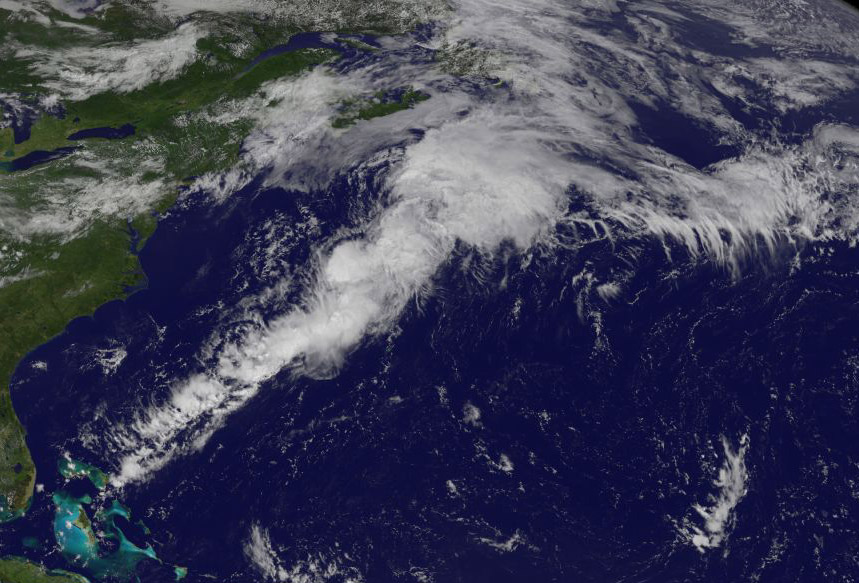 The image was created from data from NOAA's GOES-East satellite and the circulation center of Bertha is barely discernable. Bertha's circulation was connected to a stationary front that stretched from northeastern Canada to the Bahamas creating what looks like a giant tail stretching from the low pressure area. Satellite imagery showed that there were no strong thunderstorms associated with Bertha's center.

At 15:00 UTC on August 6, the National Hurricane Center (NHC) noted that Bertha acquired extra-tropical characteristics and had maximum sustained winds near 50 mph (85 km/h). It was located about 305 miles (495 km) south of Halifax, Nova Scotia, Canada.  Bertha was speeding to the northeast at 31 mph (50 km/h).

The NHC noted that the low is moving toward the northeast and is being steered by the mid-latitude westerlies [winds]. "Most of the global models keep the post-tropical cyclone moving rapidly northeastward and then eastward over the North Atlantic." (Goddard)

On August 8, UK Met Office warned that remnants of Hurricane "Bertha" will continue to track towards the UK during the next few days.

At the moment southern parts of the UK look as though they are most at risk during Sunday, followed by areas of northeast Scotland on Monday, they warned. "However, there is also the possibility that the depression could move across northern France as a weak feature."

Their chief Meteorologist, Paul Gundersen, said: "Rain and strong winds may well bring disruption, especially across southern parts of the UK, with the potential for more than 50 mm of rain and coastal gusts of over 60 mph. People should stay up to date with the latest Met Office warnings."

Ross Macloed, RNLI Coastal Safety Manager, said: "Extreme wave heights combined with high tides can make some normal coastal activities we take for granted significantly more risky; the force of surging water or breaking waves can easily knock you over and quickly drag you out of your depth and once in the water it can be difficult to get out. As little as one cubic meter of water weighs a tone and shows that you should never underestimate how powerful the sea can be.

Met Office records show that there are similar examples of intense low pressure systems occurring in August, for example, the August 24, 2005 where an active storm sat off the northwest coast of Scotland bringing strong winds and heavy rain. On the August 30, 1992 a depression swung up from the southwest across the UK giving a wet and windy Bank Holiday weekend. 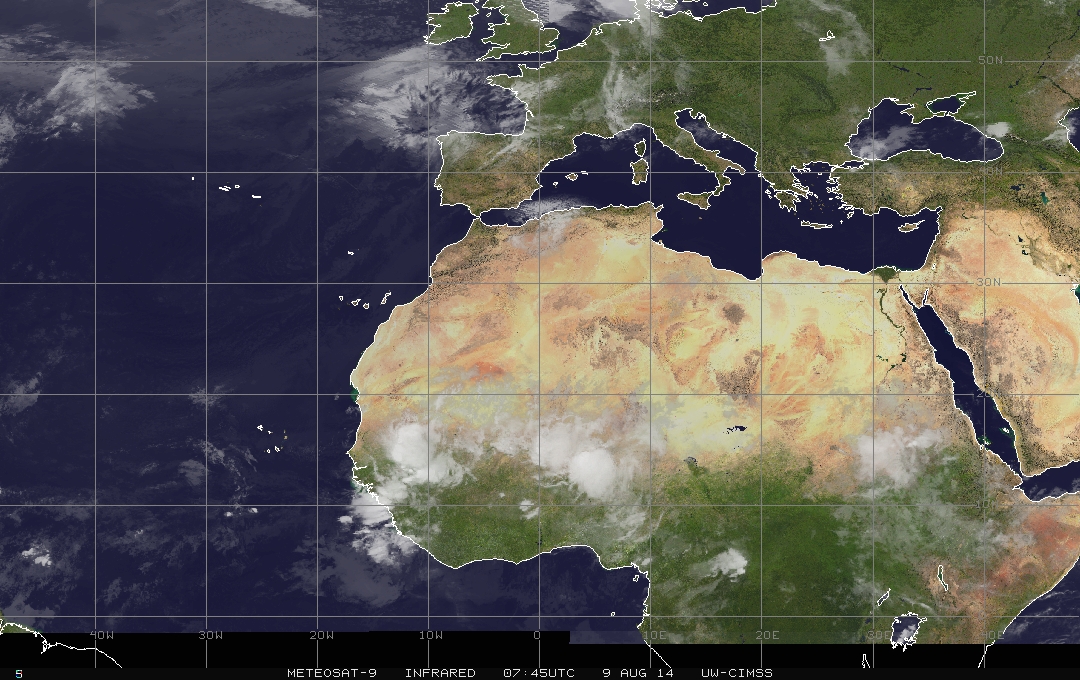