Persistent heavy rains over the weekend triggered severe flooding in parts of Florida, with a total of 185.4 mm (7.3 inches) recorded in Miami over a 48-hour period to Monday, May 25– the city's heaviest two-day rainfall since 2012. Another bout of intense downpour hit the city on Tuesday evening, May 26, leaving many areas underwater. At 12:30 UTC on Wednesday, May 27, the disturbance that brought heavy rains organized into Tropical Storm "Bertha" — the second named storm of the 2020 Atlantic hurricane season.

About 200 to 250 mm (8 to 10 inches) of rain fell across a wide swath over the weekend, from Fort Lauderdale to the upper Keys. Many areas were underwater as streets turned into lagoons due to rising floodwaters.

Relentless downpours lasted through Monday, with a total of 185.4 mm (7.3 inches) of rain recorded over a 48-hour period in Miami. This was the city's heaviest two-day rainfall since 2012, greater than during Category 4 Hurricane Irma in 2017.

Significant flash flooding hit the city, with the Brickell neighborhood as the worst-hit. Rains of up to 264.2 mm (10.4 inches) were recorded in Tequesta and 226 mm (8.9 inches) in nearby Jupiter.

This is the situation on Biscayne Boulevard in areas from around 80th Street northward to at least 123rd Street. If you’re in Miami, this is a DANGEROUS FLASH FLOODING SITUATION UNFOLDING. More rain coming. Flash Flood Warning from @NWSMiami #FLwx TURN AROUND DON’T DROWN!!!! pic.twitter.com/LUYjT9eub5

"Previously, we were in moderate drought for the area," said Paxton Fell, a meteorologist with the National Weather Service (NWS), noting that although the rainfall was good for drought-stricken areas in the state following its driest March on record, it also resulted in major flooding.

"All this rainfall definitely helped, but since we’re so saturated, the ground can’t handle much," he added.

Another round of intense drenching hit Miami Tuesday evening, flooding the streets in some parts of the city, including the area along Biscayne Boulevard.

Power was disrupted to more than 13 000 houses and businesses in Miami-Dade county.

Here’s a photo of Brickell   pic.twitter.com/mKULwogcQ8

The disturbance organized into Tropical Storm "Bertha" at 12:30 UTC on May 27 near the coast of South Carolina. At 13:30 UTC, Bertha made landfall near Mount Pleasant with maximum sustained winds of 85 km/h (50 mph) and minimum central pressure of 1 005 hPa.

Bertha is moving toward the north near 24 km/h (15 mph) and this general motion is expected to continue through tonight with a gradual increase in forward speed. On the forecast track, Bertha will move inland across eastern and northern South Carolina later today and into central North Carolina by tonight.

A Tropical Storm Warning is in effect for the coast of South Carolina from Edisto Beach to South Santee River.

Bertha is expected to weaken to a tropical depression later today and become a remnant low tonight. 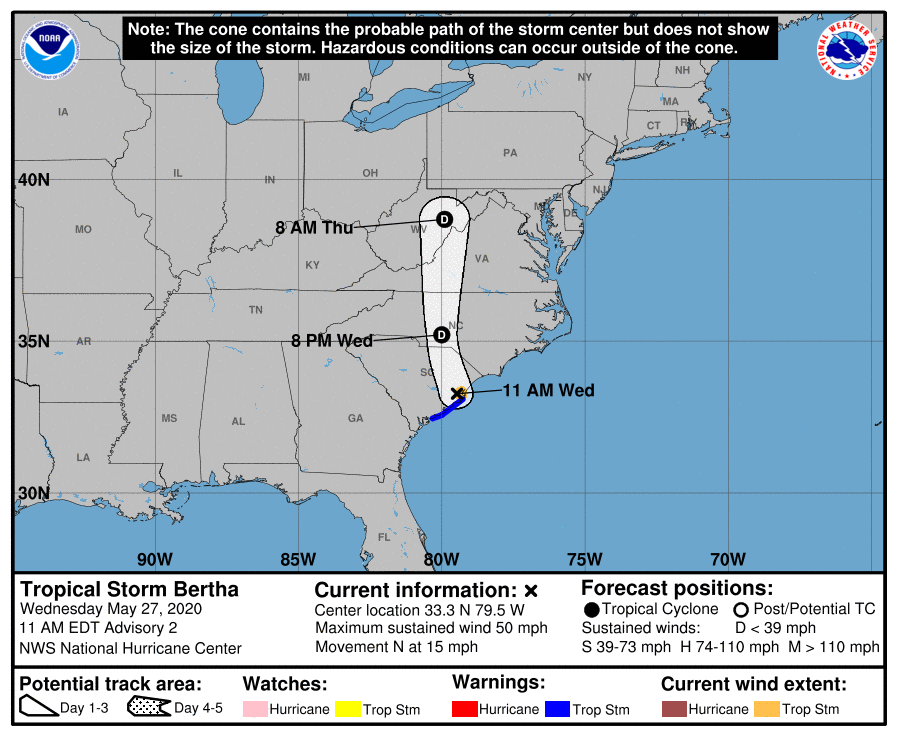 Tropical-storm-force winds extend outward up to 35 km (25 miles) from the center.

The system is expected to produce total rain accumulation of 50 to 100 mm (2 to 4 inches) with isolated totals of 200 mm (8 inches) across eastern and central South Carolina into west central to far southeastern North Carolina and southwest Virginia.

The aftermath of the flash flood we just had on Miami Beach. #miamibeach #flood pic.twitter.com/6ElS0tsPlr