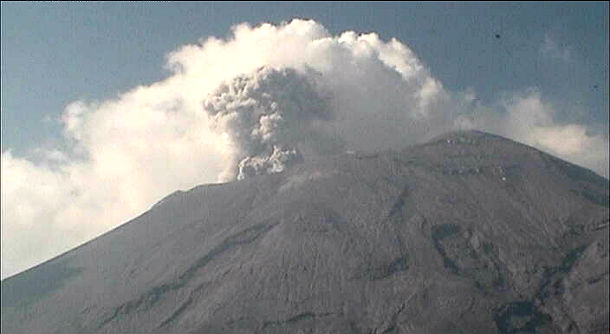 According to CENAPRED on May 11, 2013 during the last 24 hours the volcano monitoring system recorded 53 exhalations of low and moderate intensity, accompanied by emissions of steam, gas and ash sometimes. Also two explosions occurred of moderate magnitude, one at 06:10 UTC on May 10, 2013, and the other at 15:03 UTC, with the latter producing an eruption column height of 1 km and moved eastward. So it is possible that in villages of this area was submitted ashfall.

CENAPRED stated that this internal activity represents possible magma ascent. Nevertheless, except for low intensity exhalations of ash at the beginning of this episode, it hasn’t been reflected with any important external eruptive activity.

There were also present various segments of harmonic tremor of low and medium amplitude which totaled one hour 55 minutes and other segments of high amplitude harmonic tremor which totaled 11 minutes. There were also 3 volcano-tectonic earthquakes of low magnitude on May 9, 2013 at 16:30 UTC and on May 10, 2013 at 04:20 UTC and 14:11 UTC. From the morning of May 10, 2013 until 16:20 UTC the volcano produces a continuous emission of steam and gas traveling eastward. 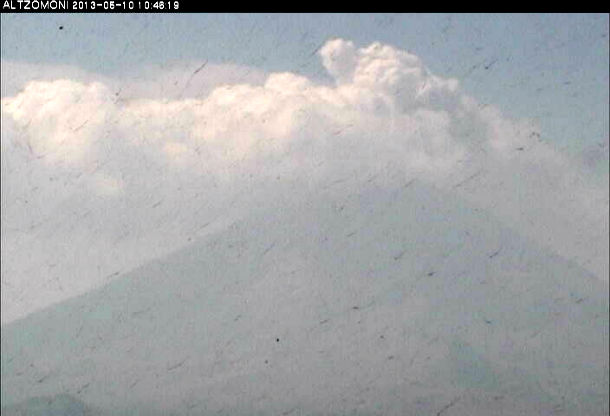 Webcam image of ash column over Popocatepetl recorded on May 10, 2013 (Credit: CENAPRED)

Volcanic Alert Level remains at Yellow Phase 2 – probability is maintained of the following scenarios: moderate exhalations, some with ash emissions, sporadic bursts of low to moderate probability of emission of incandescent fragments short distance and faint crater glow at the crater of the volcano overnight observable . Emphasis is placed on the following recommendations:

1. Continue the safety radius 12 km, so that staying in that area is not allowed.

3. A Civil Protection authorities, maintain preventive procedures, according to their operational plans.

4. A people, being attentive to the official information is disseminated.

Popocatepetl Volcano monitoring is performed continuously 24 hours. Any change in activity will be reported in due course.