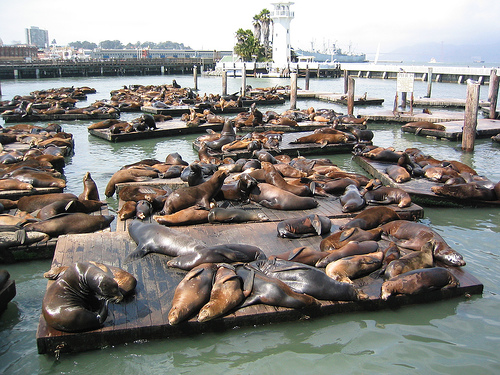 The mass stranding of sea lions at Californian shores doesn’t seem stopping anytime soon and condition has deteriorated even more. The stranding(s) spiked in January and have intensified in recent weeks, the numbers have already surpassed total number of an average year. By March 13th, there were 517 pups admitted to marine mammal rehabilitation centers and by April 4, the number has risen to 1100Wired. Authorities still don’t know what is the exact cause of the stranding. NOAA’s marine mammal stranding coordinator for the state of California, Sarah Wilkin said,

“We’re still getting strandings of animals at kind of equal rates to what they had been. We don’t know how long the event is going to go on.”

According to the National Marine Mammal Foundation it is a crisis of epic proportions (CBS8) and announced a challenge grant to help pay for sea lion’s care. Last week the National Oceanic and Atmospheric Association (NOAA) has declared an Unusual Mortality Event (UME) for California sea lions in California from January 2013 through the present. NOAA reports live sea lion strandings are nearly three times higher than the historical average. 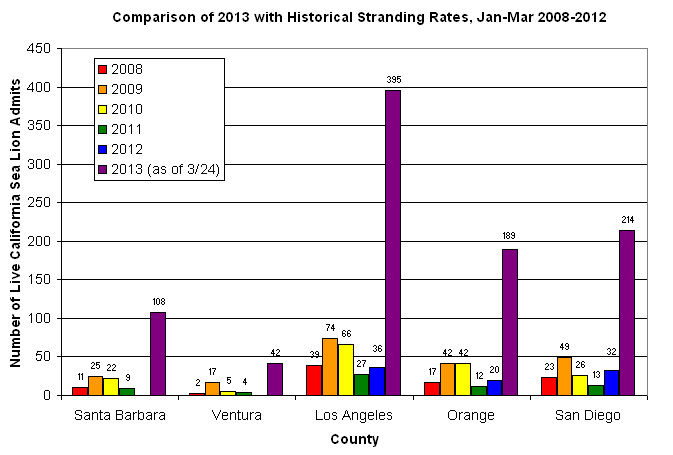 FUKUSHIMA RADIATION ONE POSSIBLE CAUSE

Radiation from Japan’s nuclear disaster is being looked at as one possible cause for what some experts are declaring an “unusual mortality event” after hundreds of ailing sea lion pups washed ashore in Southern California. Read more here.

These pups might have weaned themselves early and left their colonies while their mothers were foraging to longer distances for food. As they’re not strong enough to find food on their own, their quest for survival brings them to shore. Many pups now reaching shore are reportedly in even worse condition as compared to those found earlier this year, possibly because they’ve been on their own for longer duration.

Though this stranding is much similar to El Niño’s impact wherein sea lions starve because of food scarcity, researchers are yet to ascertain the accurate cause for such large influx of emaciated sea lions. Investigators are attempting to find out the reason for the same.

Rehabilitation centers Santa Barbara to San Diego are full, because of which pups not needing critical care have been left on beaches for observation till the time space for them is available. Marine Mammal Care Center at Fort MacArthur is at capacity with more than 100 animals on site. David Bard, Director of Operations at the center told,

“We’re working closely with the rescue agencies to prioritize the most critical animals on the beach first. As of the end of March, we exceeded the 400-intake mark. That’s the equivalent of an entire year’s worth of caseloads for us.”

Dead or alive stranded seal or Sea Lion can be reported at nearby stranding network. In case if you spot an animal that may appear stranded, do not try to help it. Instead call one of the Marine Mammal Centers: