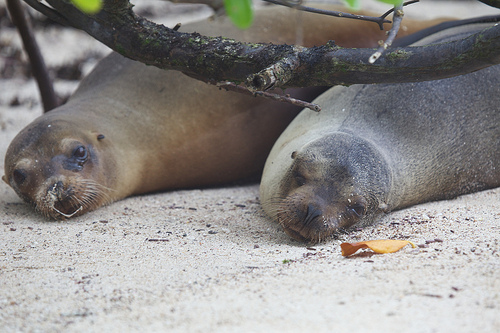 A worrying large number of dehydrated and emaciated sea lions are washing ashore Central and Southern Californian coastline from Santa Barbara to San Diego. Hundreds of these sick sea lion have been admitted to rescue centers so far and rescue groups are reporting substantial spike in number of these malnourished sea lions since January in comparison to previous years count during same period. Sharon Melin, a wildlife biologist with the National Fisheries Service told Wired,

“We’re in the process of trying to understand what is actually causing this. The stranding centers in Southern California are being inundated with animals. It hasn’t hit the northern centers yet.”

Most of sea lions are identified as pups – about 9 months – and should weigh between 25 and 30 kilograms. Whereas, these pups are about half of that and are not gaining weight, Melin found in her observations. Regional strandings coordinator with the National Oceanic and Atmospheric Administration, Sarah Wilkin noted that, as of March 13th, 517 pups had been admitted to 5 Southern Californian rescue centers, a total higher than some of the entire years and yet, the pace of admissions is still accelerating. Most of these stranded pups were found in areas near Channel Islands – the known breeding haven of sea lions.

Researchers are yet to find out the cause of such influx. They’ve hypothesized that these pups have weaned themselves early and left their colonies. As they’re not strong enough to find food on their own, their quest for survival brings them to shore. Another hypothesis is that disease or an environmental perturbation forced them to leave their homes, although scientists are not sure yet.

“There’s something going on oceanographically that there’s not sufficient food available for the moms to nurse their pups…” said Susan Chivers, a biologist with the National Marine Fisheries Service.

Elevation in influx similar to this one was noticed after a strong El Niño event in 1997-1998, except that one was more broadly distributed. El Niño is known for affecting food supply by warming ocean temperatures. Moss Landing Marine Laboratories Trainer, Stefani Skrovan points out lack of food availability and El Nino as probable reason why all the animals are showing up sick and starved. She said,

“El Nino is a very common and very silical pattern where almost all normal weather patterns shift and the prevailing winds die allowing the other winds to come with and actually reverse the ocean weather patterns.”

In case if you spot an animal that may appear stranded, do not try to help it. Instead call one of the Marine Mammal Centers: