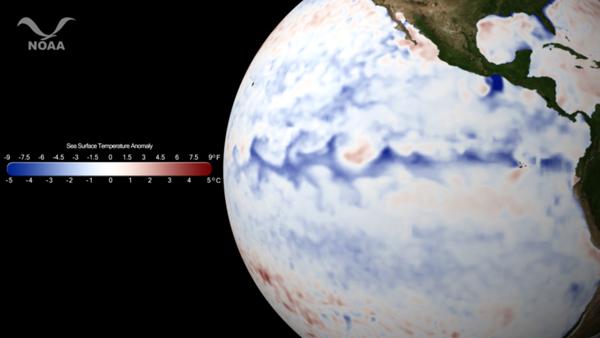 La Niña is defined as cooler than normal sea-surface temperatures in the central and eastern tropical Pacific ocean that impact global weather patterns. La Niña conditions recur every few years and can persist for as long as two years.

A sea surface anomaly, or departure from the average temperature, is calculated by subtracting the temperatures from a time period of interest from the 30-year average (1981-2010) for the same time period. The resulting data shows areas that are hotter or colder than normal. Sea surface temperature anomaly data allow scientists to quickly identify features of interest, especially for El Niño/La Niña, coastal upwelling, and hurricane intensification.

The strengthening La Niña in the Pacific Ocean brings with it a host of possible trends as outlined by the NOAA Climate Prediction Center’s Seasonal Outlook released October 20, 2011. These trends include lower than normal precipitation for the southwest and southern Great Plains and Mississippi Valley. Below normal temperatures are favored for southern sections of the Florida peninsula, northern Great Plains and northern Rockies. Trends favor modest warmer than normal conditions for much of the east.

La Niña is a coupled ocean-atmosphere phenomenon that is the counterpart of El Niño as part of the broader El Niño-Southern Oscillation climate pattern. During a period of La Niña, the sea surface temperature across the equatorial Eastern Central Pacific Ocean will be lower than normal by 3–5 °C. In the United States, an episode of La Niña is defined as a period of at least 5 months of La Niña conditions.

La Niña  is the opposite of El Niño, where the latter corresponds instead to a higher sea surface temperature by a deviation of at least 0.5 °C, and its effects are often the reverse of those of El Niño. El Niño is famous due to its potentially catastrophic impact on the weather along both the Chilean, Peruvian and Australian coasts, among others. La Niña is often preceded by a strong El Niño.

There was a strong La Niña episode during 1988–1989. La Niña also formed in 1995, and in 1999–2000. A minor La Niña occurred 2000–2001. The La Niña which developed in mid 2007 and lasted until early 2009, was a moderate one. NOAA confirmed that a moderate La Niña developed in their November El Niño/Southern Oscillation Diagnostic Discussion, and that it would likely continue into 2008. According to NOAA, “Expected La Niña impacts” during November – January include a continuation of above-average precipitation over Indonesia and below-average precipitation over the central equatorial Pacific. For the contiguous United States, potential impacts include above average precipitation in the Northern Rockies, Northern California, and in southern and eastern regions of the Pacific Northwest. Below-average precipitation is expected across the southern tier, particularly in the southwestern and southeastern states.

However, an El Niño returned in May–June 2009 and lasted until April 2010. The effects of El Niño in 2009 were already being seen in the fall of 2009 as the remnants of Tropical Storm Ida strengthened into a powerful coastal storm.

A new La Niña episode developed quite quickly in the eastern and central tropical Pacific in mid-2010, and lasted at least until early 2011. This La Niña, combined with record-high ocean temperatures in the north-eastern Indian Ocean, has been a large factor in the 2010–2011 Queensland floods, and the quartet of recent heavy snowstorms in North America starting with the December 2010 North American blizzard. The same La Nina event is also a likely cause of a series of tornadoes of above-average severity that struck the Midwestern and Northwestern United States in the spring of 2011, and is currently a major factor in the drought conditions persisting in the South Central states including Texas, Oklahoma and Arkansas. (Wikipedia)

For many decades, scientists have known about the oscillation in atmospheric pressure across the tropical Pacific at the heart of both El Niño and La Niña. However, La Niña’s effects on fisheries along the immediate coast of South America, where El Niño was named, are benign rather than destructive, so La Niña received relatively little attention there. Research on La Niña increased after its wider impacts (often called teleconnections) were recognized in the 1980s. (NOAA)

Researchers discovered that during non-El Niño years, surface pressures tend to be low over the warm waters of the equatorial western Pacific as overlying warm moist air rises and then diverges aloft.

Over the colder waters of the eastern equatorial Pacific, surface pressures tend to be higher as converging winds aloft contribute to the sinking of cool air. In much the same way as a ball rolls down a hill, air flows from high pressure in the east to low pressure in the west along this equatorial pressure gradient. This contrast in pressure is what drives the trade winds, the prevailing large-scale surface winds that blow from east to west. As these winds blow along the surface of the equatorial waters, there is a net transport of ocean water in a westward direction. As this occurs, cold, nutrient-rich water rises up (or upwells) along the coast of South America to replace the westward-moving surface water. This upwelling brings nutrients to the surface waters off the coast allowing the fish population living in these upper waters to thrive.

During La Niña years, the trade winds are unusually strong due to an enhanced pressure gradient between the eastern and western Pacific. As a result, upwelling is enhanced along the coast of South America, contributing to colder than normal surface waters over the eastern tropical Pacific and warmer than normal surface waters in the western tropical Pacific. (EarthObservatory)