A new study shows a link between the end of solar cycles and a switch from El Nino to La Nina events in the Pacific Ocean, indicating that solar variability can trigger seasonal weather variability on Earth. If the connection holds up, it could improve the predictability of the largest El Nino and La Nina events.

"Energy from the Sun is the major driver of our entire Earth system and makes life on Earth possible," said co-author Scott McIntosh, a scientist at the National Center for Atmospheric Research (NCAR).

"Even so, the scientific community has been unclear on the role that solar variability plays in influencing weather and climate events here on Earth. This study shows there's reason to believe it absolutely does and why the connection may have been missed in the past."

In this new study, the researchers relied on a more accurate 22-year clock for solar activity from the Sun's magnetic polarity cycle, which they outlined as a more regular alternative, compared to the 11-year solar cycle in several companion studies. 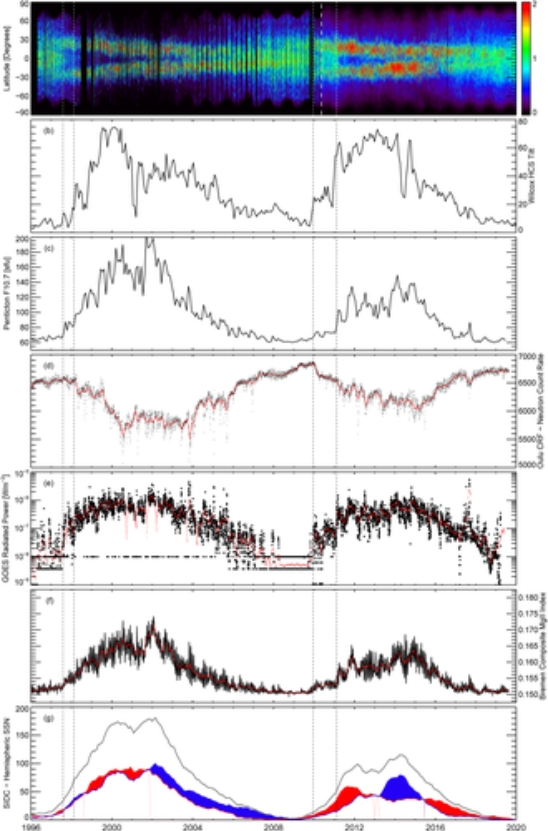 Image: Correlated variability of the Sun's output before and after the termination of solar cycles 22 and 23 in 1997 and February of 2011. Credit: Leamon, et al.

The 22-year cycle starts when oppositely charged magnetic bands that wrap the Sun appear near the polar latitudes. Over the cycle, the bands migrate toward the equator, causing sunspots.

The cycle ends when the bands meet in the middle, annihilating one another in what is called a "terminator event". These terminators give the exact guideposts for the end of one cycle and the start of the next.

After the team imposed the terminator events over sea surface temperatures in the tropical Pacific dating back to 1960, they found that the five events that took place between that time and 2010/11 all coincided with a switch from an El Nino event to a La Nina.

The end of the most current solar cycle, which is happening now, is also coinciding with the beginning of a La Nina event. 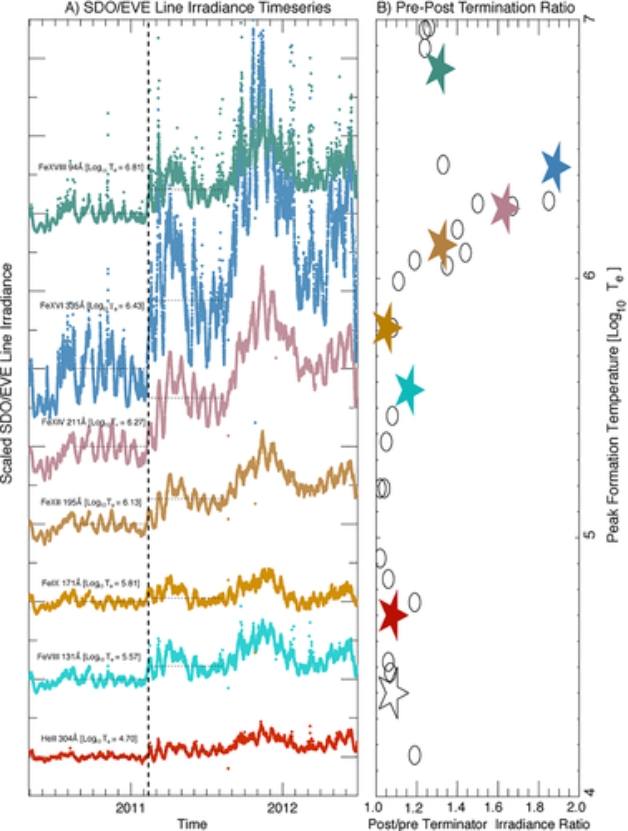 Image: The evolution of constituents of the Sun's spectral irradiance across the 2011 terminator as measured by SDO/EVE. Credit: Leamon, et al.

"We are not the first scientists to study how solar variability may drive changes to the Earth system," said Leamon. "But we are the first to apply the 22-year solar clock."

"The result– five consecutive terminators lining up with a switch in the El Nino oscillation– is not likely to be a coincidence."

The researchers also found that there was only a one in 5 000 chance or less that all five terminator events in the study would coincide with the switch in ocean temperatures. A sixth terminator event, and the corresponding start of a new solar cycle in 2020, has also coincided with a La Nina event.

"If further research can establish that there is a physical connection and that changes on the Sun are truly causing variability in the oceans, then we may be able to improve our ability to predict El Nino and La Nina events," said McIntosh.

The Sun provides the energy required to sustain life on Earth and drive our planet's atmospheric circulation. However, establishing a solid physical connection between solar and tropospheric variability has posed a considerable challenge. The canon of solar variability is derived from the 400 years of observations that demonstrates the waxing and waning number of sunspots over an 11(‐ish) year period. Recent research has demonstrated the significance of the underlying 22 years magnetic polarity cycle in establishing the shorter sunspot cycle. Integral to the manifestation of the latter is the spatiotemporal overlapping and migration of oppositely polarized magnetic bands. We demonstrate the impact of “terminators”—the end of Hale magnetic cycles—on the Sun's radiative output and particulate shielding of our atmosphere through the rapid global reconfiguration of solar magnetism. Using direct observation and proxies of solar activity going back some six decades we can, with high statistical significance, demonstrate a correlation between the occurrence of terminators and the largest swings of Earth's oceanic indices: the transition from El Niño to La Niña states of the central Pacific. This empirical relationship is a potential source of increased predictive skill for the understanding of El Niño climate variations, a high‐stakes societal imperative given that El Niño impacts lives, property, and economic activity around the globe. A forecast of the Sun's global behavior places the next solar cycle termination in mid‐2020; should a major oceanic swing follow, then the challenge becomes: when does correlation become causation and how does the process work?