The 2020–21 La Niña is likely to have peaked with respect to atmospheric and oceanic patterns in the tropical Pacific, the Australian Bureau of Meteorology said on February 2, 2021. All of the international climate models surveyed by the Bureau are anticipating NINO3.4 will return to borderline or neutral values by mid-autumn. It is typical for La Niña to continue to influence the Australian climate, even as the La Niña weakens.

Over the past fortnight, the sea surface temperatures across the Pacific Ocean basin have warmed by around 0.2 °C. 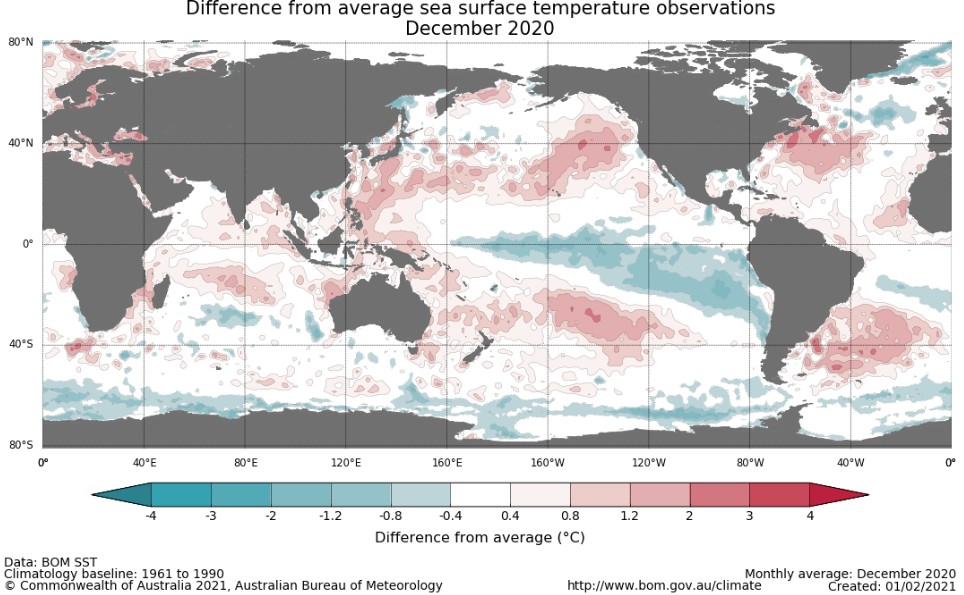 The 90-day Southern Oscillation Index (SOI) has decreased slightly but continues to remain well above the La Niña threshold of +7, and trade winds have returned to near-average strength in the central tropical Pacific.

Model outlooks indicate a return to neutral conditions (neither El Niño nor La Niña) during the late southern summer or early autumn.

The Southern Annular Mode (SAM) is positive, but is expected to tend towards neutral values over the next fortnight.

The Madden–Julian Oscillation (MJO) is currently located over the western Pacific Ocean.

Its influence on Australia is expected to weaken during the next fortnight as it moves east into the central Pacific.

However, active tropical weather may persist across northern Australia due to other regional weather factors.