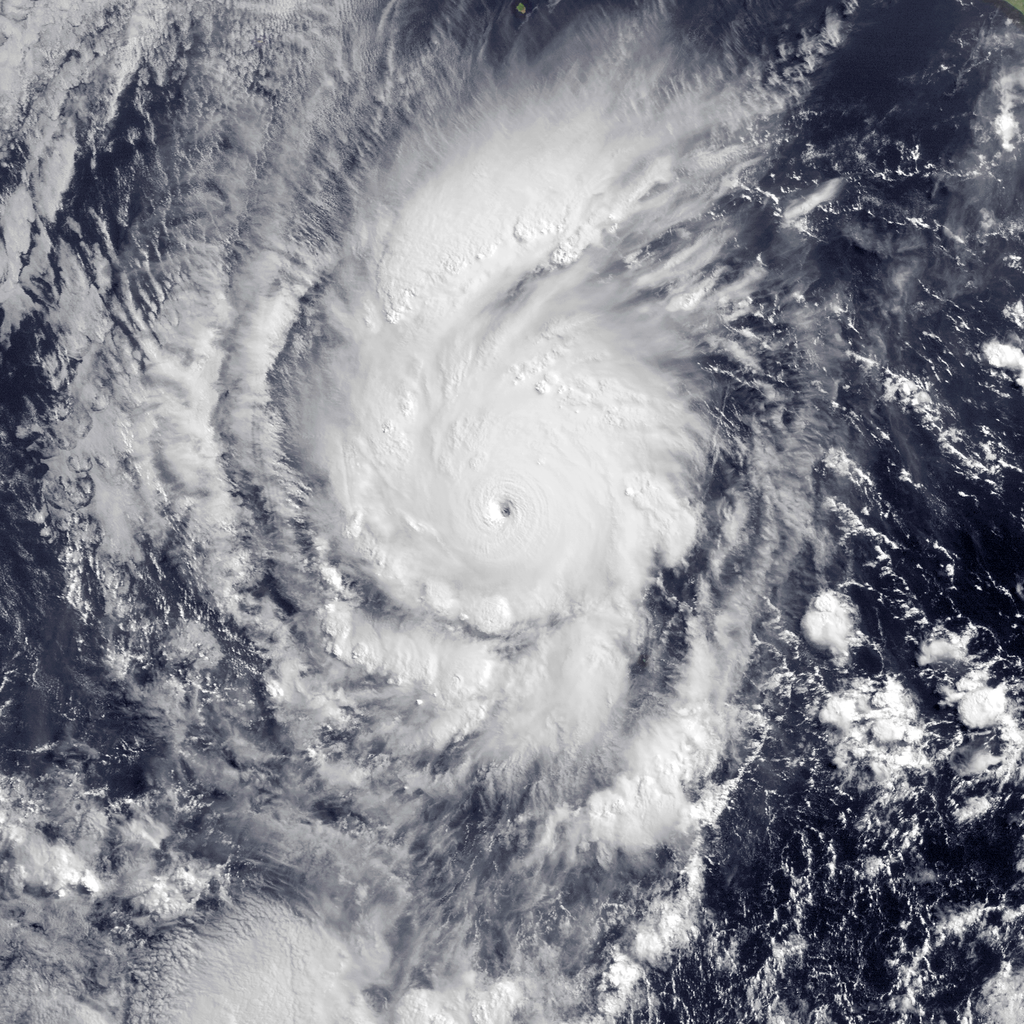 Researchers have found that instances of Atlantic tropical storms and hurricanes are usually reduced during an El Niño year. 2014 hurricane season just started and there is a strong potential for El Niño to develop during the next few months.

El Niño is a phenomenon where ocean surface temperatures become warmer than normal in the equatorial Pacific. Warm El Niño events are characterized by more tropical storms and hurricanes in the eastern Pacific and a decrease in the Atlantic, Gulf of Mexico and the Caribbean Sea.

Typical influence of El Niño on Pacific and Atlantic seasonal hurricane activity. (Map by NOAA Climate.gov, based on originals by Gerry Bell.)

Hurricane activity in the Atlantic basin is affected by  'El Niño– Southern Oscillation' (ENSO) remotely through changes in the Atlantic atmospheric circulation, largely through the vertical wind shear, which refers to the change in wind speed and direction between roughly 1 500 – 10 600 m (5 000 -35 000 ft) above the ground.

During El Niño period, the wind patterns are aligned in such a way that the vertical wind shear is increased over the Caribbean and Atlantic, preventing tropical disturbances from developing into hurricanes.  In addition to enhanced vertical wind shear, El Niño suppresses Atlantic hurricane activity by increasing the amount of sinking motion and increasing the atmospheric stability.

In the eastern Pacific, the wind patterns are altered in such a way to reduce the wind shear in the atmosphere, contributing to more storms.

Typical influence of La Niña on Pacific and Atlantic seasonal hurricane activity. Map by NOAA Climate.gov, based on originals by Gerry Bell.

La Niña has opposite impacts across the Pacific and Atlantic basins. Over the central and eastern subtropical Pacific, the enhanced trough is associated with stronger upper-level winds and stronger vertical wind shear, which suppress hurricane activity. Over the Atlantic basin, the anomalous upper-level ridge is associated with weaker upper- and lower- level winds, both of which reduce the vertical wind shear and increased hurricane activity. La Niña also favors increased Atlantic hurricane activity by decreasing the amount of sinking motion and decreasing the atmospheric stability.

Other climate patterns that influence hurricanes

The warm phase of the AMO reflects warmer sea surface temperatures across the Atlantic hurricane Main Development Region (MDR). A key atmospheric feature of this pattern is a stronger West African monsoon, which produces a westward extension of the upper-level easterly winds, along with weaker easterly trade winds in the lower atmosphere. 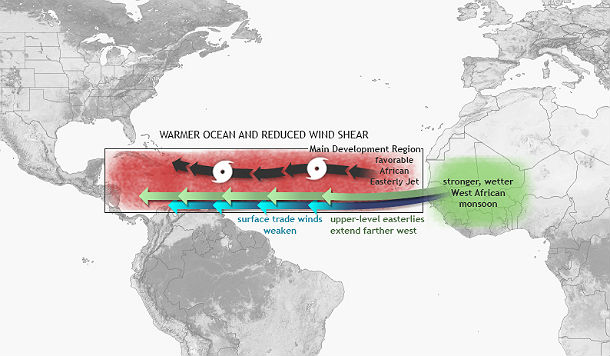 Climate patterns associated with the warm phase of the Atlantic Multi-decadal Oscillation (AMO). (Map by NOAA Climate.gov, based on originals by Gerry Bell)

This wind pattern is very conducive to increased Atlantic hurricane activity, partly because it results in weaker vertical wind shear. The weaker trade winds are also favoring hurricane development from tropical cloud systems moving westward from Africa. At the same time, these wind patterns are associated with a more northward push into the MDR of deep tropical moisture and unstable air, which favors stronger hurricanes.

This year the expectation that El Niño will develop, combined with the multi-decadal climate signals results in a forecast for a near- or below-normal season in the Atlantic, and a near- or above-normal season in both the central and eastern Pacific.

The predicted oceanic and atmospheric conditions across the MDR typify a near- or below-normal Atlantic hurricane season, and contrast with those seen throughout the current high activity era for Atlantic hurricanes that began in 1995. (Credit: NOAA/Climate.gov)

The Climate Prediction Center (CPC) predicts 14 to 20 named storms, 7 to 11 hurricanes and  3 to 6 major hurricanes. The Pacific season's first named storm, Amanda, developed on May 23, 2014. The next day, Amanda intensified into a category 4 hurricane.