Kizimen volcano, (Kamchatka) which erupted for the first time in 81 years in December 2010, continues to emit gas and ash. The Moderate Resolution Imaging Spectroradiometer (MODIS) on NASA’s Terra satellite captured these natural-color (top) and false-color (bottom) views of the continuing eruption on November 1, 2012. Though the plume is difficult to detect in the true-color image, it shows up clearly in false-color because of the different combination of bands used to create the two images. In the false-color image, snow and ice appears bright red and vegetation looks green. 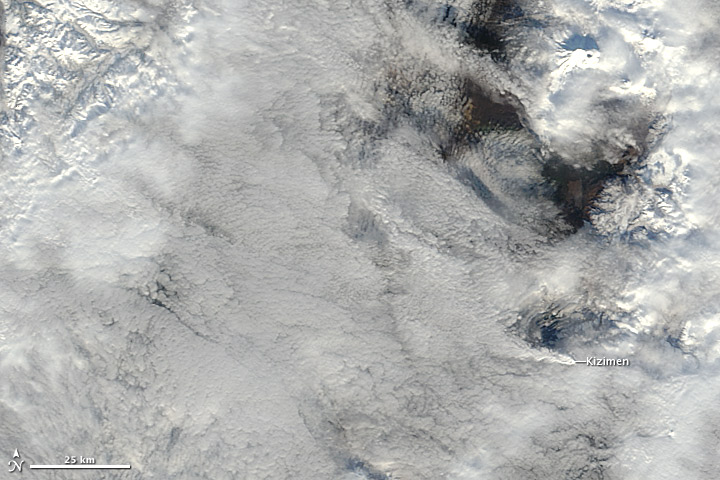 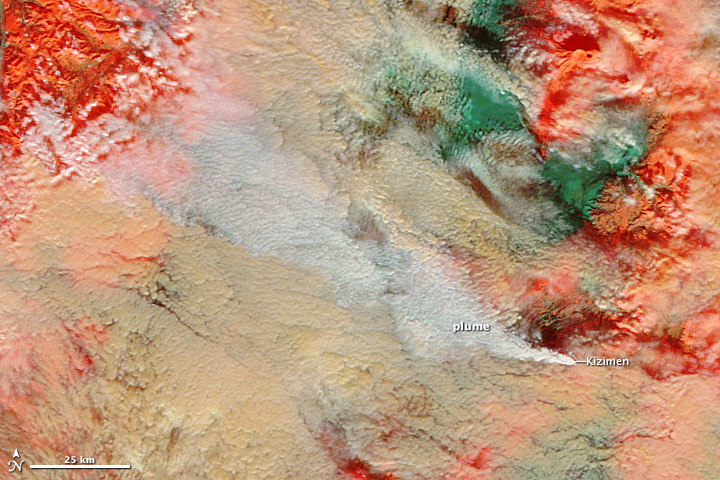 Kizimen is an isolated, conical stratovolcano that is morphologically similar to Mount St. Helens prior to its 1980 eruption. The summit of Kizimen consists of overlapping lava domes, and blocky lava flows descend the flanks of the volcano, which is the westernmost of a volcanic chain north of Kronotsky volcano. The 2376-m-high Kizimen was formed during four eruptive cycles beginning about 12,000 years ago and lasting 2000-3500 years. The largest eruptions took place about 10,000 and 8300-8400 years ago, and three periods of long-term lava dome growth have occurred. The latest eruptive cycle began about 3000 years ago with a large explosion and was followed by lava dome growth lasting intermittently about 1000 years. An explosive eruption about 1100 years ago produced a lateral blast and created a 1.0 x 0.7 km wide crater breached to the NE, inside which a small lava dome (the fourth at Kizimen) has grown. Prior to 2010, only a single explosive eruption, during 1927-28, had been recorded in historical time. (GVP)