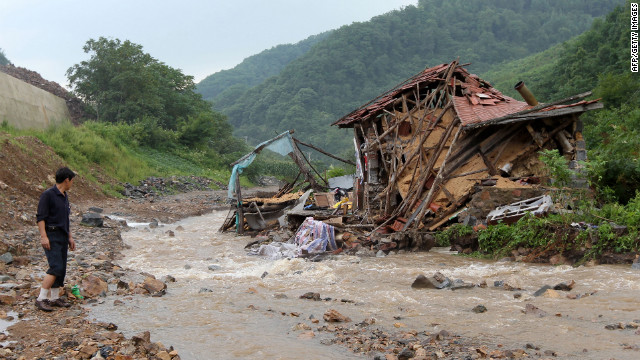 The downpours have been rolling over the impoverished country for more than a week, sweeping away crops and destroying buildings, the state-run Korean Central News Agency (KCNA) said in reports over the weekend.

Heavy rain across large swathes of North Korea has caused widespread flooding and more damage is reported still to come.

“Most areas of the Democratic People’s Republic of Korea (DPRK) are expected to suffer big damage from continuous downpour accompanied by thunder and storm,” KCNA reported.

The destruction of farmland is of particular concern in a country that struggles to feed itself. The United Nations reported more than 30,600 hectares (75,600 acres) of arable land was affected.

The World Food Programme said Friday, August 3, 2012 that it is sending a first round of emergency food aid that will provide rations of 400 grams (14 ounces) of maize per day for 14 days.

Employees from humanitarian groups that operate inside North Korea describe severe malnourishment on a large scale. A deal earlier this year for the United States to ship food aid to the country fell apart after the regime went ahead with a controversial rocket launch.