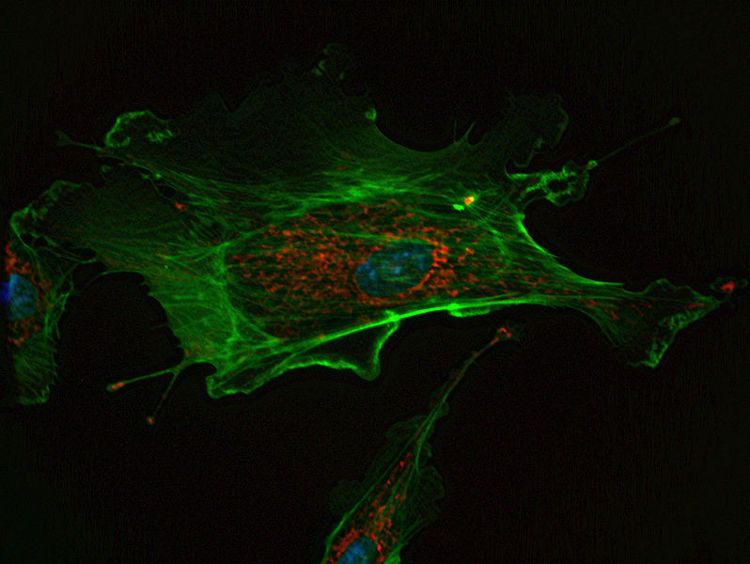 A team of researchers at NASA's Johnson Space Center in Houston and Lawrence Berkeley National Laboratory in Berkeley, Calif., has found radiation from protons could further enhance a process that occurs during tumor progression. This information may help lead to better methods to protect astronauts from the harmful effects of radiation in space, as well as help cancer researchers on Earth better understand the effects of radiation treatment on the human body.

NASA is particularly interested in this research because protons, which are charged subatomic particles, are the main source of space radiation astronauts receive during spaceflights. The study was part of NASA's ongoing effort to learn how to mitigate the effects of radiation during long-duration missions to destinations beyond low Earth orbit, such as asteroids and Mars.

"Our paper makes new discoveries on the potential risks from low doses of protons that occur outside of the tumor during radiation therapy, and to all tissues for astronauts exposed to space radiation," said Francis A. Cucinotta, chief scientist for the Human Research Program Space Radiation Program Element at Johnson and one of the authors of the paper.

The objective of the researchers was to study the biological effects of low-energy protons on epithelial cells (membranous tissues found throughout the body) and the protons' propensity to enhance a process that occurs during tumor progression. This process is called epithelial-mesenchymal transition (EMT), which has been associated with cancer progression. EMT also has been linked to radiation-induced fibrosis, one of the most common late effects of radiotherapy.

Notably, the study revealed protons alone can induce EMT-associated changes in normal human epithelial cells. Although the total body dose received in space is moderately low compared to what is received in radiotherapy, this study reveals that low doses of protons still may prompt EMT and result in potentially detrimental effects.

These studies were conducted at Johnson and at the NASA Space Radiation Laboratory at Brookhaven National Laboratory, Upton, N.Y.

Results of the study were published as "Protons Sensitize Epithelial Cells to Mesenchymal Transition" in the July 23 issue of the journal PLoS ONE.