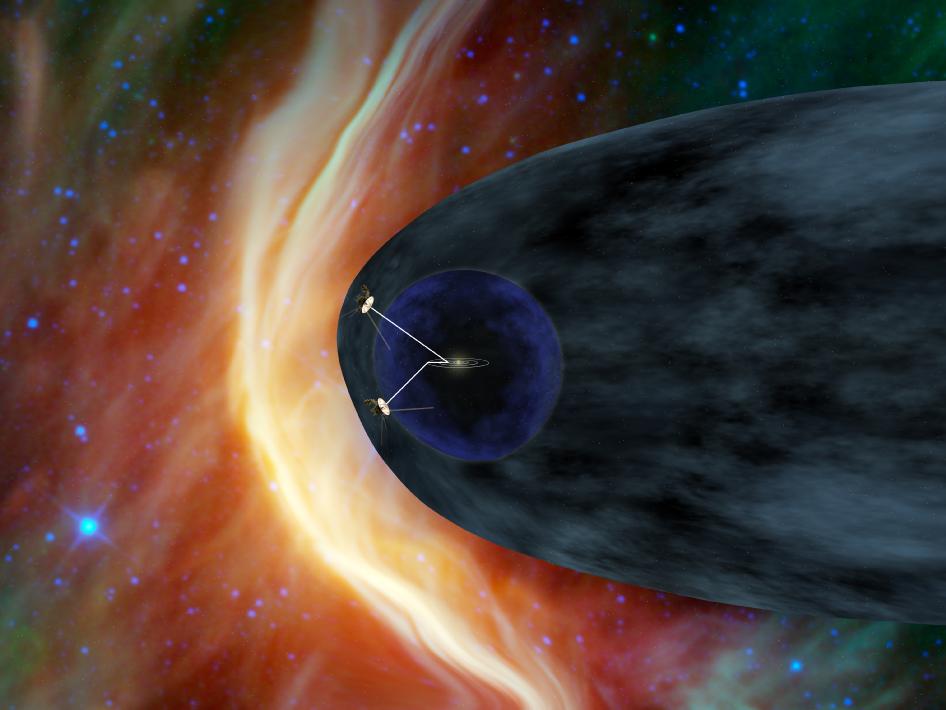 According to new data from NASA’s Voyager 1 spacecraft two of three key signs of changes expected to occur at the boundary of interstellar space have changed faster than at any other time in the last seven years.

For the last seven years, Voyager 1 has been exploring the outer layer of the bubble of charged particles the sun blows around itself. In one day, on July 28, data from Voyager 1’s cosmic ray instrument showed the level of high-energy cosmic rays originating from outside our solar system jumped by five percent. During the last half of that same day, the level of lower-energy particles originating from inside our solar system dropped by half. However, in three days, the levels had recovered to near their previous levels.

A third key sign is the direction of the magnetic field, and scientists are eagerly analyzing the data to see whether that has, indeed, changed direction. Scientists expect that all three of these signs will have changed when Voyager 1 has crossed into interstellar space. A preliminary analysis of the latest magnetic field data is expected to be available in the next month.

“These are thrilling times for the Voyager team as we try to understand the quickening pace of changes as Voyager 1 approaches the edge of interstellar space,” said Edward Stone, the Voyager project scientist based at the California Institute of Technology, Pasadena, Calif. “We are certainly in a new region at the edge of the solar system where things are changing rapidly. But we are not yet able to say that Voyager 1 has entered interstellar space.”

“The increase and the decrease are sharper than we’ve seen before, but that’s also what we said about the May data,” Stone said. “The data are changing in ways that we didn’t expect, but Voyager has always surprised us with new discoveries.”

“Our two veteran Voyager spacecraft are hale and healthy as they near the 35th anniversary of their launch,” said Suzanne Dodd, Voyager project manager based at NASA’s Jet Propulsion Laboratory, Pasadena. “We know they will cross into interstellar space. It’s just a question of when.”

Featured image: Voyagers in the Heliosheath

This artist’s concept shows NASA’s two Voyager spacecraft exploring a turbulent region of space known as the heliosheath, the outer shell of the bubble of charged particles around our sun. After more than 33 years of travel, the two Voyager spacecraft will soon reach interstellar space, which is the space between stars.

Our sun gives off a stream of charged particles that form a bubble around our solar system known as the heliosphere. The solar wind travels at supersonic speeds until it crosses a shockwave called the termination shock. That part of our solar system is shown in dark blue. Voyager 1 crossed the termination shock in December 2004 and Voyager 2 did so in August 2007. Beyond the termination shock is the heliosheath, shown in gray, where the solar wind dramatically slows down and heats up. Outside those two areas is territory dominated by the interstellar wind, which is blowing from the left in this image. As the interstellar wind approaches the heliosphere, a bow shock forms, indicated by the bright arc.

The Voyagers were built by NASA’s Jet Propulsion Laboratory in Pasadena, Calif., which continues to operate both spacecraft. JPL is a division of the California Institute of Technology in Pasadena. The Voyager missions are a part of the NASA Heliophysics System Observatory, sponsored by the Heliophysics Division of the Science Mission Directorate.

For more information about the Voyager spacecraft, visit: http://www.nasa.gov/voyager