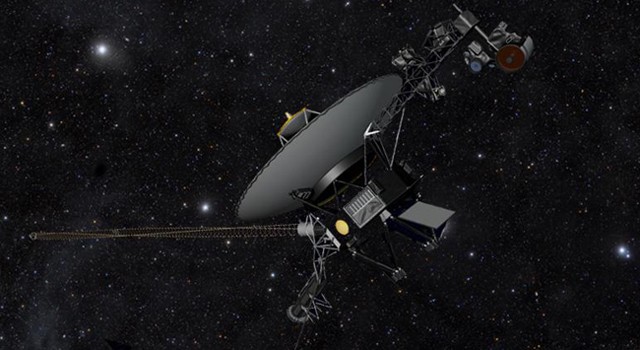 It's finally official, Voyager 1 spacecraft is now in the interstellar space. The 36-year-old probe is now about 19 billion kilometers (12 billion miles) from our Sun traveling at a speed of about 61 155 km/h (38 000 mph).

New and unexpected data indicate Voyager 1 has been traveling for about one year through plasma, or ionized gas, present in the space between stars. Voyager is in a transitional region immediately outside the solar bubble, where some effects from our Sun are still evident. A report on the analysis of this new data, an effort led by Don Gurnett and the plasma wave science team at the University of Iowa, Iowa City, is published in today's edition of the journal Science.

Whether and when NASA's Voyager 1 spacecraft, humankind's most distant object, broke through to interstellar space, the space between stars, has been a thorny issue. For the last year, claims have surfaced every few months that Voyager 1 has "left our solar system." Why has the Voyager team held off from saying the craft reached interstellar space until now?

"We have been cautious because we're dealing with one of the most important milestones in the history of exploration,” said Voyager Project Scientist Ed Stone of the California Institute of Technology in Pasadena.  “Only now do we have the data – and the analysis – we needed."

"Now that we have new, key data, we believe this is mankind's historic leap into interstellar space," he said. "We can now answer the question we've all been asking — 'Are we there yet?' Yes, we are." 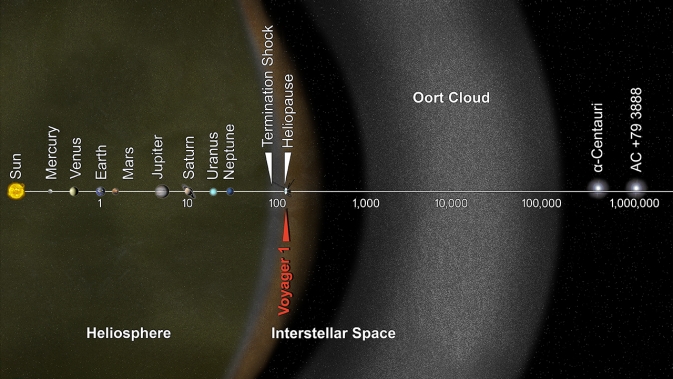 This artist's concept puts huge solar system distances in perspective. The scale bar is measured in astronomical units (AU), with each set distance beyond 1 AU representing 10 times the previous distance. Each AU is equal to the distance from the sun to the Earth. It took from 1977 to 2013 for Voyager 1 to reach the edge of interstellar space. Image credit: NASA/JPL-Caltech 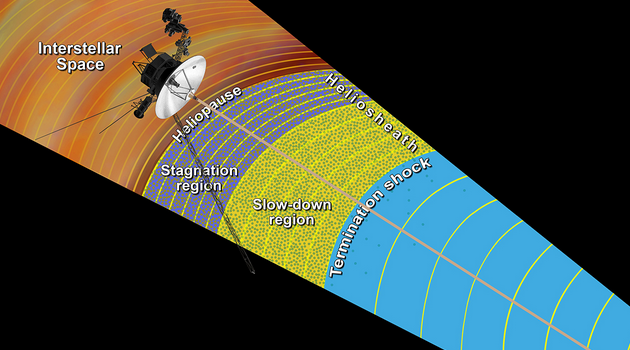 This illustration shows the outer layers of our solar bubble, or heliosphere, and the interstellar space that Voyager 1 is currently investigating. Image Credit: NASA/JPL-Caltech

Voyager 1 first detected the increased pressure of interstellar space on the heliosphere, the bubble of charged particles surrounding the Sun that reaches far beyond the outer planets, in 2004. Scientists then ramped up their search for evidence of the spacecraft's interstellar arrival, knowing the data analysis and interpretation could take months or years.

Voyager 1 does not have a working plasma sensor, so scientists needed a different way to measure the spacecraft's plasma environment to make a definitive determination of its location. A coronal mass ejection, or a massive burst of solar wind and magnetic fields, that erupted from the Sun in March 2012 provided scientists the data they needed. When this unexpected gift from the Sun eventually arrived at Voyager 1's location 13 months later, in April 2013, the plasma around the spacecraft began to vibrate like a violin string. On April 9, Voyager 1's plasma wave instrument detected the movement. The pitch of the oscillations helped scientists determine the density of the plasma. The particular oscillations meant the spacecraft was bathed in plasma more than 40 times denser than what they had encountered in the outer layer of the heliosphere. Density of this sort is to be expected in interstellar space.

The plasma wave science team reviewed its data and found an earlier, fainter set of oscillations in October and November 2012. Through extrapolation of measured plasma densities from both events, the team determined Voyager 1 first entered interstellar space in August 2012.

"We literally jumped out of our seats when we saw these oscillations in our data — they showed us the spacecraft was in an entirely new region, comparable to what was expected in interstellar space, and totally different than in the solar bubble," Gurnett said. "Clearly we had passed through the heliopause, which is the long-hypothesized boundary between the solar plasma and the interstellar plasma."

The new plasma data suggested a timeframe consistent with abrupt, durable changes in the density of energetic particles that were first detected on Aug. 25, 2012. The Voyager team generally accepts this date as the date of interstellar arrival. The charged particle and plasma changes were what would have been expected during a crossing of the heliopause.

"The team's hard work to build durable spacecraft and carefully manage the Voyager spacecraft's limited resources paid off in another first for NASA and humanity," said Suzanne Dodd, Voyager project manager, based at NASA's Jet Propulsion Laboratory, Pasadena, Calif. "We expect the fields and particles science instruments on Voyager will continue to send back data through at least 2020. We can't wait to see what the Voyager instruments show us next about deep space."

Voyager 1 and its twin, Voyager 2, were launched 16 days apart in 1977. Both spacecraft flew by Jupiter and Saturn. Voyager 2 also flew by Uranus and Neptune. Voyager 2, launched before Voyager 1, is the longest continuously operated spacecraft. It is about 9.5 billion miles (15 billion kilometers) away from our Sun.

Voyager mission controllers still talk to or receive data from Voyager 1 and Voyager 2 every day, though the emitted signals are currently very dim, at about 23 watts — the power of a refrigerator light bulb. By the time the signals get to Earth, they are a fraction of a billion-billionth of a watt. Data from Voyager 1's instruments are transmitted to Earth typically at 160 bits per second, and captured by 34- and 70-meter NASA Deep Space Network stations. Traveling at the speed of light, a signal from Voyager 1 takes about 17 hours to travel to Earth. After the data are transmitted to JPL and processed by the science teams, Voyager data are made publicly available.

"Voyager has boldly gone where no probe has gone before, marking one of the most significant technological achievements in the annals of the history of science, and adding a new chapter in human scientific dreams and endeavors," said John Grunsfeld, NASA's associate administrator for science in Washington. "Perhaps some future deep space explorers will catch up with Voyager, our first interstellar envoy, and reflect on how this intrepid spacecraft helped enable their journey."

Scientists do not know when Voyager 1 will reach the undisturbed part of interstellar space where there is no influence from our Sun.

Voyager 1 is working with a finite power supply and has enough electrical power to keep operating the fields and particles science instruments through at least 2020, which will mark 43 years of continual operation. At that point, mission managers will have to start turning off these instruments one by one to conserve power, with the last one turning off around 2025.

It will continue sending engineering data for a few more years after the last science instrument is turned off, but after that it will be sailing on as a silent ambassador. In about 40,000 years, it will be closer to the star AC +79 3888 than our own Sun. (AC +79 3888 is traveling toward us faster than we are traveling towards it, so while Alpha Centauri is the next closest star now, it won't be in 40,000 years.) And for the rest of time, Voyager 1 will continue orbiting around the heart of the Milky Way galaxy.

NASA hosted a news conference to discuss Voyager mission today. If you missed it, you can watch it in the video below. The audio starts at 3:35.

Location of Voyager 1 on the sky

Earlier this year, the National Science Foundation's Very Long Baseline Array telescope turned its gaze to Voyager 1 and captured an image of this iconic spacecraft's faint radio signal. The Green Bank Telescope also detected Voyager's signal, picking it out from the background radio noise in less than one second. 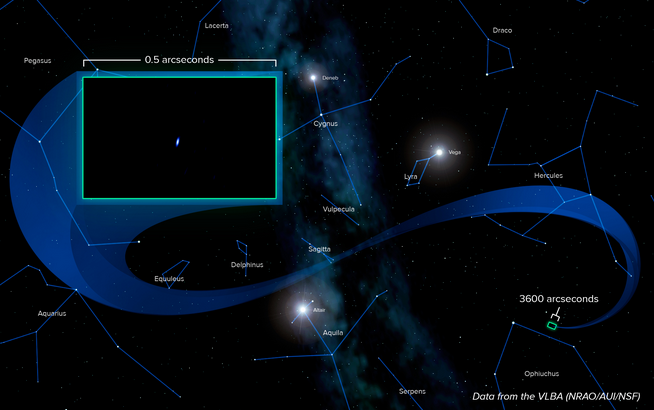 Artist's impression of Voyager 1's position on the sky when observed by the Very Long Baseline Array (VLBA) on February 21, 2013. The actual image from the data (enlarged section) is 0.5 arcseconds across. The radio signal as shown is a mere 1 milliarcsecond across. Credit: Alexandra Angelich, NRAO/AUI/NSF.

Featured image: This artist's concept shows the Voyager spacecraft traveling through space against a field of stars. Image courtesy of NASA/JPL-Caltech.